I have neglected this blog for far too long, and if you now find yourself agreeing with this statement, perhaps muttering something like “damn right! update already!”, then you should know that you are by no means alone in expressing this sentiment.

Anyway, one of the blocks in my mind that has been holding me back from writing here has been my desire to summarize my amazing summer of fieldwork in a single post. This is not an easy task. Looking back through what I did and what I wrote here, I find it difficult to summarize my summer in a reasonable fashion.

When I tell people what I did this past summer, I usually describe my activities as a giant transect of the Eastern half of North America. This isn’t really accurate, since I only sampled a fraction of the aquatic ecosystems East of the 100th meridian. I do think I visited a pretty good representative sample of those ecosystems, but to describe my activities as a “transect”, a term with a clear definition in ecological statistics, is probably not really correct.

I opened this series on my summer, this “travelblogue”, with a brief description of my plans. Rather than recap that here, or try to quantify my success in achieving the goals I had laid out for myself, I’d like to talk about the impact this summer had on my life and how I think about my career and this business of science more generally. I’m still going to have to recap my summer, but I think I can do this in a way that isn’t just a link-fest or massively redundant.

I’m glad I started by dividing the summer into 4 parts – this turned out to be a logical and useful way of categorizing my activities. Each part was distinct from the others in several ways – I travelled with different people, and I scheduled my days in different ways, quite apart from the obvious differences among the research sites I sampled. I was one member of a partnership of two in Part I. Matt and I worked together on nearly every aspect of our trip through the Eastern U.S.A. We had an overall schedule, based mainly on my need to return to Guelph in time to depart with other people on Part II. But while I had planned approximately where we would stay each night in the U.S., we deviated from that plan almost immediately. Instead of spending 3 nights in Georgia, we spent 4. We lingered longer in North-Central Florida than I had anticipated, by about a day. Local conditions, especially drought, restricted the number of sampling sites we visited at the extreme southern end of our journey. And of course, Alabama sucks, a fact that surprised us.

During Part II, rather than travelling in an equal partnership with one other PhD candidate, I accompanied a somewhat mixed group of people. The limits of budget and what can be accomplished by a single person working alone dictate the details of some travels, as I’m sure most people are aware. While ideally I would have liked to sample Northern Ontario and Manitoba in a manner similar to how I’d sampled Georgia, instead I camped at one location for several days, and repeatedly sampled a few locations.

This trend of more time at fewer places was extended upon my arrival at Churchill in Part III. I visited Churchill last year, so I already had a pretty good idea of what to expect in terms of daily schedules and the types of sites I can visit. I didn’t use the Zodiac of Adventure very much at all last year, but I had lots of fun with it this year. The feature of working in Churchill that perhaps stands out most in my mind was the bear gun. I worked with 7 other people while at Churchill, and I was 1 of only 2 people licensed to carry a firearm. The other license-holder refused to share this duty, so I was left holding the gun every day we had access to one. While I admit that I felt pretty bad-ass for the first 20 minutes on the first day I carried a CNSC shotgun, the novelty wore off quickly. I was glad to have the gun when we did encounter a polar bear, but most of the time it was heavy, awkward, and socially disruptive. There’s no surer way to end a conversation than to work the action on a 12-gauge pump a few times. That sound is unique, and instantly recognizable to any person who has seen an action movie. It carries a certain malice or threat with it, and gathers to itself and its weilder every person’s attention. It’s a good thing my fear of public speaking was burned out of me by my armour-piercing voice many years ago. 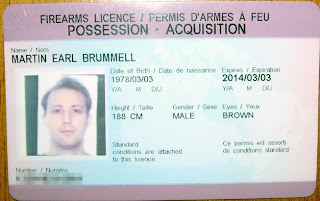 My firearms license, technically referred to as a Posession and Acquisition License, or PAL. It really wasn’t that difficult to get, a fact that may be surprising to those people who believe Canada operates very restrictive gun control.

Guns and the polar bear concern were still around in Part IV, but to a much reduced degree. Fieldwork alone was still impossible in the Far North, but this has less to do with the predators and more to do with everything else that can possibly go wrong. “Weather and mechanical permitting” applies everywhere, I think, but the frequency distribution of unfortunate events across space and time has a peak in the High Arctic. I was essentially alone for the final part of my summer, right as I entered the region of North America where working in groups is most important. There is probably some irony in that, somewhere. Meeting new people primarily for the purpose of working with someone was a major aspect of my social activities in the Far North. By the end of my visit to Resolute, in those last couple of days before flying South, this odd kind of social interaction was not even subconscious: I deliberately introduced myself to people as an individual in need of a field assistant. It’s kind of an odd way to meet somebody for the first time; one basically talks in euphemisms for “can I trust you with my life for a few hours?”.

Perhaps this review sounds a little negative. It should not, for I had a truly wonderful time all summer. I basically dislike waking up in the morning, those who know me know I am no morning person. But while a 7:00am alarm while at home is cause for despair, during my travels such things did not bother me. Every day was an adventure, which is to say every day had its share of sub-lethal misfortune. Whatever doesn’t kill me makes me stronger, and all that.

So, how did this amazing summer shape my view of myself, my career, and the process of scientific investigation?

First, some introspection. I did accomplish some things in ways that impressed myself, so I suppose my general self-esteem and self-confidence were improved by this summer. But that seems a minor effect. Rather than demonstrating what I can do, I think of this summer as showing me more of what I would most like to do. I wasn’t surprised by my conduct during the bear encounter, possibly the single most significant event this summer from a perspective of personal introspection. I was quite happy with how that all turned out; the interesting part is that I’d be quite happy to go out and do such things again. Meeting a bear on a desolate Northern beach was not an encounter that turned me off of fieldwork; quite the opposite, in fact, I’d like the to spend more time in such environments, as I now have a great deal of confidence (and solid empirical evidence) that I can work effectively under such conditions.

Career-wise, there were two great and related realizations for me that came out of this summer. First, the component of my PhD project that I think I most enjoy is the Biogeography side of things. I had inklings in this direction while I was studying for my PhD exams; the textbook “Biogeography” that I read was actually enjoyable in places, but getting outside and really seeing the world from a biogeographic perspective was the real eye-opener. Second, the Arctic really appeals to me. I had a great time in Florida, but I really felt most enthusiastic about my research when I was in Churchill, Resolute, and Truelove. I would frequently stop and just look around, thinking about how great it was that I had this opportunity to visit such spectacular places. These two realizations together of course suggest that I will be happiest in my work if my work involves the patterns and processes of distributions of species at high latitudes. That shouldn’t be too difficult to work into a grant proposal.

My view of scientific investigation, the process of doing science, was not shaken or drastically challenged by this summer. Rather, I was exposed in considerable detail to aspects of science that I had previously had only a murky view of. This includes fieldwork in general, of course, since prior to this summer I had only last year’s visit to Churchill and some day-trips around Guelph as my experiences. My undergraduate degree included little in the way of fieldwork as it is actually practiced, and my M.Sc. work was entirely in the laboratory. I like fieldwork. I even like the crappy stuff that goes with it – I would have emptied the shit bucket at Truelove, but Steve beat me to it (he’s more of a morning person than I). Not that I enjoy outhouse maintenance, but it bothers me much less than it does some other people.

I met a large number of other people, many of whom were also engaged in the outdoors side of science. Their projects also looked like great fun, and it was pretty gratifying to have people engaged in fascinating research on climatology, robotics, space science, geology, paleontology, etc. etc. tell me that my project sounded really intersting. I already suspected that Biology and Geology were the academic fields that perhaps attract the greatest numbers of people who want to go camping first, and do science (a close) second, but I got to see and talk with many of these people this summer. Please do not take this as a criticism, or as some ranking of scientific vigour among my colleagues. The people I met (like all people) cannot easily be reduced to a ranked list of interests.

Sorry again about the long delay in my posts here. More interesting stuff than the above wandering musings to come, I promise.

Good to see that you're finally updating, and with a fresh take on things too. Keep 'em coming; I'll encourage people here to read. Hope you're having fun now, wherever you are.

Sorry for not reading this yesterday, but I admit that I stopped checking your blog on a daily basis...

I'm glad to hear that your overall summer experiences were positive. Mine own work will, of course, most likely never involve fieldwork, and thus I must live vicariously through my ecologically oriented friends.

I do hope to write a similar recap/what I've learned post in the future though, but about my whole Ph.D.