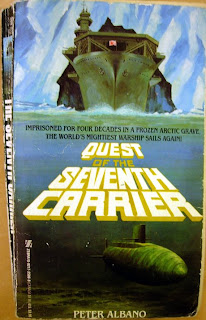 This book is terrible, but as soon as I saw the description on the back cover, I knew I had to read it despite the promise of utter ridiculousness. I’ll just quote that back cover verbatim, then describe a few of the many things in this book that caused the heavy-lift crane I was using to suspend my disbelief to topple into the literary pit of doom (metaphorically speaking, of course).

OUT OF THE ICE…
On the eve of the 1941 surprise attack on Pearl Harbor, the awesome 84,000-ton Japanese supercarrier Yonaga was trapped by an unexpected glacial shift and frozen in an Arctic iceberg. Now, more than forty years later, a deadly Chinese orbiting particle-beam laser that has rendered the Earth’s high-tech weaponry useless has also freed the forgotten warship from its icy prison. The Yonaga sails again, suddenly the most lethal fighting machine in the world’s dwindling arsenal of destruction!
..INTO THE FIRE
Power bases have shifted dramatically over the past four decades – and now a Libyan madman has the upper hand, planning to mercilessly crush his Western enemies with an overwhelming army of ten million Arab fanatics. Only Yonaga and her indomitable samurai crew can save the besieged free world from the devastating iron fist of a terrorist maniac – as the floating behemoth leads a rag-tag armada of rusty World War Two warships against impossible odds on a fiery sea of blood and death!

Leaving aside the increasingly-ludicrous description on the back of the book, this book is basically bad. I don’t want to spend too much time dwelling on how stupid this book is, so I’ll not talk too much about the sloppy editing, sloppy page-setting, wooden dialogue, boring action sequences, cardboard-cut-out clichéd characters, or many other problems. Rather, I’d like to talk about the weirdest feature of this very weird (in a bad way) book: it reads like the middle book of a trilogy, but no mention is made anywhere of other books in this series.

The whole part of the story concerning the freezing of the ship, its long imprisonment, or its 42-years-late attack on Pearl Harbor, plus the launch and critical malfunction of the Chinese satellites and the resulting shift in global geopolitics, all happens before this book starts. There are frequent references in the text to major events (battles, love affairs) the main characters were involved in prior to the start of this book, but no details are provided. The end of the book is not a cliff-hanger, but it certainly does not feel like the end of the story, strongly suggesting a sequel. Despite the obvious hints at a series rather than a single, 381-page story, the usual if-you-liked-this-you’ll-also-like-these lists of other books at the front and back of this book contain no other books by Mr. Albano, nor any books that, from the blurbs, seem thematically related.

Finally, I’d like to return to the back cover description. It’s all lies. The Yonaga is described as 82,000 tons inside, not 84,000. It was never frozen in an Arctic iceberg, rather it was imprisoned “behind a suddenly sliding glacier” somewhere on the Siberian North-East coast (where nobody saw it for 42 years, despite significant Soviet and American military activity in that area). The Chinese satellites are plural, and are described as shooting down all rockets and jet engines, including small hand-held rockets such as RPGs. It does nothing to other technologies, like radar or computers, yet for some reason every aircraft in this book is WWII vintage, and no modern turboprops are used, ever, despite this book taking place about 2 years after the launch of the satellites. The laser satellites were launched several weeks after the Yonaga sailed South and attacked Pearl Harbor, and had nothing to do with the Yonaga being freed from the ice. The rise in geopolitical power of Moammar Khadafy is described as being triggered by a simultaneous loss of air superiority by a jet- and rocket-dependent NATO and a world-wide oil embargo by OPEC. No mention is made of, say, the massive arsenals of non-flying conventional weapons owned by NATO and the Warsaw Pact, nor of the significant advances in electronic technologies since 1941. The “samurai crew” are just plain stupid, a collection of 60-year-old men who act 20 and take orders from a 100-year-old admiral who acts 30. And there’s no “impossible odds”, and no “rag-tag armada” in sight.

Overall, I highly recommend not reading this book. If you want a silly page turner, I would recommend something border-line plausible from Dean Koontz or one of his imitators. If you want to distract yourself from all that is good and entertaining about the written word, then by all means pick up this book. Don’t read it, but maybe if you pick it up and put it down a few hundred times you’ll work some key muscles.
Posted by TheBrummell at 10:00 pm
Labels: Reviews, Summer 2008

Kind of makes you want to write your own crappy novel with an outlandish and fantastically over the top back cover blurb, eh?

Ever thought of doing one of those Novel Writing Month challenges?

Ever thought of doing one of those Novel Writing Month challenges?

You know, I should really try one of those some time. There are a few ideas bouncing around in my brain (and my auxiliary brain, aka my computer's harddrive) that could blossom into a groan-inducing, poorly structured pulpy novel, I'm sure.

Thanks for sharing this old movie,allow me to share you my mens trousers experience.