This morning I awoke to my alarm clock at about 6:30, and found myself gently swaying along in the early-morning light on the train. The shower stall in the sleeper car on the train is small but quite efficient; I was particularly amused watching the water drain directly down onto the tracks. This is why you’re not allowed to shower or flush the toilets when the train is stopped. I had a chance today to reflect a bit on Part III of this summer.

The Churchill Northern Studies Centre (CNSC) maintains a fairly strict meal schedule that in turn essentially dictates the rest of one’s schedule. While there were several days we spent away from the station through lunchtime and ate prepared-by-us sandwiches, most of the time our days were divided into three parts: morning, afternoon, and evening. Most field work has to happen during the hours of good daylight, both for bear safety and avoiding the very worst of the mosquitoes, so most evenings were spent on lab work. Unlike last year, when I was dissecting every critter I caught at the CNSC, this year my lab work consists primarily of sorting specimens into cryotubes, deep-freezing them, and keeping track of the bookkeeping (location details, inventory of dry shipper contents, etc.).

Because it was free and always available, and because I like it, I drank quite a lot of coffee while in Churchill. Last year I nearly overdosed on the stuff, ramping up consumption from a pre-fieldwork level of less than 1 cup per day to over 6 per day; this year I think I hit an average of about 4 cups per day. Free coffee makes me happy.

The choice of whether we were visiting terrestrial and freshwater sites, or marine sites each day depended to a large extent on the tides. As I described in a few of the earlier posts, sometimes the best low tides that expose the most beach and therefore potentially the most diversity and abundance of intertidal animals occur at horribly inconvenient times of day. There were actually a few good low tides after 10:00pm, but those are even worse than the 7:30am tides as far as practical (and safe) work is concerned.

Unlike Parts I and II (links), Part III was not a travel-and-sample piece of work, rather I slept every night in the same bed, but drove around the local countryside to sample the animals. Most of this daily running about happened in our trusty 1982 Chevrolet Suburban, already mentioned in previous posts. 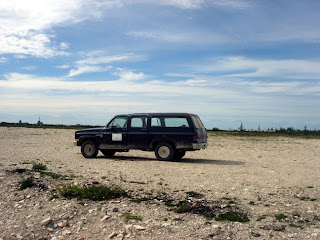 Our trusty Suburban, sitting on what might once have been a rocket launching pad.

We also spent some time in the Zodiac of Adventure, which was so named because every time we used it something unexpected happened. The motor on that boat, a little 15-hp Yamaha, is both surprisingly heavy and very much in need of some maintenance – a full strip-down-and-rebuild, in my opinion. Plus, a new prop, a thorough oil and lubricants change, and a thorough once-over with a patch kit on the hull. I base this assessment mainly on the fact that we were never fully confident the motor would actually start when we needed it to, or that it would keep running when we were driving around, and on the fact of the slow leak in the bottom of the hull. We didn’t keep the Zodiac of Adventure as fully inflated as perhaps we should, because we found that it rode ridiculously high out of the water when the keel compartment was very full. I suspect that the leak of water into the boat could be slowed or maybe even stopped by filling that air compartment to some high internal pressure. Still, that thing was lots of fun, and took us to some great places. 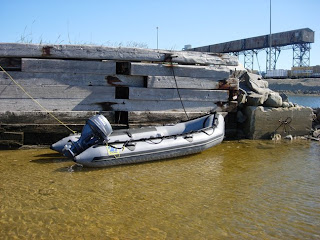 As I mentioned above, we stayed at the CNSC. They have bunk beds, solidly constructed things of 2x4s and plywood. Less nice than my bed at home or most motel rooms, but nicer than the wobblier metal bunk beds I’ve also met, and certainly I slept reasonably well. Being a short walk from excellent breakfast was a big plus, too.

Unlike previous parts of this summer, most of the other people I met during Part III were either scientists or people whose jobs include helping scientists. I didn’t spend much time talking with the other researchers at the CNSC, except for an enjoyable if brief conversation with a woman doing her PhD in New York on polar bears, by examining their droppings. Contrary to popular belief, or, as she put it, “the media”, polar bears in summer are neither starving nor eating only seals. Their droppings include large amounts of feathers (from Snow Geese, mainly) and other terrestrial-animal remains, as well as surprising volumes of plant matter, suggesting the bears have been eating seeds and berries. She also pointed out that one of the lab benches our group would be using had been used by her to sort bear shit, and therefore we might want to bleach it down if we were going to be doing anything particularly sensitive to contamination.

The Hudson Bay lowlands are flat and close to sea level, with patches of bedrock sticking up through the tundra and the occasional slowly-moving river. The vegetation is a mix of thick, mossy tundra and patchy boreal forest with a thick forest floor of large lichens. The underlying permafrost marks everything, by trapping water and creating the huge number of ponds and fens and bogs in the area. Overall, Churchill looks very different from anywhere else I’ve been this summer.

I visited the CNSC for 4 weeks last year, so I mostly visited places I’d been before. Remembering how to get to, for example, Bluffs A was a bit of an adventure, but because there are so few roads here it’s actually pretty difficult to get lost. Plus, most places you can see across the tundra and you usually know pretty much where you are.

There are a number of different maps of the area posted on the walls of the CNSC. My favourite is a false-colour satellite image that describes the area as “Canada’s Spaceport” and points out the various components of the old NASA rocket range. Assuming we (as a species) ever get off of this rock, I like to think that Churchill can once again be an active transport site for extraterrestrial activities.

Charismatic megafauna in Part III included a polar bear, a couple of caribou, arctic foxen, rumours of a wolf seen by a few of my companions, beluga whales, and a range of birds. My favourite birds up here are probably the Arctic Terns – I could watch them dive for fish all day.
Less charismatic fauna includes of course the mosquitoes. Apparently there something like 25 species of mosquitoes around Churchill that bite humans. Each species must surely have a large population size. 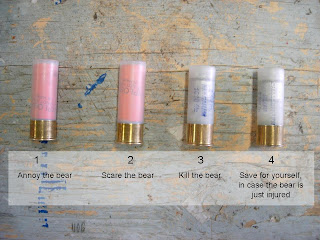 I carried a 12-gauge, pump-action, short-barrel shotgun most days we were out and about. This is the standard predator deterrent in Northern Canada, according to other people I talked with. The standard load of ammunition for this gun, at least at the CNSC, is two firecracker rounds and two slugs. A quick perusal of Wikipedia yielded no distinct article on firecracker rounds, and my earlier post about getting my Possession and Acquisition Licence showed up fourth on Google, after some links to a few sites about hunting and / or bear watching.

I think more explanation is necessary, based on the blank looks I get from people when I tell them about carrying a shotgun in Churchill. Firecracker rounds are odd little beasts. A firecracker round is a standard shotgun shell that carries a small amount of dynamite (or something similar, I’m not sure about the exact chemistry) as its projectile. When fired, the shotgun makes the usual loud noise / bright flash at the muzzle, and the little firecracker is ejected, to detonate some distance away. They’re pretty unpredictable, I’ve been told stories about individual rounds detonating at the muzzle, or 150 metres away, or not at all. We fired a couple for practice last year; they are clearly difficult to use, because they don’t generally fly in a straight line from the barrel. 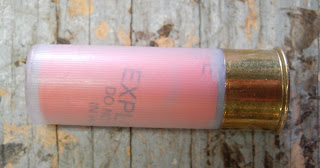 A firecracker round. It’s difficult to see in this photo, but the round actually has printed on it “Do not hold in hand”. How am I supposed to load, then?

A slug round for 12-gauge shotgun. The inside of the casing, which stays behind in the gun, is grooved to induce some rotation in the slug, much like the rifling on the inside of a rifle barrel. This improves accuracy when firing, though I have little direct experience.

Shotgun rounds of different types feel exactly the same when one is digging them from a pocket, except slug rounds weigh about twice as much each as a firecracker round. The magazine of the pump-action guns we were using is loaded last-round-first, so when one wishes to have a firing order of 2-firecracker-then-2-slugs, the slugs must be loaded first. A simple idea, but much more difficult when one is preoccupied by an approaching bear.

Last year my field season was one long visit to Churchill, so I cannot help but contrast this year with last. After only 12 days in the area, it seems like I’m leaving just as I got here. I know there are several other collecting sites I would have liked to visit, particularly since Twin Lakes, which was so barren for me last year, actually provided some nice specimens. On the other hand, last year I didn’t get across the river at all, while I had three days over on the West side this time around. The bear encounter was pretty special; I’m happy with that and how it turned out, a nice little shot of adrenaline and a fun story. Sorry again for the lack of pictures of that event.

It seems very unlikely that I’ll be returning to Churchill next year, or indeed any time in the next 2 or 3 years. This makes me a little sad, I had a good time here both this year and last year. But I do think I’ll visit again, sometime. 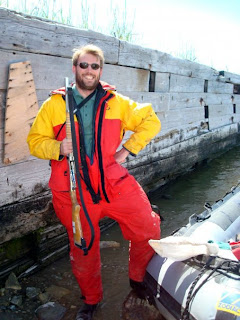