We got up remarkably early, enjoyed breakfast at Ben Evan’s with lots of coffee, and were southbound on I-75 by 7:30. Traffic was light until we approached Cincinnati, and realized we were in rush-hour traffic directed towards that city. So we bailed onto I-275, which forms a ring around Cincinnati, and listening to the radio we heard news of multiple accidents on the roads leading into Cincinnati, including in front of where we had been in I-75.

We crossed the Ohio river in Kentucky around 9:00am. This is of particular interest in the context of my study, as the Ohio river marks the approximate maximum southern extent of the Pleistocene glaciers. I realized once we were in Kentucky that I’d spent almost my entire life living in areas dominated by post-glacial geology. Almost everything about the terrain and landscape of southern Ontario, coastal British Columbia, central Alberta, and even most of the United Kingdom (where I lived for a few years as a child) has been strongly influenced by the kilometres-thick ice sheets that covered the land as recently as 12 000 years ago. Kentucky and other places I’m visiting this week and next were not covered by glaciers during the Pleistocene, and there are differences in the landscape, some obvious (Ohio is pretty flat, Kentucky has many more hills), some more subtle (Virginia’s mountain watersheds have apparently been stable in their drainage patterns for at least tens of millions of years). 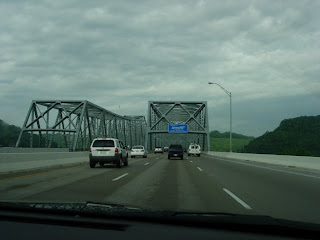 Crossing the Ohio river. The sign, though basically illegible in my photo, reads “Welcome to Kentucky”. 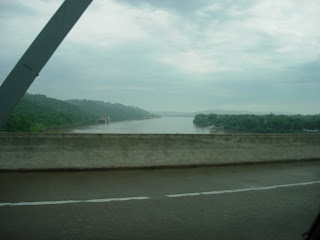 Taken from the bridge in the above photo. The Ohio river is reasonably large, as far as rivers of my acquaintance go. Notice the different terrain on the north (right, Ohio) and south (left, Kentucky) sides.

I also realized as we entered Kentucky that I have never before visited most of the states that are on this trip. I know I visited Florida at least twice as a child, which I have some memories of, but I have never before set foot in Ohio, Kentucky, Tennessee, Georgia, Alabama, Mississippi, Virginia, Maryland, West Virginia, Pennsylvania, or New York. So far, no real surprises, though.

We crossed the Mason-Dixon line and entered Tennessee after lunch. We’ve seen exactly one confederate flag so far (in the back window of a Nissan Pathfinder with Tennessee plates), but the only other indication that we are in “The South” has been the increase in the number of historic sites and state parks built around Civil War battlefields.

Tomorrow we start sampling. After a bit of searching, we found an excellent “road atlas” for Georgia that includes topographic information. We plan to visit two large lakes tomorrow, as well as at least two other sites that we expect to encounter somewhere along the secondary roads we’ll be travelling along.
Posted by TheBrummell at 6:45 pm
Labels: Summer 2008

Thumbs up re: all the bridge photos you're taking :)

We've crossed MANY bridges, large and small on this trip, and it's just day 3 of 17. Of course, we're paying attention to bridges because we're most interested in what's under them (i.e. freshwater invertebrates).

Have you designed / contributed to the design of any highway bridges, yet? When we're under one with our nets, I do think of the responsible engineers, especially when a heavy truck rumbles over at 60 mph.

Sorry no update tonight, I've got to sort out the photos.

Looks like fun. You should just swing down to Austin ... you're already half way here!

Looks as though your fieldwork is going better than mine! I just got back from the orchard -- the car died just before the Port Mann and I managed to pick up a cold. Be glad you're not in BC right now!

Keep up on the awesome entries!

...the car died just before the Port Mann...

Vehicle trouble is a constant worry. Our car is running very well, not surprising considering it's probably only about a year out of the factory. Some of the "roads" we've gone down to find accessible waterways have been worrisome, though. I don't know how much our 2008 Grand Prix weighs, but I don't want to find out by pushing it out of a sand-pit.

Strangely, though I have designed a bridge to the Highway Bridge Code standard, it is not on a highway. It's actually in a parking lot. Btw, I wouldn't recommend using the Newmarket GO Station parking lot ;-)

Doing structural inspections under bridges and culverts can be fun/interesting. Of course, when you're up to your armpits in muck and trying to sound the concrete with your hammer, the last thing you want to think about are the freshwater invertibrates that could get into your pants if your hipwaders spring a leak.

Matt would like your Highness Aardvark to design more bridges with decent hard shoulders beside them (both sides) and boat ramps.

And those inverts are harmless. Well, some are parasitic (leeches), but they're really not going to hurt any. Especially the amphipods - they're about the most innocuous critters going.

Sadly, I am not yet at the stage where I get to say if we put hard shoulders, boat ramps, etc. on the bridges. In fact, sometimes the senior engineers don't get a say either, as the landowner (municipality or MTO or something) will already know what they want. And I've never seen a boat ramp beside a bridge, strangely. Must be a USA thing. Or I'm just not paying attention.

We've only met one boat ramp right at a bridge, but several within 100 meters or so. I don't know how these are constructed, but it looks possible that the access road for the heavy equipment gets re-used to build the boat ramp and the local authorities put in a bit of a recreation area / parking lot (and maybe a couple of picnic tables - score!) around it.

Boat ramps look fairly simple, from an engineering perspective. Just a big flat ramp of pured concrete, but I don't know what has to be done to keep it stable, resist fluctuating water levels, sit on soft mud, etc.

To summarize: boat ramps are good things, second best are bridges not too tall over the water with broad, hard shoulders and clear paths down to the shore.