Today marks the southernmost extent of my travels this summer. In the early afternoon we reached 26° 50’ N, at the intersection of highways 78 and 27/25, in Glade County, Florida.

Before that, we sampled Lake Monroe, which was quite pleasant. We sat on the dock and pulled weeds from the shallow, muddy water, and watched the local birds scream at each other. 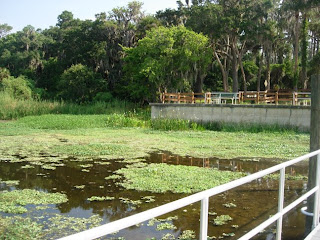 The shallow, muddy, reed-choked water of the northern shore of Lake Monroe.

Our next site has a name that Matt had particular trouble pronouncing, an irony considering his Ukranian too-many-ys last name. Our verbal difficulties were put to an end, however, when we met a crazy old man. He wasn’t obviously crazy at first glance, just a very friendly and politely curious old gent who lived near the shore of Tohopkaliga Lake, which he pronounced as “Lake Taho”. The crazy started to get rolling when I realized he wasn’t so much having a conversation with us as he was just randomly throwing out comments loosely collected into the category: “local alligator lore”. I would ask “How big do they get?”, and he’d reply “They come on down here from way out over there, by them far trees over on the other side, you see”. He told us delightful stories about an 8-year-old girl killed by an aligator four years ago (he was more clear on how long ago than on her exact age), “They never found the body”, and about the unfortunate police office knocked from his boat into the water and eaten, and about “them other fellas” who visited the area either yesterday or last week (the story changed a few times) who pulled many fish out of a nearby reed-bed. The final confirmation of his gentle dementia was his sneaky fast-drop when we weren’t looking – while we were getting the GPS coordinates and packing our stuff into the car, he dropped two magazines into the front passenger seat foot-well: People and Ladies Home Journal. We disposed of these at a nearby gas station. 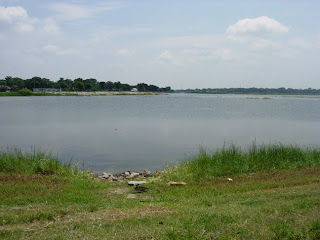 Moving south, we passed through a distincly rural and sparsely inhabited region. An advertised boat launch could not be found; we travelled a few miles down the indicated broad dirt road before deciding it was not going to appear. 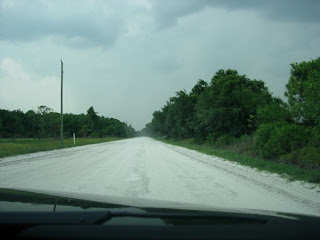 A broad, straight rural road in south central Florida, that seems to lead nowhere in particular.

Eventually, after a long, boring drive almost due south, we arrived in the vicinity of the second largest freshwater lake wholy enclosed by the contiguous United States: Lake Okeechobee. The recent and ongoing drought in the South-eastern U.S.A. had already been apparent to us, as we walked down to the very ends of boat ramps, and mucked about in the sand well below dying aquatic vegetation, but Okeechobee makes the effects blatantly obvious. We walked out onto the large pier-like observation platform, which must in wet (or perhaps even normal) years stand over water. Today, it stands over dry land covered by shrubs, small trees, and other terrestrial plants. The open water was barely visible on the horizon. 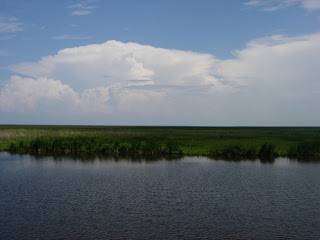 Lake Okeechobee. The band of water in the foreground is part of the lake, apparently there is a deep channel near some parts of the perimeter. The platform we’re standing on is itself standing on dry land. Notice the open water on the far horizon.

Fortunately for us, a canal surrounds the lake, and remains wet, though the water level is a little low. We found lovely amphipods and other critters in this canal, as well as some confusing marine shells – large, obviously marine snail shells litter the shores of the canal. I suspect the shells came from whatever quarry the US Army Corps of Engineers used to supply fill material for the dyke that stands between the canal and the apparent high-water level of the lake.

After collecting, we drove west along the lake shore to look for access to the lake proper. An access road leading to an observation point took us perhaps one kilometer closer, but at this point the open water appeared even further away. I have heard this lake refered to as the sea or the river of grass; this appears to be an apt name. On our way up the wooden boardwalk, I noticed something floating in the adjacent canal. I told Matt it looked like an alligator, he responded it looked like a log. We were both correct: ‘gators look like logs. A second one was lurking nearby, close to the sandy and rocky shore. 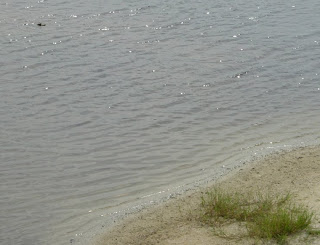 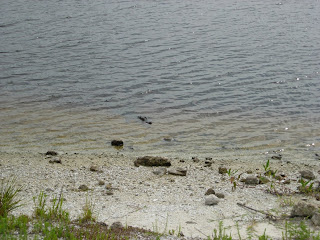 We had to drive all the way to Okeechobee to see ‘gators. Still, very cool, despite my semi-competent photography.

This summer I’ve got dangerous predators at both ends: Alligator mississippiensis at the South, Ursus maritimus at the North. One down, one to go.

We then proceeded to our southernmost point, a little ways to the West and a tiny bit to the South of where we saw the ‘gators. Then North, to a place named Lake Placid, where nobody I know was killed by any crocodilians. Amphipods here hang out in the floaty stuff.