As planned, while Christy et al. headed out for another day on the water, I walked out onto the tundra with David and Chen to collect non-marine critters. The ponds near the Tundra Buggy Pad, a sort of collection depot / parking lot for that corporation’s large machines, are quite rich in critters, and I was able to collect some fine specimens. David and Chen also got some good collecting in, in between describing their work to passing German tourists. I mostly avoided the public interaction, but Chen works at a museum and I suppose he’s used to such things. 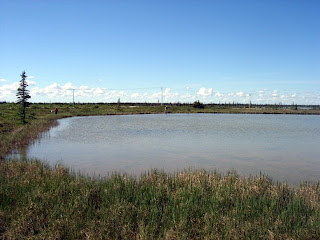 One of the nice things about working directly out of the station is the ability to return for meals. Lunch was much better than the sandwiches I would have otherwise prepared for a day on the water. The weather was lovely, so I can’t gloat about that being a factor in the relative distributions of myself and my companions. 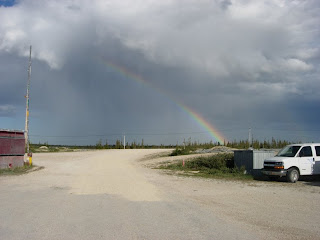 Early in the afternoon, rainclouds swept by the station to the East, and left behind this quite striking rainbow.

After dinner I took Chen and David out onto the river in the Zodiac of Adventure, because, er ...marine diptera… yeah just for fun. They’d not had a chance (or an excuse) to get out in the boat and see the belugas, so I took them out for a bit. The weather was so calm that the mosquitoes flew out and found us in the middle of the river, but we still had a great time. Chen and David took many, many photos, but I only took a few. 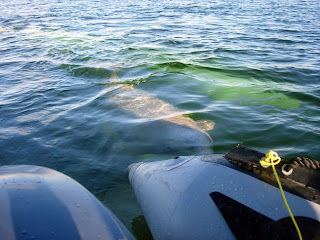 Two juvenile belugas appeared repeatedly at our boat, and bumped up against the pointy stern a couple of times. 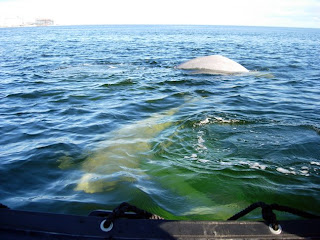 The pod of about 25 or so individuals departed and returned to us several times, often actually contacting the boat or spraying us when breathing.

Tomorrow will likely be our last real sampling day, as Friday will need to be devoted to packing gear and getting the Zodiac out of the water.