We stayed last night at the Quality Inn in Savannah, Georgia. This was closer to the coast (and the marine environment) than we had intended. Also, the motel was a bit harder to find and a bit more expensive than it might have otherwise been somewhere less touristy. The towns along Interstate-16 within about 50 miles of Savannah are remarkably devoid of motels, though.

An early start, then south and west on the broad coastal plain of southern Georgia. Collecting was a little less productive than yesterday, but a good (and very long) day nonetheless. At one very swampy little site, a backwater currently isolated from its creek in a region full of pine plantations, we found nothing to collect, and I almost stepped on a large snake. I think my words at the time were “Woa! Snake! That’s a BIG snake!”. Again, I’m apparently not one for momentous statements. 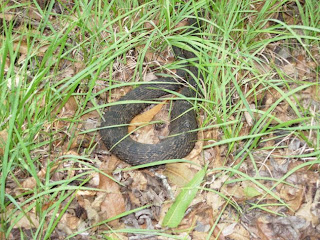 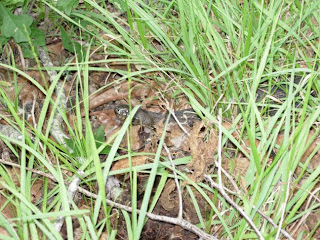 Snakey! No scale bar here, sorry, but this individual was about 5 cm in diameter at body midpoint, and the head was probably about 7 cm long. Does anybody know the species? Is this venomous?

One of our collecting sites was our first forray onto possibly-private property. A pond at a road corner yeilded a few beetles, but no amphipods. 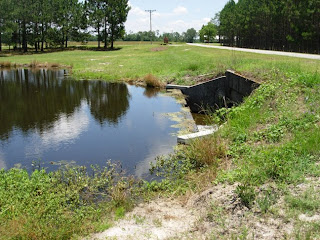 The pond at the corner of Walkerville Road and Highway 15 / 121, Georgia. Property owner: please forgive our little intrusion.

We finished the day in Valdota, only about 18 miles north of Florida, with an excellent steak dinner at Outback. Advisors take note: we’re paying for that meal out of pocket, don’t worry.

Tomorrow we’ll visit one or two last sites in Georgia, then into Florida.
Posted by TheBrummell at 8:45 pm
Labels: Field Work, Summer 2008

I had no idea that you were still blogging on the road. Keep up the posts, they're more interesting than most of my 'still struggling with grad. school' junk. How's the weather? All of a sudden, it's gotten intolerably hot here in Hamilton, and from what I remember when I was in Florida, it was pretty ridiculous there too.

Looks like a Cottonmouth. That is one to avoid stepping on!

I can blog when two conditions are met:
1. Decent internet access at the motel.
2. I'm not absolutely dog-tired after collecting all day and sorting after dinner for hours.

Weather: HOT. So hot and humid I've recalibrated my "it's too damn hot to move" scale. The threshold of activity used to be about 25 C, now it's closer to 35 C. I'm developing quite the tan on my arms and the back of my neck. I've probably also got a raccoon-mask tan going around my eyes, since I generally wear my sunglasses all day.

We've had a couple of thunderstorms, which tend to pass rather quickly, otherwise hot and sunny, all day long. Georgia and Florida in June are indeed very warm. I couldn't put a number on it, though, since the reports around here are in fantasy-numbers (Farhenheit) and I ignore their ravings.

Cottonmouth, eh? Yes, I suspected it was rather venomous. Thanks.