Today I visited Amituk Lake, about 40 kilometres North-East of Resolute Bay, via helicopter. This was my first ever ride in such an aircraft, and was more pleasant than I expected. 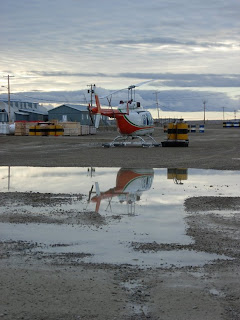 The weather was overcast, with a high enough ceiling to not limit our flight. Derek decided to stay in town today, so I was able to take his spot in the chopper. Debbie and I crowded into the back while Günter sat up front with the pilot. During the flight I had to periodically reposition some of our gear to keep it from sliding down onto my lap.

One of the most interesting aspects of the flight was way it revealed the total absence of any spatial references in the landscape. I had no way to determine either our speed or altitude during the 20-minute flight: the landscape is entirely fractal, and bordered by the unfocused grey of the sky merging with the blurred brown of the land at a seamless horizon. Rocks, hills, traces of floods and waterways, patches of snow and ice; all can be of any size at all, so as far as I could tell we might have been flying at near-orbital altitudes and at a thousand kilometres an hour, or at centimetres above the ground and at walking speeds. The only clue to the scale of my view was the occasional old ATV track we passed. 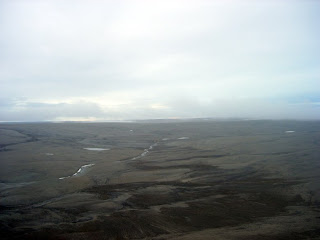 First, we flew by suborbital ballistic rocket over the continent of Asia. 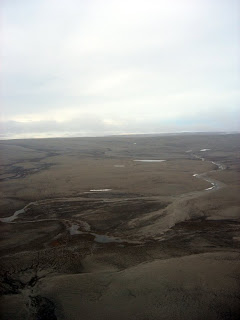 Later, we walked across a dry beach on a tiny island.

We landed near the North edge of Amituk lake, on a broad shoreline plateau near two streams flowing into the lake. After we quickly unloaded our gear, the helicopter pilot took off to transport another group of researchers, telling us just before lift-off that he’d be back in about 6 hours. Then we got to work. 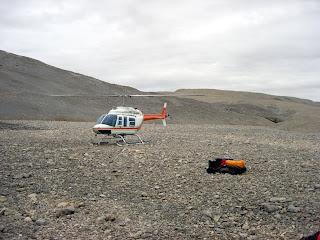 The helicopter just before it took off from Amituk. The lake was immediately behind me as I took this picture. The dark streak on the extreme left is a bend of one of the inflow streams.

Amituk Lake, like many lakes of the High Arctic, never thaws completely each year. There is permanently ice on the surface, even now in the middle of the warmest summer on record. However, rather than forming the expected (by me, at least) pad of solid ice drifting around the middle of the lake, the remaining summer ice here forms intricate shapes as water melts between small blocks. The resulting matrix of ice and cold water is named “candle ice” because it tends to form spindle shapes hanging vertically in the water. The entire mass gets pushed around by the wind, and builds up close to the leeward shore. Waves on the lake’s surface push these ice spindles into each other, producing a music-like tinkling-crashing sound like broken glass. Multiply this over the hundreds or thousands of square metres of lake surface covered by this ice, and Amituk is a surprisingly noisy place. 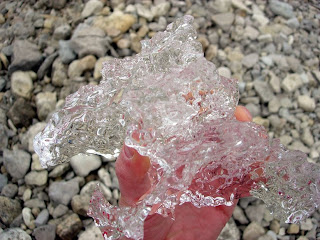 This odd-shaped ice lump was floating near the upwind edge of the candle ice patch. I found the shape and the way it played with light fascinating, and took many pictures. None of them really capture just how odd-looking is this material. I think it might have something to do with the loss of 3D in a photo taken through a single lens. 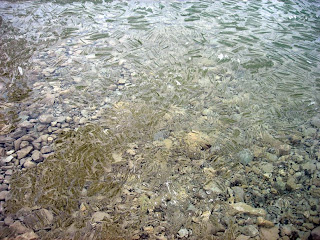 Candle ice on Amituk Lake. Spindles about 15 cm long hang vertically in the water, an unstable position. There is a slow loss of spindles from the edge of the pack, as individual spindles are pushed by waves out of position and collapse to the more stable orientation of lying horizontally on the surface (many such fallen spindles are visible at the top of this image). Blocks of ice drifting into the pack will dislodge one or two spindles, or become stuck and incorporated into the pack.

Günter and I spent some time on the lake’s surface, in our tiny Zodiac. We needed to collect water and plankton samples, so we put the little electric motor to use and buzzed around. On the middle of the lake, the only sound is the rushing wind and the distant crashing of the candle ice. 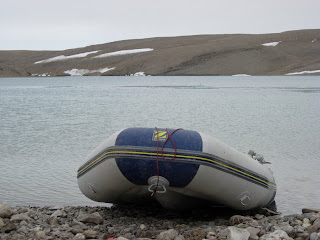 Our tiny Zodiac on the shore of Amituk Lake.

We got everything we needed to get done, done, so I decided to try to reach some of the ponds up on the surrounding plateau that we’d seen from the helicopter. The only work we had left was to pull in the net, which we wouldn’t do before it had been out fishing for us for at least 4 hours. Günter had a pair of little short-range radios, so I took one and he promised to monitor the other, and off I went.

Once again, the total lack of spatial visual reference around here got me. From the shore, or even from the middle of Amituk Lake, the surrounding plateau appears to be an easy hike away, perhaps 50 or 60 metres above the lake’s surface. The land forms stepped slopes, however, which I discovered as an annoying phenomenon of constantly being unpleasantly surprised to find myself not at the ridge-top as I thought. Every time I climbed up to the apparent horizon, I found myself on a bench with another ridge rising before me.

I walked for about an hour, never finding myself really on top of a local peak or ridgeline. For a time, I climbed a sloping ridgeline, reaching each of a series of large boulders on the ridgeline in turn, thinking each boulder represented the local peak. Günter called on the radio, and said he and Debbie were on their way up, and where was I? Good question, without landmarks I had trouble describing to them how to find me. I could see the lake, however, and they couldn’t, so I knew approximately which direction they would be relative to me, plus I knew they’d climbed up roughly the same route as I had. Rendezvous was not difficult; once in visual range our bright-orange floater suits proved useful again. 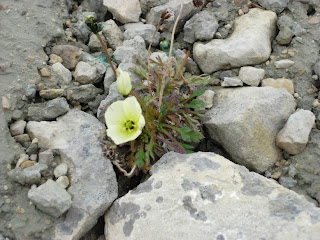 An Arctic poppy, one of the few plants I found growing on the polar desert around Amituk Lake. 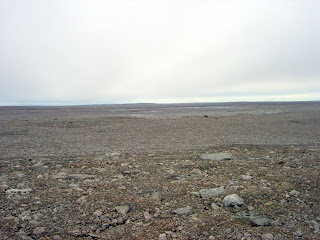 A shot of the scenery, such as it is, on the polar desert plateau near Amituk Lake. 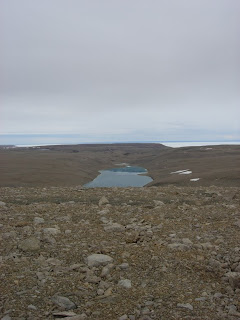 Amituk Lake, viewed from due West and above. I was standing on a gently sloping ridgeline that runs parallel to the near shore of the lake. The lake itself is shaped like the letter L, with only the short arm visible in this shot. The darker blue at the far end of the lake is a patch of candle ice, near the outflow river.

After our little walk, during which we found no ponds (that distance thing, again), we hung out near our all-packed-up gear, waiting for the helicopter. I found a few critters in some seep water on our way back down to the lake, but really there is almost nothing at all alive around here. Waiting for a helicopter is an acutely boring activity – there is quite literally nothing at all one can do to speed the return of the aircraft.

Six hours past our drop-off time was 3:30pm. This time came and went, without much in the way of surprise by any of us – the helicopter had many other tasks to accomplish that day, so obviously it could be late.

At 5:00, Günter asked me if I thought we should phone Polar Shelf with our satellite phone to ask them if they’d forgotten about us. I said we should probably wait until 5:30, since that would be an even 2 hours after our expected pick-up time.

About 10 minutes later, I said “At least it’s not raining”, to which the universe immediately replied with rain. Literally, one second after I said that, a drop of rain fell on my face. D’oh! Günter decided this was enough impetus to justify a phone call, and dialled PCSP. An Iridium sat. phone looks like an oversize cell phone, with a thick antenna. Polar Shelf informed us the helicopter was already on its way, and that we’d probably not miss dinner, so not to worry.

They asked us about the weather. This innocuous statement hides an important distinction between the staff and the researchers at Resolute. The staff are, above all, airport workers. They think like pilots when they think about the weather, and they spend a lot of time thinking about the weather. To a researcher (I won’t say “normal person”; researchers are generally anything but that), the weather is cloudy or clear, rainy or windy or cold. To a pilot, the weather is critical, full of life-or-death details: wind speed, visibility, ceiling height, and a host of other factors that determine the ability of a helicopter to land and take off. We guessed and told them that visibility was 10 miles (particularly meaningless for metric-embedded Günter), and that the rain was “not heavy at all”.

As soon as Günter hung up the phone, we heard the chopper’s approach. Once again, within one second of somebody saying something, that something happened.

The helicopter landed, we happily greeted the pilot, loaded up, and returned to Resolute. I was quite impressed by the skill of our pilot – he set us down in EXACTLY the same place as we’d been on take-off, 8 hours previously; the skids literally settled into the 5mm-deep depressions they’d made sitting there before.

Tomorrow is pack-up day for Günter and Derek, and Debbie is going to Melville island sometime in the next few days with a large group of German researchers (physical geology, from what I can gather). Thus, I’ll probably spend tomorrow within sight of the PCSP facilities, collecting what I can from the numerous ponds around the station.

Wow, what a surreal-looking place. Are you actually finding samples or are you just going to be bringing back water?

There were a few samples, mostly chironomids (non-biting midges) and a handful of collembolans ("spring-tails"; insect-like animals that typically live in soil or decaying plant matter).

"Surreal" describes it well, actually. It's a cold desert, and Cornwallis Island is basically just 7000 square kilometres of gravel-pile.

from sky to ocean you have a great experience.