Today was one of the possible days for me to fly from Truelove back to Resolute. A few days ago I spoke by radio with Tim and Mike, the managers of the PCSP in Resolute, about my hopes and plans regarding air travel*. The upshot of that conversation was that I should be able to fly to Resolute on either the 31st, the 1st, or the 2nd. Today, I did not fly. 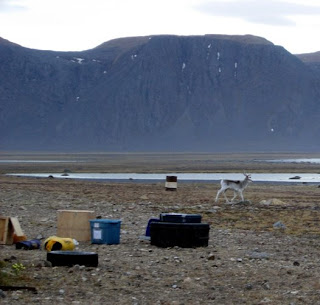 A Perry Caribou that came by our camp and checked us out. He (?) sniffed around the gear we’d left at the end of the runway for a bit, then took off in the general direction of the transect. Apparently, Perry Caribou are pretty rare, and are not often encountered on Devon Island, especially.

Inclement weather yesterday in other places prevented the Belcher Glacier research team from relocating their lower camp and moving people and equipment around. It seems that we were pretty much the only research group in the Arctic Archipelago to experience decent weather yesterday; by the reports we heard, everywhere else from Ellesmere to Northern Baffin and from Foxe Basin to Banks Island had craptacular conditions that grounded almost all flights. This bumped the flight schedules run out of Resolute by a day, so whoever else needed the helicopter and a Twin Otter yesterday is using them today. This is one of the many reasons why I have a great deal of respect for Mike, Tim, and everybody else at the PCSP, who seem to spend a large portion of their time re-arranging schedules at the last possible minute in response to factors utterly beyond their control.

So, I tried to make myself useful around here. Everyone else here besides Steve is scheduled to fly back to Resolute August 9, so the weird weather in other places has little effect on them – yesterdays no-fly conditions will have little impact on schedules more than a week later. Thus, most of my companions were hard at work on their research today, and welcomed another pair of hands. 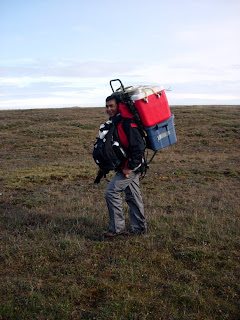 Here’s a picture of Asim, carrying large and bulky gear for his transect. Those containers are mostly full of empty sample bottles; he’s going to be taking samples of the soil and a few other measures at each point along the transect. I didn’t carry quite that much.

I spent most of the day on the transect with Asim, helping to set up some smaller experiments, moving gear around, and just generally trying to help out. At one point, Asim and I were near the far end of the transect and the caribou we saw earlier showed up. At least, we think it was the same one. He (?) seemed fairly unafraid of us, and moseyed around eating lichens and moss for a bit. Then, for no apparent reason, the caribou took off at full speed at an angle away from us, skirting around the Western edge of a large pond just North of the transect.

Asim and I thought he might have spotted something scary, like perhaps a polar bear, so I grabbed the shotgun I had lying atop my backpack, a handful of shells, and my binoculars and walked up onto the nearest raised beach crest to look. It was actually Asim’s suggestion I take the gun; foolishly I thought I’d go see without it. I saw no bear, but Asim’s advice was still welcome, since had I seen a bear, I would have sincerely wished to have the gun with me. In this case, I think we’re just dealing with an eccentric caribou.

Tomorrow looks like a more likely day for me to fly. Steve got most of the story from Tim and Mike this evening during radio check-in (pronounced “skid”), it seems the Belcher Glacier folks will be flying back to Resolute tomorrow and we should be able to hitch a ride. In the event that only one person can be transported, I am unlikely to travel because Steve will get priority. Oh well, from what I’ve seen I think they’ll be able to fit me in behind a seat or something.

* Discussing anything via radio is a rather surreal and tedious process. One must remember to say "over" after each transmission, and avoid a long list of words that are particularly easy to mis-hear through the static and poor signal-to-noise ratio of long-distance radio communication.