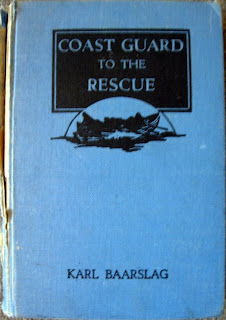 I was looking for a way to kill 10-minute blocks of time after meals and before fieldwork bouts each day, and the Churchill Northern Studies Centre (CNSC) maintains a small “reading room” across the hall from the cafeteria. Most of the books on the shelves deal with various aspects of the North, such as wilderness survival manuals, biographies of Arctic explorers, or descriptions of legal proceedings and legislation of particular relevance to northern Canada. At first glance, this book appears to have little to do with Churchill, Manitoba, as it is about the history and exploits of the United States Coast Guard, an organization with little presence here.

This book fit my desires perfectly – it’s a series of chapters further subdivided into vignettes each of about 2 or 3 pages. After breakfast the other day, for example, I read two of these vignettes while some of my colleagues washed dishes, before heading out to the intertidal to collect marine invertebrates.

I did not realize the age of the book when I first started reading it. I didn’t check the copyright date until I first read a passage about the “recent” sinking of the Titanic. Later references to “the World War” and the very recent repeal of Prohibition confirmed this book had not been edited since 1937. Not only did I find a book full of interesting little anecdotes to read while drinking a cup of coffee, I also found a book that acts as a window into the past of 70 years ago.

Once I’d realized how old this book is, the reading became that much more enjoyable, as references to the difficulties involved in some rescue operations take on new meaning when these events are taking place before the advent of maritime radar, or universal voice-radio on all ships and boats. The cutting edge of marine lifesaving technology in 1936 was the flying lifeboats operated in modest numbers by the U.S.G.C. The author describes with glowing pride the fleet and typical operations of these aircraft, including sections on how amazing and impressive it is to be able to transport an injured person from a ship off the coast to a hospital in merely 6 to 12 hours. Much of that time is consumed preparing for the flight from a shore base, taking off, and landing near a ship at sea. While modern helicopters may not actually be any faster during level flight than those old flying boats, my understanding is that a great many improvements have been made in reducing the readiness time of rescue operations. Prior to the development of lifesaving marine aviation, of course, there was simply no hope for a critically injured person aboard a ship at sea that lacked full medical facilities.

Other unintentional historical notes I pulled from the book included pre-World War II attitudes towards women. At several places in the book, the presence of a woman on board a stricken ship is used to render a situation even more gripping and desperate, with participants in a rescue of the 1880’s on the Great Lakes reacting with great consternation at the news of a grounded ship’s cook’s gender. The occasional reference to public attitudes and politics of the Prohibition era was also very interesting; I hadn’t realized how divisive in American politics that constitutional amendment had been. The author presents in oblique ways a hint that rather than being a case of temporary majority opinion, the enactment of Prohibition in the U.S.A. was more widely viewed as a temporary and surprising gain of political power by “dry fanatics” in control of the legislative branch of government. I’m sure there are parallels with current American political events.

The other nice thing about this book is its length – I finished it on my last full day in Churchill, having read it for perhaps 25 minutes in total each day on average, spread out into 3 or 4 short blocks of reading and caffeinating.
Posted by TheBrummell at 11:40 am
Labels: History, Reviews, Summer 2008

Reading old books like that is always an interesting venture. Sometimes you score an awesome title full of interesting anecdotes, while other times you find yourself struggling to get through a few pages.

I often find it difficult to read 'old books' simply because I dislike the writing style. As someone who's used to reading scientific literature (always precise and to-the-point), it's enough of a struggle to read some modern works of non-fiction. Going back more than 60 odd years, I often find myself falling asleep at the flowery-dialog/unnecessary length of these types of books. I was actually planning on ordering a book about one of the first scientific expeditions to Antarctica, written shortly after the expedition itself in the early 20th century. However, after considering its length (damn near 700 pages of small print) and reading a few excerpts, I decided not too. I realize that this is a personal failing of mine, but... meh.

Yeah, I lucked out on this one. There was a little of that flowery-dialogue, but because the format of the book was chopped up into a series of short anecdotes, the author never really had the chance to wander aimlessly through the literary meadow (to stretch the metaphor).