I have been rather busy lately; I may have mentioned this before. Most of what I've been doing has been directly or indirectly relevant to planning my summer, which will really get rolling in just over a week. In brief, I'll be driving all over the place, collecting aquatic invertebrate animals, to be brought back to the lab for later analysis and measurements of genome size (and possibly other phenotypes).

The planning has reached the final stage. I now have a pretty good idea of what I'll be doing at the level of knowing what equipment I'll need to do it, and I know with some precision where I'll be at key times - I have airline tickets, for example. The basic idea is to collect animals from a broad range of climates, to look at correlations (if any) between climate variation* and phenotypic evolution. The data I'll be collecting (and presumably publishing) includes detailed location records (latitude and longitude, and such things as Hydrologic Unit Code and local vegetation) for each population I sample, species identifications (provided by a combination of experts and molecular comparisons) and genome size measured by either flow cytometry or Feulgen image analysis densitometry (or both).

* Climate variation in space, not (necessarily) in time. I work on climate, not on climate change. But if you're a funding agency, feel free to ignore this distinction and supply my sexy research with money.

I still have a few things to sort out - faxes need to be sent to field stations, suppliers of key materials need to be contacted, and some certifications need to be finalized. This is not to say these things are unimportant - indeed, they are critical to my field work, but I do not anticipate great problems, or long times to solve them. I had a meeting yesterday with my advisor and my travelling partner, a PhD student at the University of Waterloo, with his advisor (his advisor is also on my committee... it's a tight little group, I suppose). I haven't asked my travelling partner for permission to discuss him on this blog, so I'll just leave that for now. He and I will be working together only for the first part of my summer work, I'll be working with a range of other people later. 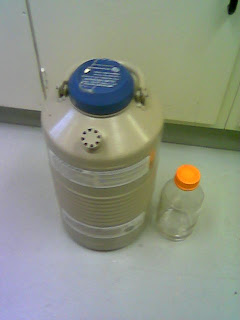 The basic idea is to drive along a roughly-planned route, stopping several times each day to sweep a net through a pond, stream, lake, swamp, et cetera. Some sites will be planned before I go (I have a short list of some key places to visit already), some will be planned on the day of (e.g. "let's go to that park this afternoon"), and some will be haphazardously encountered while driving; we'll just pull over at the side of the road with our nets. Each evening, at motels, I'll sort the live animals I've got, by an algorithm I haven't finalized yet but that will include sample site, body size, and probably some measure of the specimen's direct importance to me (i.e. taxonomic affinity - I care more about amphipods, diving beetles, and snails than about other things). Sorted animals will go into cryovials and into a cryoshipper at -196°C.

We're leaving southern Ontario Monday morning, June 9, and ideally we'll just drive all day and sleep somewhere in Kentucky. Then we'll drive to northern Georgia, and begin sampling. This trip is just drive-and-collect, without any breaks, travelling through Georgia, Florida, Alabama, a little bit of Mississippi, Tennessee, Kentucky, Virginia, Pennsylvania, and New York, returning to Ontario on June 25. We should be able to cover about 300 km per day, over 16 days, for a total distance of something like 5000 km. Our rental car has a 4000 km limit, so we'll be incurring some additional costs there, but the rental agency knows this and it's not like we'll be hit with punitive charges. They did advise us to stop for an oil change if we do go over 5000 km, especially since significant parts of this trip will include driving on dirt roads.

My partner for the trip through the south-eastern USA will not be travelling north with me. He's mostly interested in populations of amphipods in ponds and lakes in the vicinity of Chattahoochee, Florida, and has no reason to venture into mosquito-land they way I will. I'll be travelling from Guelph on either the 26th or 27th of June (depending on the schedules of the other people on this trip), going to Thompson, Manitoba. This part of my summer is in co-operation with the fine people of the Biodiversity Institute of Ontario; they have an RV that's going to be doing its own giant summer of collecting, which I'll be accompanying for a couple of weeks. Again, I haven't asked permission to talk about any of my travelling companions here, so I won't. We'll be travelling approximately along the northern shores of the western Great Lakes, Huron and Superior, and on into Manitoba, before turning north for the lakelands of central Manitoba and Thompson. I've got a train ticket to leave Thompson for Churchill on July 7, so that has determined our schedule. It's about 3000 km from Guelph to Thompson by the most direct all-Canadian route*, but we'll be detouring and stopping a fair bit, on average stopping about once each day, with more collecting at campgrounds and the like each evening.

* The terrain south of the Great Lakes is considerably less rugged and more passable than the northern hinterlands, but that would defeat the purpose of our trip, as pleasant as Minnesota may be.

Unlike the previous two segments, this part of my summer will not be drive-and-grab, rather I'll spend almost two weeks at the Churchill Northern Studies Centre (where I spent four weeks last summer), taking day trips in the neighborhood to collect critters, including marine animals from Hudson Bay. The basic protocol back-at-the-motel (in this case, the field station's laboratory) remains the same, but I'll be able to leave my cryoshipper sitting in some quiet place (like the inside of a large freezer) instead of carrying it around all the time.

The High Arctic. I'm travelling alone to get to Resolute, but both common sense and government (including university administration) regulations both forbid working alone, especially in such places. I've arranged to work with another research team who will be in Resolute at the same time as myself; they will be hiring local guides / assistants (it's good to have someone around who understands ice), and their work has similar requirements in terms of when-to-be-where as my own. I'll be collecting as before, but with much more marine collecting since there really isn't much on land or in the lakes and ponds at this latitude. We plan to visit Devon Island, too; this depends rather heavily on local weather conditions, but we should get at least one decent day to fly over.

The final part of my summer field work is the least well-planned. My advisor and I have decided to wait and see what the outcomes of the earlier segments are before spending more money on plane tickets and accomodation and so forth. Basically, if things go well in June and July, we'll have ample time to make arrangements in New Brunswick for mid-August. Having said that caveat, the plan is for me to fly to New Brunswick, and spend about a week at the Huntsman Marine Science Centre, collecting marine invertebrates for comparison with those I'd have already collected at Churchill and Resolute (and perhaps a couple of intertidal critters nabbed during a short break somewhere in Florida).


So, I have a long but very exciting summer ahead of me. I'm very much looking forward to all the fun places I'll be visiting, at multiple spatial scales: yes, I'm a geek and I think that way, I'm looking forward both to visiting interesting places like Florida and the Arctic, and I'm looking forward to wading through shallow ponds in very different ecosystems. I've got predators to worry about at both ends of the trip - alligators in the south, polar bears in the north, and of course the probably much greater risk associated with driving 8000 kilometers.

I should have internet access throughout the majority of the trip, and I plan to blog about it as I'm doing it. If you're going to be in any of these places at the same time as me, drop me a line in the comments or by email (martinbrummell at msn dot com).
Posted by TheBrummell at 4:45 pm
Labels: Field Work, Summer 2008

"But if you're a funding agency, feel free to ignore this distinction and supply my sexy research with money."

Hmm, I think you'll have to try a little harder than that to get money. Made me laugh though.

Hmm, I think you'll have to try a little harder than that to get money.

Grant writing (also known as formalized scientific begging) is death. It's about the worst part of being a scientist, as far as I can tell from the complaints I hear from faculty. The little applications (scholarships, essentially) that I've applied for have been huge amounts of effort for no guarantee of any reward.

Glad I could make you laugh.

Option 1) Grants
Lots of work, good chance of no reward.

Unfortunately, unless you're independently wealthy (which I seriously doubt, based on what I know about you), I think you'll be writing grant proposals for a while.

Sometimes you just have to laugh to keep from crying.

(Man, it's nice to have a real job and have actual money in my bank account. Mwahahahaha!)

1. Good luck with the work, I hope things work out and that you have fun while traveling. Make a concerted effort to blog (even if it is only micro-blogging) - it may be your only contact with the 'inside' world!

I don't so much dislike writing grant applications though they are tedious. However, it pisses me off a bit that, despite the collective intelligence of all of the people working in technical fields, we're still judging grants based on a lot of 'bullshit', and actively encourage dishonesty. Why isn't it enough for me to say exactly how my work will benefit my field? Why do I have to make up potential medical applications? Why do I have to pad my CV to make it look as though I'm some kind of humanitarian? Stuff like that bugs me. There was a recent op-ed in Nature where someone suggested reforms to the way that grants are written such that some of these issues would be mitigated.

There was a recent op-ed in Nature where someone suggested reforms to the way that grants are written such that some of these issues would be mitigated.

I'll have to find that. I usually get the table-of-contents for Nature emailed to me, but I guess I've missed one or two issues lately.

Man, it's nice to have a real job and have actual money in my bank account. Mwahahahaha!

I'd swear revenge upon you, but the ethics committee applications for giant orbital laser platforms and aardvark-targetted bioweapons are even worse than the grant applications I'd need to get the funding for the giant lasers and bioweapons.

What an awesome summer! I know you'll kick ass at collecting and have an absolute blast. I expect to see lots of pictures and hear some amazing stories.

Come back in one piece!