Today we visited a small creek / boat launch site very close to the Florida border, where we found some interesting critters but no amphipods. We saw a large owl in a tree overhanging the creek, and Matt got close enough to snap some good pictures. 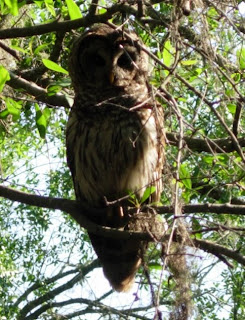 This guy seemed unconcerned by our activities. We got wtihin about 10 meters.

We then crossed into Florida via some very back roads, after trying to visit a site that turned out to be reserved for US military personnel. In Florida, we checked out a couple of sites that turned out to have little for us, including an urban patch of low ground and swamp that we carefully waited for the abundant police to go away before visiting with our conspicuous nets.

Much driving later, we discovered a few inaccessible boat ramps, including one that is apparently for the use of residents of a newly-constructed gated community. The nearest house to it was having a sweet-sixteen party that we decided not to interrupt.

Frustrated by northern Florida’s elitist and cavalier atitude towards amphipod habitat, we tried one last boat ramp on a lake in the area. We turned off the highway, onto progressively worse roads, until we finally bumped along a hard-packed sand track to a beautiful and utterly deserted boat ramp and beach area on Palestine Lake. This was probably our best sampling site to date, with not only abundant amphipods, but many other critters, including one large and rather foolish dytiscid beetle that tried to hide under Matt’s boot. My command “Don’t move!” upon sighting this beetle generated some unfortunate gator-related alarm in Matt, but all was well. 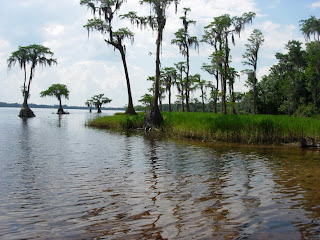 Palestine Lake. The good collecting was in among the roots of the tall grasses growing out of the shallow water.

We continued East, and found a motel outside Jacksonville.

Tomorrow we need to get further south, and find some decent sampling locations on the Florida peninsula.
Posted by TheBrummell at 8:30 pm
Labels: Field Work, Summer 2008

I'm glad that you're finding the amphipods that you're looking for. Based on previous studies, are you expecting to see more of them in say lakes as opposed to streams and rivers? I assume that small critters are everywhere but I don't know enough about the organisms to know if they live in specific conditions. Oh, and I guess none of the American authorities has accosted you about all those scary collecting containers you've got in the back?

We were expecting amphipods to be pretty much everywhere with decent vegetation: they use aquatic plants as both food and shelter (from predators). However, we've had the most luck with amphipods in slow-moving or still waters, especially shallow areas at lake edges, and protected areas on shallow streams. Larger rivers have been almost entirely unproductive; we do not yet know why this is so.

Presumably, there are amphipods present in almost every body of water - they're famously good at dispersal and colonization. However, the amphipods at some sites would require more effort (and probably equipment) than we are prepared to expend to collect.

Crossing the border on the first day, we expected to spend some time explaining why, exactly, we were travelling with four prominent white/grey cylinders in the back seat, which release "smoke" (water vapour) when the lids are lifted. However, they didn't care at all, and didn't even ask about them.

Today we had our first encounter with local law enforcement. I'll save that for the full post, but suffice to say here it went well, and was brief.

Matt forgot a half-full bottle of ethanol in a motel room a few days ago; when we went back to get it, he told the cleaning staff who had picked it up it was a water bottle.