On Being a Zoological Generalist

Unlike most of my colleagues and scientific peers, I am not a specialist. Most of the biologists I know or have met work on one well-defined group of organisms. They study a single species in great detail – genetics, development, behaviour, or some other aspect of biology. Or they study a group, typically something like the taxonomic level Family, in somewhat less detail – evolutionary adaptation, phylogeography, comparative physiology, ecology, or something else. Taxonomists, in particular, tend to focus on a single family, and specialize in the species in that family and their closest relatives. For example, in the last year I have met two specialists in Chironomidae (midges – small, harmless flies with aquatic larvae), one specialist in Dytiscidae (predaceous diving beetles), a grad student training to specialize in Muscidae (house flies), a person who uses Amphipoda (an order of crustaceans) as a model to study freshwater biology, and several people who study some aspect of one species. During my M.Sc., I was also this type of specialist: I studied in some detail a single species (guppies – Poecilia reticulata) and compared it to a small number of other species (genus Xiphophorus).

Now, however, I am a generalist (at least, that’s what I consider myself - others’ opinions may differ). When people ask me what I work on, I say “genome evolution and climate” or something similar, often depending on the audience. Choosing what, exactly, to say in a given situation for a given (guess about an) audience is a complex subject for another time. For most other biologists, I say “evolutionary biology – I work on genome size” then I say something about climate. I am NOT a climatologist, and strive to avoid giving that false impression.

Responses such as this seem not to head off the usual follow-up questions. I suppose it’s both flattering and quite normal for other people to be interested in my work. Since most other biologists are, as I defined the term above, specialists to some degree, they expect an answer that encompases some clear group of organisms. My answer of “invertebrates” usually does little to clear any confusion generated by my, er, “conversation style” up to this point. When I explain that I work on genome size evolution, as a phenotypic trait that changes in populations over time (just like any other phenotypic trait), this helps to some degree, but lingering questions about what “invertebrates” means tend to linger.

Many people are aware that the term “invertebrates” is paraphyletic, even if they don’t use that word. Like “fish” and “reptile”, the collection of organisms falling under the label “invertebrate” includes some animals that are not each other’s closest relatives, and excludes some animals that would be included in any classification that properly accounts for evolutionary history. Confused? OK, we say that spiders, snails, and sea urchins are all invertebrates, but salmon and sparrows are not (they’re vertebrates). However, sea urchins are actually more closely related to salmon and sparrows than they are to either spiders or snails.

Also, the species-level diversity encompassed among invertebrates is truly vast. No person has yet made the trivial mistake of taking me completely seriously when I say I work on all invertebrates. This is probably a large source of confusion. Anyway, what I mean when I emphasize this large paraphyletic grouping is that I’m not restricted to any one manageable group – I’m not a specialist (to bring this posting around in wobbly circles). So I next talk about the focus groups my PhD will include. Because the diversity of invertebrates is so unmanageably large, I am working most intensively on four groups, three families and one order (link – localness of taxonomy).

Because Dr. Jonathan Witt of the University of Waterloo is on my advisory committee, and (more importantly) I met him this summer and we get along well, I will be using these little crustaceans to deepen my study of genome size variation across climate regions. I’ll be examining amphipod genome sizes from every site I visit for fieldwork. 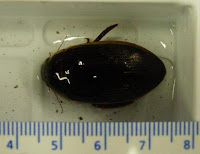 Dytiscidae: I chose this group, like the amphipods, because I met a specialist. Dr. Robert Roughley of the University of Manitoba is not on my advisory committee, but has already been a great help to me – I met him in Churchill, and we’ve been in touch by email; he has cheerfully agreed to identify some specimens I’ve collected both from around Churchill and from around Guelph. I’ll be specifically looking for dytiscids throughout my PhD work, though my planned trip* up the eastern part of the USA will be more focused on the amphipods.

This is the most obscure group I’ll be working on. Even most people with extensive experience teaching undergraduate invertebrate zoology courses tend to hesitate when I use this word. They’re important in soils, especially in the Arctic – most other soil animals seem to disappear above the permafrost line.

Lymnaeidae: The pond snails are an interesting group to a large number of specialists I would probably have almost no contact with, otherwise: parasitologists. Lymnaeids are intermediate hosts for a number of parasites of humans and livestock, including the nasty little trematode that causes Fasciolitis. Similar to the enchytraeids, the lymnaeids are relatively diverse and common in Arctic regions.

Then I encounter more confusion, after describing those four groups. I’d like to take this opportunity to state, categorically, that these are groups of particular, not exclusive, interest. I’m also, for example, very interested in measuring the genome sizes of other invertebrates (there’s that term again) such as sea urchins, spiders, snails beyond the lymnaeids, and so on and on and on.

Where was I? This was supposed to be a post about my PhD and what it means I call myself. I guess I’ve accomplished this, and hopefully cleared at least as much confusion as I’ve generated (excepting the Enchytraeidae, they’re just really hard to learn about).

Hmm... Very difficult classification conundrums have you posed, yes? It's weird because I sorta see an interesting distinction in you use of the terms 'specialist' and 'generalist' (though I agree with your assessment). My primary research focus is the Drosophila melanogaster subgroup, however, I study a wide variety of loosely-related elements pertaining to this group (I also finished a study in nematodes, so I'm not totally specialist). You on the other hand look at something arguably fairly specific in a wide variety of organisms.

So in terms of species, I see the distinction between generalist and specialist. However, there aren't many lab that look at a wide variety of aspects of many different species (or that can afford to!).

You make a good point. It's true I look at basically one phenotype in a large number of species across a very broad taxonomic range. You are certainly not alone among biologists who study a number of distinct aspects of a small number of species.

My use of the terms "generalist" and "specialist" refer only to taxonomic diversity at higher levels (Order and higher), not to anything else. And I hope I didn't imply any inequality of quantity or quality of work - I generally assume a year's work or some other standardizable metric like a PhD is pretty equivalent across study subjects.