This weekend, I successfully completed the Canadian Firearms Safety course and passed the Federally-mandated tests at the end. Hurray for me! Anyway, I spent much of the weekend thinking about guns, and I thought I'd blog about it.

The course itself basically took all day Saturday to complete. We (myself, most of my lab, a few others) went to a training centre near Kitchener. The people who run this training, Nancy and Don, were suggested to me by an experienced hunter and firearms-instructor who isn't technically related to me but could be considered part of the family under some circumstances. The odd details of my relations will have to wait for another post. Nancy did most of the training, and Don administered the practical test. The course training was surprisingly information-dense; despite what felt like a slow start, I learned a great deal between 9:00am and 6:00pm on Saturday. We went through the textbook (Fig. 1) in a somewhat disjointed but well-done fashion, and had a chance to practice the safe handling of some firearms. 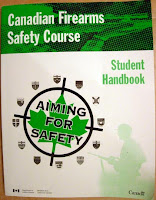 Figure 1. The course book for the basic, non-restricted firearms course. About 120 pages, with plenty of illustrations of happy people holding guns.

The course and the license I'll eventually get is for firearms that are non-restricted in Canada. Yes, Yanquis, in other civilized countries the State has a strong and direct influence on guns and their availability. Non-restricted firearms in Canada are basically rifles and shotguns - hunting guns, for the most part. Restricted firearms are mostly pistols; prohibited guns are anything else that "we" (Canadian citizens via our democracy) have decided should not be available to most people; this includes most guns that do not have apparent functions beyond military or criminal use, such as sawed-off shotguns, as well as some forms of ammuntion (e.g. incendiary).

There were two tests at the end of the course, on Sunday. The first was a pretty straightforward True/False and multiple-choice test that one had to score at least 80% on to pass - I scored 98%. The one question I got wrong was one asking about carry positions; I didn't respond to any questions with the unsafe choice, so I'm not worried that I misidentified a little drawing of a person as a "cradle carry" rather than as a "trail carry". The practical course was more stressful - unlike on the written test, it's possible to instantly fail the practical - all you have to do is point the muzzle of a gun at any person, including your own hand, foot, etc. Points can also be rapidly lost by minor mistakes, such as not going through all the steps of demonstrating that a gun is safe correctly. Again, I scored 98%. My error in this test was slightly more worrying - I forgot to put the safety on the pump-action 18-gauge shotgun I was demonstrating how to load. I incorrectly assumed the safety was automatically engaged when the action was cleared... oops.

As I said, I've been thinking a fair bit about guns. The non-restricted firearms I will be able to purchase, borrow, store, transport, etc. are all long-guns. The practical test (and of course the training) included some nice hands-on experience with all five action types of these guns: hinge, bolt, lever, pump, and semi-auto. Other action types are either very rarely found on long-arms (revolver), are found only on prohibited weapons (fully automatic), or are beyond the scope of this course and most of the relevant legislation (black-powder muzzle-loader, exotic non-gunpowder type propellants). I was surprised to discover that all action types are common on both modern shotguns and rifles - I'd never really heard of a semi-auto shotgun before, but we handled one in class (a 12-gauge recoil-operated model).

This was all useful information, and now I'm pretty confident that I'll be able to act safely around the types of guns I'm likely to encounter in my fieldwork - bear deterents like the pump-action 12-gauge shotguns used in Churchill (Fig. 2), and the various hunting rifles found in lots of places. However, we never actually fired any guns in this course (the demonstration guns were all disabled by removal of the firing pins, and all ammunition was dummy or had been drilled out). I'd really like to practice a little, especially with a 12-gauge pump-action as that seems to be the standard bear deterent in the North. Firing ranges and gun clubs apparently almost never loan or rent firearms, so I'll have to find a firearm I can borrow from someone to practice with. Prices for new firearms seem to start upwards of $400; second hand of course are cheaper, so I might be able to pick up a used gun that fits my (broken) budget. As a final weird thought for this post, I'd really like to practice with firecracker rounds for shotgun - but it's rather unlikely that a range will tolerate me blasting away with such unusual ammunition, nor am I likely to be able to borrow a gun and use such dirty rounds; only a few shots and the bore is filled with half-burned paper and other crap. Unlike the hunters and sport-shooters that are the usual customers, I want to practice using a gun for bear defense, which ideally means a four-round magazine containing two firecracker rounds and two slugs (in that order of firing), rather than the more normal pattern of only two rounds loaded, both typically some small or medium sized shot.

Figure 2. The Remington Model 870 Express is the world's best-selling shotgun. It comes in a variety of optional configurations; the most common is 12-gauge. Left-handed models are available, for slightly increased price.

Interesting stuff. Because of my general non-outdoorsyness, I can't see myself ever spending money on firearms. However, I did actually own a .22 rifle once, and found it pretty enjoyable to go out and practice at a local range.

You are now ready to take the battle back to the aliens who have secretly been attempting to conquer our world. That or the terrorists who are obviously, secretly living among us.

The best part of the course was discovering that hinge-action double-barreled side-by-side 12-gauge shotguns really do exist, and actually aren't too expensive (I've seen ads on-line at the website for Ontario firearms stores for second-hand models for less than $150). Doom 2, anyone?

Hmm, I could have used some gun training for my grad work. You never know when you'll be working late in the lab when, suddenly, a giant concrete column lurches menacingly around the corner, intent on making you its supper.

Don't let people tell you that concrete columns are more afraid of you than you are of them - that's a big-time lie.

Uhhh... sorry about this comment. It's Friday afternoon and I'm ready to go home now.

Good on you. As soon as possible I plan on getting the resticted license so I can get a handgun. Last course that ran I was on call.

Like most libertarians I really don't understand this uninformed desire to severely restict handguns that certain people have. There is no evidence it does anything useful. Its just another one of those reactive rules that lazy governments make where they don't belong. Kind of like laws for marriage.

Ahh New Hampshire the place of my dreams where carry and conceal is allowed.

Having run into several bears, mostly in parks where weapons are not allowed both in Canada and the US the whole thing seemed rather futile and humorous anyway. (We're talking parks in the raw nature sense btw, not those preened things with garbage cans).

BTW after Rogers screwed me, my blog is back up so look forward to seeing you around.

Hey Martin,
All you need to do is get back out here, I have a 12 gauge pump that you can shoot some firecrackers out of. Sorry it isn't for sale.

Oh and I know a coouple of places we can shoot it.

Cool! I'll be out in Cowtown in December, for a few days. Perhaps then.

Hmm, tehbrummell hasn't posted in a while. I wonder if he's had a firearms accident :-)

After meeting you, I'm not so sure that gioving you a gun licence is such a good idea. I think I'll write the feds and ask them to have it revoked.