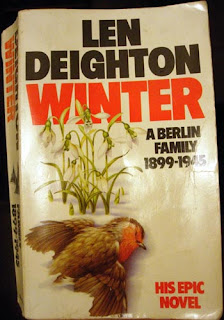 Winter is not the next book I read after I finished Blue Mars; just the next book I've actually felt compelled to discuss here. Sorry it's been so long since my last book club, but this just fits the general pattern of blog-post neglect you may have noticed here over the last two months or so.

For some context, the books I read since I finished Blue Mars are (in rough order): Fahrenheit 451 by Ray Bradbury, Clear and Present Danger by Tom Clancy, Starfish by Peter Watts, and 2020 Vision edited by Jerry Pournelle. Of those, I may yet put together some of my thoughts here for any or all, but I just finished Winter and there are a couple of things about it I wanted to write down. Feel free to ignore my written ramblings in any case.

Finding the cover picture I used was really difficult, because multiple different printings of this book all had different covers, and the most popular one on the web is much more recent; it looks like this. One hardcover edition is similar to the paperback I've got, but it's not exactly the same so I ended up taking myself the rather crappy photo you see at the top. Sorry for the low quality of the image; I need to work out a better way to photograph books than my current hold-it-up-and-snap method.

Anyway, my edition's cover and lots of websites refer to this book by the prolific author as "His Epic Novel"; in my edition's case in bright red large-font capitals. The sense of the word "epic" here is, I think, that it's a long and involved story that delves deep into a small number of characters, not the older sense of a story distinctly different in narrative structure than a novel - that would likely be oxymoronic. The two central characters of the book are two brothers, sons of a wealthy Berlin banker named Harald Winter; both sons were born just at the end of the 19th century, four years apart. It's a good read, and lives up to the hype I found on-line that describes the comprehensive research and meticulous attention to detail that went into crafting this story - one really does get a sense of place for the well-scrutinized period in Germany when the Nazis rose to power.

The most interesting thing about the book to me was the teaser prologue. The very first lines of prose in this book describe a lawyer named "Winter", no first name, who has become the defense counsel for an old colleague, a Nazi party official tried at Nuremburg after the war. As I was reading the rest of the book I was constantly trying to predict which of the two brothers would be that lawyer, and which would be the briefly-mentioned brother working as part of the prosecution for the Americans. I figured it out for sure about 3/4 of the way through; I was confident of my guess earlier, perhaps 2/3 through.

Having admitted that, I now expect that anyone else reading this book would turn to me and claim to have figured it out by page 100 of this 530 page novel. I make this prediction based on my experience with movies. Without fail, any movie with a surprise or hidden ending, or a twist, is always described to me as being "too obvious" and that the person describing the movie had it figured out five minutes in. BULLSHIT. I really wish people would stop pulling this crap, and telling me they knew who Keyzer Soze was after the first 10 minutes of The Usual Suspects, or that they predicted all along that Darth Vader was Anakin Skywalker. So if you read Winter, please don't come to me (or come here) later and tell me you knew it was Paul or you knew it was Peter all along.

'Your retarded I knew it was XXXX all along because the internets told me!!!'

Anyways, yeah perhaps we've been in similar mindsets as of late as I've gone back to reading an 'Epic' work of fiction (this one by Neil Gaiman) which I assume I will blog about when time and circumstances permit.

Sounds like yet another very interesting book that I shall never read. My list of 'to be read' books far outnumbers the amount of books I will get to in the next few years given my reading pace anyways... I'll just add it to the list.