Churchill: Bears from the Buggy II

Sorry for the delay. Here's the second bear encounter we had on our Tundra Buggy tour in Churchill, Manitoba 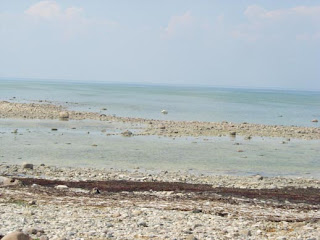 This is the first good view I had of the large male that triggered our rapid (but unpanicked) return to the safety of the Buggy. 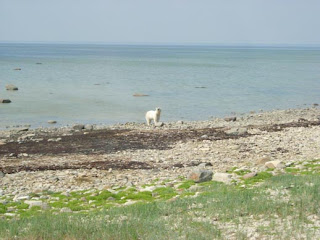 He decided we were worth a closer look 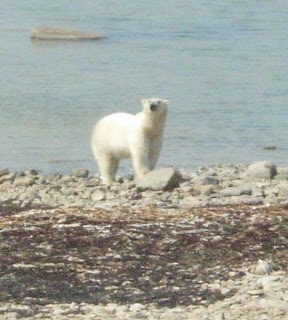 Same picture as above, zoomed and cropped. 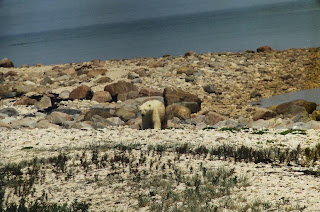 This picture was taken with my "real" camera, my 35mm film Minolta X-700, through a 400mm telephoto lens. The film was developed to CD-ROM; I have the negatives (of course) and I'm considering getting this cropped, blown up, and mounted or framed. It doesn't come through very well in digital form, but film (ISO 400 in this case) usually has much better resolution than digital. Modern digital SLRs might now be acheiving similar resolutions, though - not that I own one or am likely to in the foreseeable future. 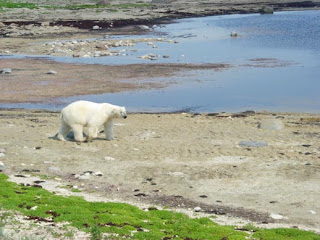 He walked across the front of our Buggy, about 50 meters out, then slowly approached at an oblique angle from the starboard side. 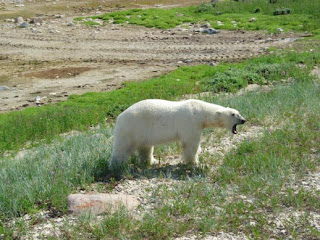 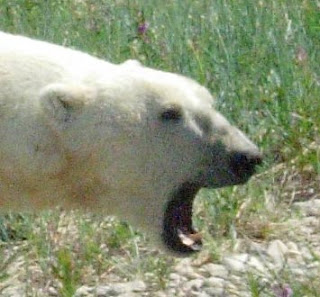 Look at those teeth! Sorry there's no scale bar in this picture, just remember that his skull is probably 70cm long or so. His gape here is probably about 50cm, more than sufficient to bite all the way around my waist. If he was being really scary he'd probably pull his lips back all around, showing the teeth at the front more clearly and exposing the canines and molars along the sides. 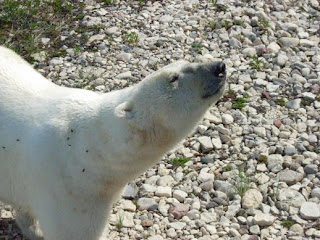 Cute, isn't he? He's probably thinking "How do I get one of those tasty treats out of this can?". Note the big horseflies (Diptera: Tabanidae) on his neck and shoulder. Those flies are about 2cm long.

After sniffing at us for a few minutes, he wandered off in the general direction of the mom and cub we'd seen earlier. Polar bear males frequently kill cubs, especially when they're hungry (e.g. mid-summer). I don't know what happened after he left us, but mom and cub had a good 10 km head start on this guy, and he wasn't moving very fast, so I expect they're fine.

Do they really refer to the sides of the buggy as port and starboard? It's a buggy not a boat, afterall.

That's a bored looking polar bear you've got there. Looks all cuddly; probably looking for a quick snack and a nap.

I'm worried about those big flies. Any of them come after you? I had a bunch of flies biting me and my family on a recent trip - pain in the ass they were, and they were half the size as these monsters.

I don't know if anyone else on Earth refers to the sides of a Tundra Buggy as "port" and "starboard". I just like the terms as generally useful for talking about vehicles that travel in two dimensions. Plus I get to sound all pretentious.

I'm worried about those big flies.

You should be. Tabanid diversity around Churchill was pretty high, probably something like a dozen separate genera were buzzing around. The really big ones, like you see on this bear, are locally referred to as "bulldogs". They're freakin' scary.

Like most biting insects, it's the females that are after blood; they're being good mothers by providing a protein-rich meal to their developing eggs. Mosquito mouthparts are a syringe, for drawing blood. Blackflies have tiny pincers that clip a skin sample. Horseflies have a structure that looks like Edward Scissorhands' thumb and two fingers. They land on you, then go head down and push this mess of blades into your skin. Then they spread the blades and take the shredded tissue in the middle.

Mosquitoes itch, though occassionally the big Northern ones are actually painful. Blackflies I mostly didn't notice until after the bite, when I'd touch my face and my fingers would be bloody. But horseflies feel like being stabbed (which, technically, is exactly correct).

The other great thing about Tabanids is that they are excellent, powerful fliers. Mosquitoes can't fly as fast as a human walks, which is why you sometimes don't meet any until you stop moving, then the ones following you catch up. We had tabanids, perhaps 30 or 40 individuals, easily pacing us in our little Zodiac in the middle of the Churchill river, 200m from shore. They've been recorded routinely achieving level-flight speeds upwards of 30 km/h, and they don't care about crosswinds, up- and down-drafts or other weird turbulence - they just fly straight in and land.

I'll post my pictures of Belugas Delphinapterus leucas sooner or later; about 1/3 of those pictures include an out-of-focus Horsefly that happened to intrude between the camera and the whale.

Do males recognize their own cubs, or do they kill indiscriminately?

Do males recognize their own cubs, or do they kill indiscriminately?

I don't know. My understanding of polar bear male behaviour is that it's similar to male lion behaviour. Male lions have been reported to kill the cubs of the females of a pride recently taken over (usually by killing or driving off an older rival male). The reasoning here is that this triggers estrus in those females now that they are no longer providing milk to their young, so the new male can produce a large number of his own cubs and not worry about wasting resources on cubs from a rival male.

In polar bears, I think due to the long pre-weaning period (more than 2 years), a male may be able to gain a similar advantage by killing the cubs of a female. However, I think hunger also plays a big role here, such that cub killings are more frequent at certain times of year, and that some people are worried that climate change, by extending the ice-free summer period and thus restricting bear access to seals will increase the occurrence of cub killing.

If it's mostly driven by sexual competition (like lions), then I expect males would be less likely to kill their own cubs, assuming they can recognize either their own offspring or a female they've mated with in the last two years. If it's mostly hunger, then probably they kill cubs randomly, without respect to paternity.