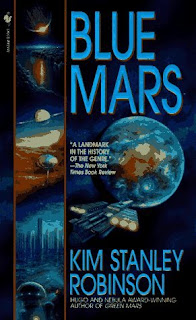 I finished this book about a week ago, as astute (bored) readers may have surmised when I replaced it on my "currently reading" list with another book. I haven't been doing much reading for fun over the last month, mainly due to the massive levels of review-paper reading I've been doing. Anyways...

Blue Mars continues the story of the earlier two books in the trilogy, Red Mars and Green Mars. Blue Mars is the longest book in the set, weighing in at over 760 pages. The author's themes of memory, extreme longevity, and political activism really come into play in this book. We see the same characters as in the previous two novels, but now several of them are over 200 years old. Time passes in this book in a more erratic manner than in the previous novels - some individual paragraphs cover one day in one sentence, several years in the next. It can be a little disjointed, in that respect, but I get the feeling the author was using this effect deliberately to emphasize the sameness of the years when a person has lived more than two centuries.

Near the end of the book is one of the best descriptions of science as a human activity that I've ever seen. For context, the chapter is presented in the view of Saxifrage Russell, one of the recurring characters in all three books; a complex and multifaceted character that resists categorisation. However, Sax is a scientist, and throughout the trilogy is presented as a scientist first, man second - he is happiest engaged in the practice of science, in talking about science with other scientists. An earlier scene in Green Mars has Sax thoroughly pleased to be at, and enjoying every minute of, a major scientific conference. A couple of other characters are mentioned in this passage; Vlad and Michel are other scientists, recently deceased, who were long contemporaries of Sax as other members of the "first one hundred". Vlad was instrumental in inventing the procedure that allows people to live to 200 years old and older; Michel was the psychologist-psychiatrist-therapist who studied and sympathised with all of the first one hundred throughout the trilogy. This scene happens in the middle of Sax's attempts to solve a problem associated with extreme aging, a phenomenon of memory disruption and sudden death in the very, very old. Because this passage is so long (the first paragraph covers almost two full pages), I'm not going to put it in quotation format. Any typos or similar errors in the below are my fault.

And so he struggled on. As he did he saw it anew, as fresh as in his undergraduate days: the structure of science was so beautiful. It was surely one of the greatest achievements of the human spirit, a kind of stupendous parthenon of the mind, constantly a work in progress, like a symphonic epic poem of thousands of stanzas, being composed by them all in a giant ongoing collaboration. The language of the poem was mathematics, because this appeared to be the language of nature itself; there was no other way to explain the startling adherence of natural phenomena to mathematical expressions of great difficulty and subtlety. And so in this marvelous family of languages their songs explored the various manifestations of reality, in the different fields of science, and each science worked up its standard model to explain things, all constellating at some distance the basics of particle physics, depending on what level or scale was being investigated, so that all the standard models hopefully interlocked in a coherent larger structure. These standard models were somehwat like Kuhnian paradigms but in reality (paradigms being a model of modeling) more supple and various, a dialogic process in which thousands of minds had participated over the previous hundreds of years; so that figures like Newton or Einstein or Vlad were not the isolate giants of public perception, but the tallest peaks of a great mountain range, as Newton himself had tried to make clear with his comment about standing on the shoulders of giants. In truth the work of science was a communal thing, extending back all the way into prehistory, as Michel had insisted; a constant struggle to understand. Now of course it was highly structured, articulated beyond the ability of any single individual to fully grasp. But this was only because of the sheer quantity of it; the spectacular efflorescence of structure was not in any particular incomprehensible, one could still walk around anywhere inside the parthenon, so to speak, and thus comprehend at least the shape of the whole, and make choices as to where to study, where to learn the dialect of the language relevant to the study; which in itself could be a formidable task, as in superstring theory or cascading recombinant chaos; then one could survey the background literature, and hopefully find some syncretic work by someone who had worked long on the cutting edge, and was able to give a coherent account of the status of the field for outsiders; this work, disparaged by most working scientists, called the "gray literature" and considered a vacation or a lowering of oneself on the part of the synthesist, was nevertheless often of great value for someone coming in from the outside. With a general overview (though it was better to think of it as an underview, with the actual workers up there lost in the dim rafters and entablatures of the edifice), one could then move up into the journals, the peer-reviewed "white literature," where the current work was being recorded; and one could read the abstracts, and get a sense of who was attacking what part of the problem. So public, so explicit.... And for any given problem in science, the people who were actually out there on the edge making progress constituted a special group, of a few hundred at most - often with a core group of synthesists and innovators that was no more than a dozen people in all the worlds - inventing a new jargon of their dialect to convey their new insights, arguing over results, suggesting new avenues of investigation, giving each other jobs in labs, meeting at conferences specifically devoted to the topic - talking to each other, in all the media there were. And there in the labs and the conference bars the work went forward, as a dialogue of people who understood the issues, and did the sheer hard work of experimentation, and of thinking about experiments.

And all this vast articulated structure of a culture stood out in the open sun of day, accessible to anyone who wanted to join, who was willing and able to do the work; there were no secrets, there were no closed shops, and if every lab and every specialization had its politics, that was just politics; and in the end politics could not materially affect the structure itself, the mathematical edifice of their understanding of the phenomenal world. So Sax had always believed, and no analysis by social scientists, nor even the troubling experience of the Martian terraforming process, had ever caused him to waver in that belief. Science was a social construct, but it was also and most importantly its own space, conforming to reality only; that was its beauty. Truth is beauty, as the poet had said, speaking of science. And it was; the poet had been right (they weren't always).

Reading and re-reading the above, I feel like I could write thousands of words deconstructing and analysing Kim Stanely Robinson's opinion of science, as expressed by his fictional character. Perhaps another time. Comments to seed such an essay are of course invited and welcomed.