My first PhD committee meeting was this morning, at which my proposal (see previous post) was discussed, and much feedback was given and recieved. The formal, administrative part of the meeting was the Signing of the Form. My committee members all (there are three of them) APPROVED my proposal, but with the caveat that I need to revise it in line with their recommendations. This revision process is less structured than the basic process of the timing and composition of the meeting, so some of the stress has certainly come off - the hard deadline for the revision doesn't yet exist, just a promise to have it done in a "reasonable time frame"; I'll set a deadline for myself, rather than have one imposed from somewhere. So, overall, pretty good.

The revisions and recommendations of my committee were quite good, actually. Unlike the vibe I'm getting from some of the other grad-student-bloggers I read regularly (you know who you are), the advice I'm getting is mostly relevant and reasonable. Much of the focus of today's recommendations, for example, was on improving my PhD project with two practical goals: make my comprehensive examination committee happy this fall and make my research much more likely to be published in the peer-reviewed literature. I now have a fair bit of work to revise my proposal (essentially, I need to invert it, remove about 1/12 of it, and add perhaps two pages worth of "I will use X to do Y"), and it's been drilled into me that my PhD will be very hard work, very much a "full throttle" kind of project, but for the next couple of days I can perhaps not spend all my time at school obsessing over next summer's plans. Just most of my time. 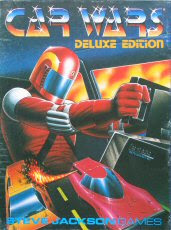 Last post's comment thread somehow wandered down memory lane with a discussion about Car Wars and general geekiness. I'm going to expand on that here.

Car Wars is one of my favourite games. It's certainly no role-playing game (much more "roll-playing"), but it's also much more open and unstructured for reasonable comparisons to board games. It's perhaps most similar to minitures table-top wargames, and I believe it has been described as such by one or more of the game developers.

I'm just going to take a moment now and remember some of the good times I've had playing Car Wars.....

OK, I'm back. Anyway, for those unfamiliar, Car Wars is a game in which the players design their own combat vehicles (i.e. cars with guns) and fight against each other, often in arena combat within a well-defined space. It's a tactical wargame in that the strategy part all happens before play, in the choices players make in the design of their vehicles. The time frame is very stretched, such that one second (one turn) of game time can take upwards of 30 minutes of real-time to conduct.

A typical game of Car Wars might involve 4 players and a medium-sized arena, representing an area of land roughly equivalent to a football field. The arena is a piece of paper covered in 1 inch and 1/4 inch grid (faint 1/4 inch lines, heavier 1 inch lines); a map that represents the area of play. The cars are cardboard counters, usually 1 inch long and 1/2 inch wide, with a top-down view of a car. The details (beyond the size) of the counter don't matter; what matters is the design on paper that each player has. Given the number of options in car design, the possible combinations of body style, engine, wheels, weapons, armour and accessories rises to some stupid number. Obviously, a large portion of that combination-space contains illegal (e.g. engine not powerful enough) or simply poorly constructed (e.g. weak front armour) options. But the possible decent combinations are very large in number, and the "optimal" design cannot be predicted before play starts, since this is (in some respects) really a game in game-theory terms; the best decision a player can make at any given time depends to a large extent on the decisions made or possible decisions other players make.

Anyway, once everyone has figured out their cars, and placed them at the entrances to the arena or whatever pre-determined start locations and velocities have been agreed upon, play starts. Each turn represents one second of game-time, and is subdivided into five phases. At low speeds, most of those phases won't matter, but as the cars reach moderate and faster speeds, upwards of about 40 mph, every phase has something happening in it. The usual victory conditions are simply total victory - last car standing. Drive, shoot, crash, burn. Really, it's pretty straightforward. Decisions like loss of control at high speeds and whether one's machine-gun burst hits one's target are determined with dice rolls, with minimum roll for success modified by a long list of factors (e.g. it's harder to hit something that's farther away with a gun, so longer distances on the map inflict penalties in the form of raising the required minimum dice roll to-hit).

Hilarity ensues, when we're not arguing over the exact targetting conditions (I mentioned the list was long; off the top of my head I'd say there are perhaps 40 different factors that can influence any given shot, and a further 20 that might apply only in unusual circumstances). So, it's a pretty math-heavy kind of game, with almost every action accompanied by "roll, uh... 8 or higher" or similar. Computerization (the game was first printed in 1981) would be a huge advantage in Car Wars, but nobody I know has gotten the wherewithal together to put together a spreadsheet or something that will speed up play. I'm not asking anyone to computerize Car Wars (been done, reasonably well, long ago, but Car Wars is a huge potential play space, so...), I'm asking for a program that allows me to rapidly select options and have it tell me what I need to roll to blow my opponent's front-right tire off with my Vulcan machinegun at a distance of 10 inches. Or how many incendiary rockets I need to pump through that hole in his armour to set him on fire. Or how likely I am to roll my car and die taking that corner at 75 mph.

Good to hear that the first committee meeting went well. Yeah, you'll always have to revise the first proposal no matter what. It was something that Dick here really drilled into me: A Ph.D. should be about good ideas and sure bets, not general zaniness. Three or four years is a lot of time to sacrifice to some untested mess.

Also, talk about table top games saddens me deeply. I want to play them, but cannot find gamers who don't stink (literally)...

Are you the professional gamer. I am the one of them.