As long-promised, here are some pictures I took during my four weeks in Churchill. Today, we look at a small fraction of the hundreds of photos I took during our all-day Tundra Buggy tour. I capitalized that because the name of the corporation that owned the vehicle that took us out across the northern wastelands is named "The Tundra Buggy"; it seems only proper to capitalize the proper name. All of the pictures here today are shrunken but not cropped (unless otherwise noted); file sizes of the raw images run to close to 2.0 MB in some cases. 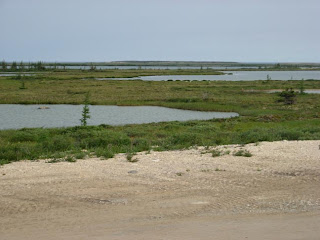 A view of the terrain from on-board the tundra buggy. Tundra is sometimes considered a desert habitat because annual precipitation is low. But, the presence of thick permafrost (I was told 10 meters thick or more) close to the surface combined with generally flat terrain plus the post-glacial rebound means water doesn't drain very well and the soil and landscape generally is soaking wet. Don't sit down on the tundra unless you want your pants to get wet. 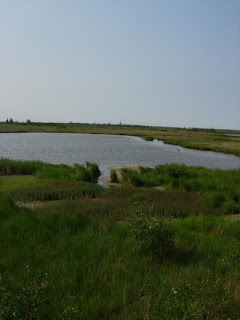 Another look at the terrain. This kind of longer grass only grew in some areas, usually close to ponds as far as I could tell. Much of the vegetation on the tundra didn't look like grasses to me, rather it was a mix of lichen and low, soft shrubs. The ground was so compressible from the layers of lichen, moss and other stuff that walking was very tiring. 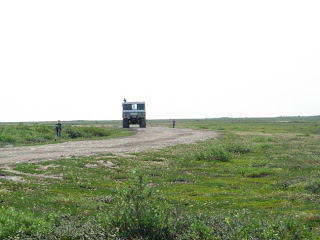 A look at the outside (front) of the Tundra Buggy. This is the first place we stopped, a seemingly randomly-chosen patch of tundra arrived at after perhaps 20 minutes of driving. The Tundra Buggy never goes particularly fast; the driver told us the tires were rated for 30 mph on good surfaces. We never got up to such speeds. The Buggy is huge, much larger than any other ground vehicle I've been on board or close to. It's about two meters wider overall than a maximum-legal-width road vehicle, and stands at least four meters tall. Total length is a little less than a full-size transport trailer. Inside, there are two rows of benches, with a central aisle, much like the school bus we rode to the "pad" where the Buggies are stored. Unlike the school bus, however, the central aisle is easily wider than both rows of benches combined. 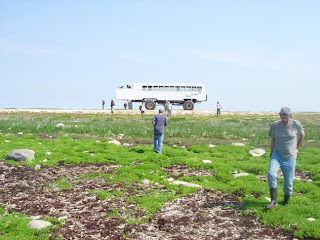 Another look at the Buggy, this time from the second place we stopped, another patch of tundra much like any other. Again, the Buggy is a large ground vehicle. Apparently, the construction is based on airport-type fire trucks, with raised up (redneck-style) suspensions, bigger tires, and the deck at the back added.

The next pictures I took on this trip are of a couple of polar bears we saw and got quite close to. I'll put those in their own post, and stop talking about large vehicles in favour of large land animals.
Posted by TheBrummell at 5:00 pm
Labels: Field Work, Grad School

That's a huge buggy. Any explanation why they need an airport firetruck to drive people around perfectly flat land? Big tires to prevent you from sinking into the melted permafrost? Large ground clearance so as to not unduly melt the permafrost?

I'm not sure of the explanation, but I haven't seen winter conditions up there, and they do run those things year-round.

I think the enormous tires are pretty much the only thing that works (short of a ground-effect vehicle) on such soft, wet terrain. Off of the 'roads' that they try to stick to (prevent erosion), going cross-country involves lots of really deep sinking in - a normal 4x4 pickup truck, for example, would probably get stuck pretty soon, either by driving into a really soft patch and sinking to the axels, or by hitting one of the many, many rocks that lie just under the moss. The giant tires and tall suspension means even 100kg boulders are not obstacles, and there are a lot of largish boulders around, even on the 'roads' that get travelled every day. I don't know what the ground pressure is under that Buggy, but I suspect it's quite low.

There are also frequent occassions to get wet, driving through or through the edge of some tundra ponds, which are nearly uniform in their depth - they drop vertically at the shore to about 60 cm deep, and have flat, very soft bottoms all the way across. Sometimes the ponds are so densely scattered on the landscape that the Buggy has no choice but do drive through one. Apparently, last year the buggy tour got stuck and had to be rescued by a very large tow truck thing (basically an off-road crane, from what I've been told) because the driver decided to unnecessarily go through a pond. The ponds we crossed had been crossed repeatedly before, so the soft parts of the bottom had been pushed away, exposing the gravel-and-boulders underlayer.

In winter, they tell me those ponds all freeze solid - not surface ice, but a continuous block of ice from the surface down into the saturated soft bottom. The posted regulations for vehicle use at the station included a very short section for winter activities: in a truck, don't bother unless you're going to town. On a snowmobile, go wherever the hell you feel like. I think the Tundra Buggies just go wherever in winter, as well. As long as you don't drive too far out on the sea ice, you're fine.