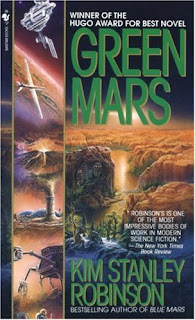 This is the second book in Kim Stanley Robinson's famous Mars trilogy. It's written in slightly different style from the first book; rather than each section being devoted entirely to individual characters, the focal-character shifts within some sections, and some characters are the focus more than once in the book. The result doesn't feel quite as well planned as did Red Mars; some parts seem to have been thought up more 'on the fly' than anything in Red Mars, which followed a very definite and logical story arc through the range of viewpoints of the characters. In Green Mars, many of the same characters from Red Mars are still around and central to the story. So we get further chapters written from the points of view of Ann, Maya, Nadia, and Sax; this is not a bad thing, as one of KSR's themes (there are several) is centered on aging and memory. By the end of Green Mars, some of the characters are more than 150 years old, and their grandchildren or great-grandchildren are late-middle-aged or older and occupy important positions in society (and the story).

I found this a bit of a slower read than Red Mars, possibly because Green Mars didn't seem quite so fresh. It also suffers a little from second-book syndrome, which by successful trilogy formula means the second book advances the plot but does not tie off any threads or close any avenues of theme or characters. Think of the downer ending to The Empire Strikes Back, or the building up to something big feel to the last half hour of The Two Towers. Green Mars is also really long - the last few lines of text are at the top of page 624. Still, I picked up Blue Mars (the final volume, discounting the supplemental anthology Purple Mars) as soon as I put Green Mars down, so I'm certainly not going to say I didn't enjoy Green Mars.

Posted by TheBrummell at 11:35 am
Labels: Reviews

Many people have told me to read this series. I'm still not off my Non-fiction binge yet, but once I am, I'll give this one a look.