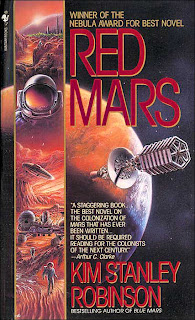 One of the more famous books I've read in the last few years. Red Mars is the first book in a trilogy (Green Mars and Blue Mars are books II and III, respectively), but it stands alone as a complete story in my mind. Actually, it's so big, and so detailed, and covers so much literary ground, that it could probably survive getting subdivided into two separate books.

The format of the books is unique among science fiction books I've read - actually, it's unique among all fiction I've read, as far as I can tell. The book is divided into eight parts, each told from the point of view of a different main character. This results in each of the eight most important characters getting their turn in the spotlight, with their thoughts, emotions, motivations, and secrets described to the reader over a few tens of pages, then returning to the background for the rest of the story. Characters described in early parts are strangely well-known when they re-appear in later parts. Several years of story time may have passed since the reader knew this person so well, and the story does include characters aging and changing through time - none of the main characters are at all one-dimensional or static. Secondary characters, that are never dissected, are not one-dimensional, either.

There are many reviews of this award-winning book (and the whole trilogy) available on the web, so I'm not going to go into much detail here. Most of these reviews are very positive, but I found one that is quite negative. It's an interesting read, if only because the viewpoint expressed is so different from my own - I found it very easy to care about the characters, for example, and I really enjoyed the great descriptive detail about the surface features of Mars. The planet is almost elevated to the level of a character in its own right.

I would have liked a few more helper notes inside the front cover - a list of names of the First Hundred, and a larger and more detailed surface map of the planet (that included the polar regions) would have made the read a little nicer. Otherwise, I think this is a great book, and I highly recommend it.

I've heard very, very good things about the trilogy from my sci-fi enthused fans. But I'll have to read it myself before I can comment.

I should say that George R.R. Martin's Song of Ice and Fire Series takes the shifting perspective story-telling style to a whole new level and I really, really enjoyed it. I guess it's just another reason why I should pick up the 'Mars' series...

I have the first book of George RR Martin's series; it's high on the list of books-to-read-as-soon-as-I-finish-this-one.

I just checked amazon.ca - they have the French-language version of the entire trilogy (in one volume! It must be huge!) on sale right now. I couldn't find the Englsih-language trilogy all-in-one.

Sorry, I just re-read that and realized that 'fans' should be 'friends'... I think that I meshed two different sentences leading to the illusion of big-headedness...

Good book, don't agree with negative review. Been meaning to read the others, thanks for the reminder.

As an aside, can you consider this fish, Channichthyidae, for a Friday fish? The reason I am asking is I heard about it being the only vertebrate not using hemoglobin as an oxygen carrier and found that incredibly interesting. Sadly I have not found a decent summary of how it carries oxygen to its tissues, and wondered if the fish-guy knows, or could provide a decent summary?

Hello Langmann, I don't think I've seen you around here before. Welcome.

"Most or all species are without red blood cells, and their blood is nearly colorless. the muscles lack myoglobin. Survival is probably permitted by the fish living in extremely cold, well-oxygenated water and having skin respiration and a large volume of blood that is efficiently circulated."
11 genera, about 15 species (Eastman and Eakin, 2000).

Nelson seems to be implying that the combination of efficient circulation, very low temperatures, high dissolved O2 content, and permeable skin allows these fishes to survive on just dissolved O2 rather than requiring special O2 transport beyond what water can carry.

I'm not really the fish-guy; I just like pretty pictures of fishies. But I'll try to track down some info on these fishes.

OK, I figured out a couple of things about Channichthyidae:

1. They've lost the genes for Haemoglobin and Myoglobin through deletions - though current researchers cannot say whether the genes were inactivated prior to deletion.

2. Loss of Haemoglobin and Myoglobin does NOT provide a physiological benefit to these fishes - their blood circulation is more efficient than other, related fishes', but such modifications are not enough to compensate, energetically, for the loss of these genes.

3. The Man, as far as icefishes go, is Dr. Karl-Hermann Kock, who works at an unpronounceable-in-English institute in Hamburg. He published a pair of reviews of icefishes in back-to-back issues of Polar Biology at the end of 2005. I will be reading those papers.

I'm always open to suggestions for Friday Fish - lately I've just been dropping Nelson (2006) open to a random page on my desk.

Yeah I found it really interesting that the fish could survive just on dissolved oxygen. Humans I think utilize hemoglobin for like 98% of our oxygen content in blood. Granted I understand O2 can be better dissolved in cold salt water, but I think it is even higher content in air (21%).

Does this fish move slowly? I don't expect that it does, I bet it moves generally as fast as any other fish.

If you find out anything more I am interested.

Also I think the fish is quite pretty, many of that subspecies are a great shade of blue.