and the problem of cell nuclei.

Among my too-many current projects (Fig. 1), I'm trying to discover a method for preserving animal tissues in the field that will allow me to measure genome sizes later, either by Feulgen densitometry or by flow cytometry. The central problem is in two parts.
1. Fixation is distinct from preservation. Tissues need to be fixed in a state that's as close to life as possible, then preserved in that state; usually these two chemical processes require distinctly different chemicals. The most common fixative is formalin, and the most common preservative is ethanol.
2. Genome-size measurements require intact cell nuclei and a background free of certain common chemical groups, particularly aldehydes. Formalin is an aldehyde, so any tissue saturated with formalin will take up the stain I use (Schiff's reagent) everywhere, resulting in a tremendous background stain that makes measurement impossible. Ethanol dehydrates cells (this is part of how it works to prevent microbial and fungal decomposition), and thus dehydrates and ruptures cell nuclei. 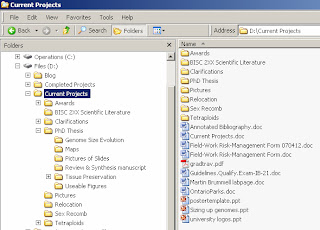 Fig. 1. A snapshot of Windows Explorer on my laptop's harddrive, showing that I'm currently working on far too many things at once. Side projects are good, but too many leads to head-banging-on-desk frustrations.

So my dilemma is to find a chemical (really, most likely a solution of multiple components) that I can use to preserve tissue in the field so I can send my samples back to the lab to deal with later, thus maximizing time in the field spent collecting samples and not dissecting or staining, activities better carried out back in the lab. The literature on this subject is remarkably scattered and superficial, apparently because few other people have encountered this problem so severely before. Or I'm just overreacting to a percieved lack of field-time, and I should just forget about it and do the dissections in the field. Or I'm incompetent at literature searching.

So far, I've discovered that a handful of entomologists and parasitologists have been using propylene glycol to capture and preserve insects and cryopreserve mammalian blood, respectively. This could be very useful, but I've had problems getting small insects (Drosophila melanogaster) to sink into the PG solution - they tend to sit on top of the solution surface tension, so I've also started looking into surfactants (detergent, essentially) that might solve this problem without trashing nuclear membranes.

The other, related, problem I face is that many invertebrates, particularly molluscs, are difficult to anaesthetize / euthanize. Snails especially seem to have ridiculously slow metabolisms, to the point that even immersion in highly toxic substances such as 70% ethanol or Sodium pentathal can take up to four full days to kill larger individuals. For comparison, it takes about two seconds for a medium-sized insect to stop moving when immersed in 70% ethanol, though some tough specimens will keep thrashing around for up to a minute. As I mentioned before, ethanol is not suitable for my purposes. Sodium pentathal isn't likely to be useful, either, since it's a controlled substance and pretty expensive.

So I've been reading the malacology literature; some relevant parts of this body of work date from the 1950s, and some articles can be difficult to track down. Yeah, yeah, the academic's whine. I'm also trying to design an experiment or series of experiments to test some ideas directly, an emiprical approach that, while likely to be fairly time-consuming, would be the ideal solution to my problems since I'd be doing the work myself and tailoring the approach and evaluation to my own purposes. The 'accomodation' to existing knowledge part of any experimental approach (the other part being 'prediction') does suck up a huge amount of time, and doesn't feel like I'm accomplishing much until I start writing - which could be abritrarily far away in time. I'm probably just feeling the early-PhD-blahs, though. Reading the above, I should probably just sit down and design the damn experiment. Then my as-yet-unformed committee can trash my experimental design and enjoy themselves, which is probably a good thing.

Anyway, I'm considering asking around the scientific community for help on these issues, but I don't know the proper etiquette for such a request. The options I've considered so far include:
a) This blog post. Done, I guess. Comments obviously welcome
b) Comments on other blogs with wider or more specialist readerships, such as Pharyngula, Sandwalk, or Genomicron.
c) Questions to on-line forums, though I do not know of any specific forums yet. I haven't searched for "Ask a malacologist genomicist" yet.
d) Questions to email lists, most obviously EvolDir, and a search for something appropriate in the malacological or entomological communities.

Unfortunately I don't have any suggestions to offer you, I'm not a very good chemist. The PG solution sounds like it would be alright if coupled to some form of disinfectant plus hermetic sealing? I'm not sure about the degradation rate of intact nuclei though.

My only advice is to figure out what you can and cannot do right away, you don't want to learn that your plans failed utterly 12 months in. Hope I'm not scaring you!

Good luck on your studies.
Just a note of caution that propylene glycol will degrade with exposure to air, light, heat to form acids and aldehydes.

Hmmmm... so, if I'm going to use propylene glycol, I'll need to use air-tight, opaque containers and probably keep everything frozen or at least cool.

I'll order some opaque microcentrifuge tubes, then, since the overwhelming majority of my samples will be small enough to fit in that. Thanks for the advice.