Book Club: The World Until Yesterday 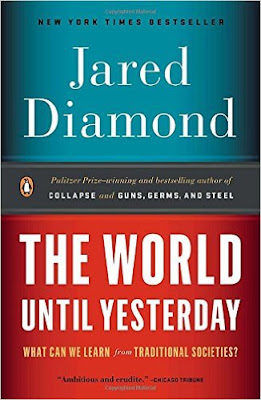 "What can we learn from traditional societies?" is the subtitle of this book by the author of one of my favourite books of all time, Guns, Germs & Steel. Dr. Diamond is a biologist and geographer employed by the University of California, Los Angeles whose fieldwork has included decades of interactions with members of traditional societies, particularly in Papua New Guinea.

Unlike an anthropological investigation, the subtitle's question is not "learn about traditional societies" and invites us - those of us who don't live in a traditional society - to take what we can from lessons of observation. The book is divided into sections that cover major ways in which traditional societies differ from civilized societies, such as child-rearing practices and settling disputes and conflicts.

The term "civilized" may be controversial and Dr. Diamond mostly avoids using it (I use it in the literal sense; the word means "city builder"). He defines "traditional societies" not in opposition to those of us who live in cities and nation-states with books and processed food and tall social hierarchies, but simply as societies that closely resemble how all people lived until the dawn of agriculture. Hence the main title, in reference to the fact that something like 99% of the time of human existence has included no agriculture and no cities. He repeatedly makes the point that the very broad diversity of traditional societies and how such people accomplish basic human universal tasks represents a natural experiment; we can observe the 'results' of these experiments and gain useful knowledge to improve the organization and daily life of our own societies.

The enormous diversity of traditional societies makes it difficult to draw broad generalizations except by defining the term against non-traditional societies. Dr. Diamond describes a hierarchy or social-development pathway (while reminding the reader that societies can and have moved in the opposite direction) from bands to tribes to chiefdoms to nations, separated by increasing levels of population size, subsistence, political centralization, and social stratification. Most currently-extant traditional societies are very small, qualifying as bands or tribes, because most of the world is owned by nations. The categories grade into each other rather than having firm boundaries, so it could be argued that some of the smallest modern states or sub-state nations (I'm thinking of the semi-autonomous republics of the Russian Federation here) are chiefdoms, but the historical pattern has been one of nations annexing or destroying smaller societies.

The basic idea of the book, to present examples of ways in which various traditional societies may do things like care for the elderly and then attempt to apply some of those methods to our own societies, is intriguing and I think useful. There isn't one optimal way to live, and there is a wider array of choices than most people may be aware of. On the other hand, many of the things that traditional societies do that we might wish to emulate are embedded in a drastically different culture. Simple things, like carrying a small child so the child's face is close to the adult's eye level, facing forward and able to observe the world while in physical contact with a parent (or "alloparent", a non-related adult caregiver) may be easy enough to implement. Dr. Diamond is a little pessimistic about that example, suggesting that social disapproval in a modern society may lead such adventurous parents to abandon these attempts, but among the parents of young children I know, caving to social pressure like that doesn't seem particularly likely.

I either disagreed with or was apathetic about many of Dr. Diamond's suggestions for changes to modern society. Many of his examples, comparing how some particular traditional society did something to what he's seen in Los Angeles seemed to me to be maximized differences by comparison to LA or the broader culture of the United States; comparison with other modern societies such as Canada or various European cultures might not make the difference seem so stark.

Other examples ignored one of the most important differences between traditional and modern societies - the risk of death at any age. It's facile to compare causes-of-death between the two categories of societies and imply that intertribal warfare or infected wounds have simply been replaced, one-for-one by modern car accidents and heart attacks. Yes, those are the leading causes of death in most modern societies - and Dr. Diamond does devote considerable text to the questions of non-communicable diseases such as heart disease and diabetes - but the every-day risk of dying in an automobile collision is drastically lower for a member of a modern society than any potentially-corresponding hazard faced by traditional societies.

The consequence of our modern lack of death is dramatically different demographics. Unfortunately, Dr. Diamond does a very poor job of describing these differences. He relies heavily on the often-misunderstood concept of expected lifespan. Given his scientific training, I do not think Dr. Diamond fails to understand this concept, but he fails at clarifying it for his readers.

The most commonly cited measure of life expectancy, period-specific life expectancy at birth, is based on a number of factors and does not apply in many situations that many people try to use it in. For example, in his book Alone Against the North, modern-day Explorer Adam Shoalts discusses hypothetical, historical aboriginal populations in northern Canada as having a life expectancy of less than 30 years, and therefore there would have been no elderly people at all in those societies. THAT'S NOT WHAT IT MEANS. Sorry, I get frustrated by this stuff. A life expectancy of 40 years, to use an example that appears several times in The World Until Yesterday, does not mean that nobody much older than 40 is to be found in that society. It's an AVERAGE, a mean value based on counting how old each person was on the day they died. The period-specific part comes in when discussing societies that experience PROGRESS, which I'm going to define as the long-term improvement in human lives driven by intentional and accidental changes to human societies through time. Traditional societies, more or less by definition, do not experience progress - every day is much the same as every previous day, stretching back through thousands of years - so the different life expectancies of modern Canadians born in 1950 vs. in 2000 are not relevant here.

A life expectancy of 40 years at birth could be created through a wide range of factors, but the most common among humans is a high death rate for infants and children combined with a lower and fairly steady death rate for ages higher than early childhood. Extreme values - those that are far from the mean - have high 'leverage' because they have a large influence on the value of that mean. A population in which large numbers of people die shortly after birth but those who survive typically do not succumb until much older will have a mean life expectancy that few people would be expected to actually die at. A society with a life expectancy of 40 years probably has many people much older than 40 and many dead children, who conveniently get swept out of sight and out of mind. Societies with many dead children also probably have many living children, hence observers tend to miss the fact that in the absence of child-killers like periodic famines and the various diseases that cause catastrophic diarrhea there would be twice as many children teeming in those quaint villages as what you see. A life expectancy of 40 means an individual is expected to live 40 years on the day they are born. A year later the dice have already been rolled for many, many events that could have but did not kill that 1-year-old. This is true for everybody still alive, so their subsequent life expectancy is considerably higher than the at-birth population level expectancy, especially in societies where children die at much higher rates than adults - which is all societies, though modern societies have considerably reduced that difference (see Progress, above).

These demographic factors mean that modern societies differ from traditional societies in a few fundamental but apparently invisible ways - we expect our children to grow up, even premature babies and others with (sometimes severe) risk factors present on the day they are born. We expect to become old, to retire from our jobs or careers and then enjoy some time alive beyond that point. Obviously, retirement is a concept largely absent from traditional societies because their older people continue to "work" even if they're not walking a zillion kilometres a year through the bush. And we moderns famously have little experience of death, despite the trivially obvious fact that everyone dies. But with our low death rates at every age, the only civilized people who have much experience of dead and dying people (besides medical professionals) are the very old, whose memories compress the deaths of everyone they've known through their long lives into a short subjective period. Yes, everyone you knew is dead - but that process took decades. For a child without playmates because of a sweep by cholera, that process took weeks.

Getting back to the concept of progress, it is that which I believe separates modern societies from not just traditional societies but also separates us from pre-scientific societies in history. I struggle with a concept I call the "Wall of History" - I find it very difficult to empathize with or comprehend the lives of people who lived before effective cures for diseases or the ability to travel long distances and then return existed. I constantly think about how tomorrow will be different from today, but a pace of change fast enough to make that relevant (i.e., significant changes within an individual's lifetime) was missing from everywhere until approximately the Industrial Revolution. That's just me, I'm sure, but when I read Dr. Diamond's suggestions for improving modern societies by picking and choosing aspects of various traditional societies I stumble over objections based on microbiology, macroeconomics, or engineering. There are certainly some good, or even great ideas here, but I need more convincing.
Posted by TheBrummell at 8:30 pm
Labels: Book Club, Field Work, History, Life, Mildly Political, Musing, Opinion, Rants, Reviews, Science, Travel