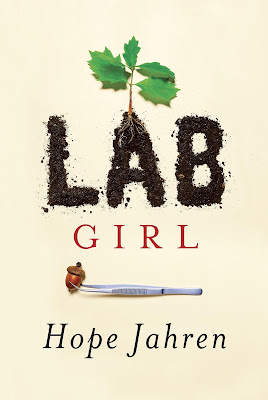 Hope Jahren is a scientist and a professor and has a blog (www.hopejahrensurecanwrite.com) that I started reading a couple of years ago. Mostly she blogs about her life and her work, which includes plenty of rants about sexism in science and related subjects – she’s a woman scientist, and this isn’t an easy thing to be. This book is her autobiography, potentially Volume I of a series because she’s far from the end of her career and/or life at this point so I assume there are many more stories to be told. But Hope sure can write so I’m quite optimistic that she’ll keep us updated as she sees fit.

This was a highly-anticipated book among the other bloggers I regularly and semi-regularly read. It was also an anticipated book among many of the people I know in real life, who may or may not have their own blogs but many of whom are women and scientists and women scientists. I bought this book in the Chapters in West Edmonton Mall in May; I was at #WEM with my post-doc advisor, Dr. Maria Strack and when I showed her my purchases I promised her I’d loan her the book when I had finished reading it myself. I’ve just loaned it to Charlie so Maria will have to either wait or buy her own copy.

I read Lab Girl in a single weekend. I haven’t read an entire book start-to-finish in a weekend like that for a long time – the last time I’m sure I did that was with Jurassic Park, and I was about 16. I think there’s something about some books that just hooks me at the right age; when I was 16 that hook was in Jurassic Park, when I’m 38 that hook was in Lab Girl. So my opinion of Lab Girl is very positive. But Book Club blog entries have never been about just reviewing a book, they (should) always be about other ideas that flow from reading a book. Such as this idea of age-dependent hooks in books (rhyming is good and fun). Oddly enough, Lab Girl was certainly not written for me, so the hook in it that got me counts as by-catch.

I say that because there is so much in Lab Girl that’s inspiring as a scientist, that gets right at what I want to do as a scientist. More than once, Dr. Jahren describes walking out into an ecosystem, and just letting the environment and her mind interact at some subconscious level until she comes up with a Research Question (capital letters denote things that are more permanent than the daydreams I romp through almost continuously). She kneels in a peat bog in Ireland until an Hypothesis regarding ecohydrology occurs to her, then she starts collecting specimens. She helps a colleague unpack samples and then spends half a decade running fossil carbon through her mass spec. But while I love those stories, they’re not for me – they’re for somebody like me but who has experienced things I have not, things like sexism and manic-depressive mental illnesses interacting with pregnancy.

Having said that, there’s actually less sexism and discrimination and injustice in Lab Girl than I was expecting based on my reading of Dr. Jahren’s blog. My impression of her blog is that she is angry – completely justifiably! – about the institutional sexism and high-level bullshit that infests academic science. That anger is present in Lab Girl, but it’s very much in the background. She may have made her blog about it, but she didn’t make her life about it. Her book, in other words, is not a product of her blog; both her book and her blog are products of her writing, which is itself a product that passes through many filters and checkpoints on its way from her life and her mind. At least, that’s my meta-impression of what of hers I’ve read. I intend to read her scientific papers (well, some of them – at one point in Lab Girl Dr. Jahren mentions a mid-career total in the neighbourhood of 70 peer-reviewed papers) for another look at her overall writing but also because I find myself in a related field. The parts about water-use by plants is especially interesting at the moment.

There are a couple of small errors, and while I really really like Lab Girl, I feel like I need to point them out. The most glaring is a description of DNA and chromosomes as protein. She’s describing the genome of Arabidopsis thaliana, that workhorse of plant genetics, and in two separate paragraphs talks about the length of protein unraveled from each cell. No. Chromosomes do include plenty of protein, but genomes are made of DNA.

In another part of the book, a shocking (to me) casual negligence toward automobile seatbelts is described. Look, just wear your damn seatbelts, OK? Every. Time. Complaints about “Grizzly Adams” field scientists not taking her seriously are much less impressive after reading her laissez-faire attitude towards field work. If you’re going to tell me you don’t feel safe around that creepy post-doc, don’t follow it up with multiple stories of car crashes and heads bouncing off windshields. The creepy post-doc might have legitimately been terrifying, but he didn’t give you a bloody nose and a concussion the way bad car decisions did.

The last thing in Lab Girl I didn’t like – and in a discussion like this I feel I need to remind myself that this is a really good book, like top 10 lifetime books I’ve read GOOD – is a description of what amounts to a “teachable moment”. After her misadventures in Ireland, which culminated in all of her meticulously documented samples being disposed of by an Irish customs agent (Get a permit. It’s not that hard. But I digress), Dr. Jahren has come up with a test of new graduate students that aims to simulate that crushed distress upon having one’s recent hard work destroyed. She describes an exercise in which a new student, somewhat insultingly referred to as a “noob” (LOL OMG BBQ) is made to carefully label a large number of sample vials in anticipation of an upcoming field trip. Then Dr. Jahren and her long-serving research partner (that’s a relationship for a separate Book Club, it’s too big to tackle here) play a game of “Good Cop-Bad Cop” that ultimately results in the entire set of vials being unceremoniously dumped in the trash. This is, on a certain level, a simulation of the end of their Irish trip. But the intent is entirely different, and intent matters.

The intent of the Irish customs agent was to enforce the law, a law that Dr. Jahren should have known about, and Dr. Jahren should have had a permit to export plant material from Ireland. There was a bit of an aside in there about checked vs. carry-on luggage and I don’t think she learned any lessons there; she did claim to have learned the lesson about permits, even if only at the “I’m sorry I got caught” level rather than the truly “I’m sorry for what I did” level.

The intent of Dr. Jahren and Bill in their test-the-noob exercise is to see if an A+ student is really an A+ student or is really a B+ student. The difference, and this is my taxonomy not hers, is that the A+ effort includes something well above-and-beyond expectations, some action that counts as Outstanding. She slyly describes a student who “passed” this bullshit secret test by pulling the vials out of the trash and cleaning them, making them potentially useful for another field trip. There’s so much wrong with that, but I’m going to just focus on the stupid bullshit of a secret test – and that’s all a “teachable moment” is. I went through one or two during my time as a grad student and they were always completely unjust and unfair. If you need me to do something, I’ll do it. If you need me to learn something, I’ll learn it. But don’t “cleverly” combine the two and ruin both. Please. Please, Dr. Jahren, please stop doing that label-vials / good-cop-bad-cop exercise. It shows considerable contempt on your part towards your student, and is a violation of trust. Cut it out.

I would be very happy if pretty much everybody I know could read Lab Girl. It’s a damn good book, a series of great stories told with considerable skill and pushed together into something much bigger than the sum of the parts. I especially want a handful of individuals I know to read Lab Girl; I’m looking forward to presenting this book, this individual copy of a mass-produced hardcover to Maria. And I want to buy more copies for other people. It seems like a mild violation of privacy to describe any of these other future-gift-recipients by name here, but I can plug the wonderful, horrifying, terrifying, fantastic writing of my internet-friend Elise the Great here, and Elise, please read Lab Girl. I’ll send you a copy or an Amazon gift code or something.
Posted by TheBrummell at 1:30 pm
Labels: Book Club, Field Work, Grad School, Life, Mildly Political, Opinion, Reviews, Science, Teaching, Travel