I visited Charlie in Regina over reading break in February, and together we completed enough recipes in this project to add considerably to her store of frozen meals.

Several of the recipes we chose - chosen as we drove back to Regina from Cypress Hills - were set up as prerequisites supplying key ingredients to subsequent recipes. In this case, the Chicken and Broth supplied chicken broth to the Quick Jambalaya; we also added some of the cooked chicken that resulted, despite not being called for in the Jambalaya recipe. 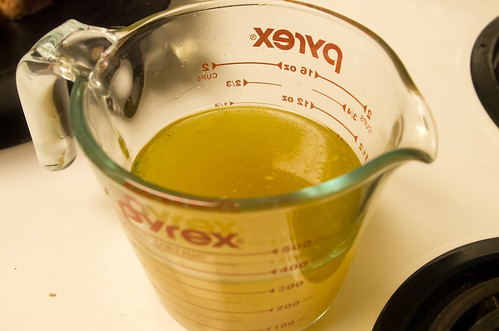 Some of the broth from the Chicken and Broth. I felt like we were using this simple recipe in the way the authors of the cookbook intended - this recipe doesn't produce a meal, or a component of a multi-dish meal, it provides ingredients to further recipes. 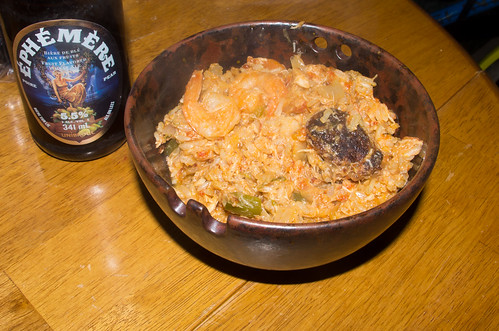 We didn't have frozen brown-and-serve sausage links as called for, and our shrimp still had tails, but we substituted regular sausages and added most of the smaller chicken pieces. I couldn't convince Charlie to dive all-in to this project and get instant rice, so we just simmered the jambalaya for longer and used regular brown rice.

***
I had to go back and change the recipe numbers when I realized we made the California Black Bean Burgers Monday, and these recipes Tuesday.
Posted by TheBrummell at 3:59 pm
Labels: Betty Crocker, Canada, Cooking, Food and Drink, Grad School, Life, Project, Travel, Vacation