As I write this, Charlie is helping with recipe #4, to come soon. Tonight’s supper was a slow-cooker recipe and thus pretty straightforward; most slow-cooker recipe’s are “throw it all in the cooker, cook it for hours” with some variation in suggested serving accompaniments. The exciting part was all in the preparation: first, I cut up a chicken! There are probably a dozen recipes in this book that have “3 to 3 ½ pound cut-up whole chicken” as one of the main ingredients, yet what we had brought to the cottage was a whole chicken. In the past, Charlie and I have enjoyed whole slow-cooker chicken, in which the resulting aromatic carcass cannot be lifted from the crock in a single piece; it always disintegrates. That would save me the trouble of the cutting, but would also stray too far for my tastes from this recipe. 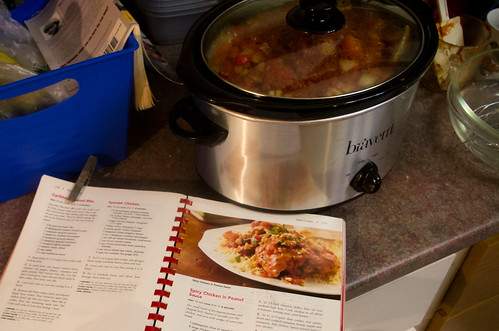 Substitutions in this recipe – I aim to limit my substitutions, especially once I am at my home and able to plan some recipes and ingredients in greater detail – include a whole cut-up chicken rather than the boneless, skinless chicken breasts called for, and four fresh tomatoes coarsely chopped rather than the 28-ounce can of diced tomatoes in the book. Also, we had no tomato paste, artichoke hearts, nor sliced ripe olives, but one of the (many) great things about slow-cookers is the time it takes to cook (slowly). We went into the Foodland in Northbrook, again, and picked up those missing ingredients. Tomato paste was supposed to go in at the initiation of the recipe, but I stirred it in at about the 3-hour point.

The outcome was excellent. Slow-cookers release the smell of their contents for hours, which is wonderful. And the taste lived up to the hyped-up press releases from my nose. Seriously, great stuff.

I want to talk a bit more about the chicken. I’ve never cut up a whole chicken before, with the possible exception of an episode in which I volunteered to prepare a large amount of part of a big Thai-themed chicken recipe when I was about 14 (thanks again, Mom!). Anyway, this activity, explained with a series of captioned pictures on page 321, counts as one of the slightly-intimidating things I will undertake as I work my way through this book in its entirety. 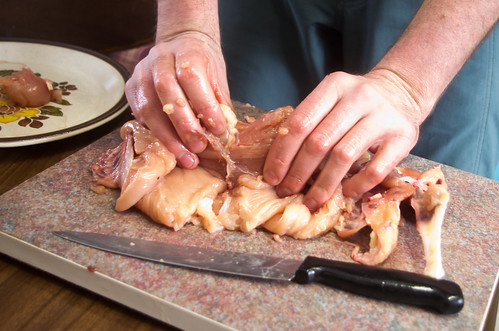