I was unable to find cornbread stuffing mix, as called for in this recipe, so I substituted with regular (wheat-bread) stuffing mix. The recipe actually calls for pork chops on the bone, but I bought boneless chops and didn't realize what this would mean until I got home and started on this recipe. Cutting a pocket in a pork chop isn't difficult, but with a bone to run into it's easier to make the pocket blind, rather than cutting all the way through.


Stuffing the chops was a bit messy but the stuff mixture - bacon, onion, green pepper, bread pieces, cheese - cooled down fairly quickly once out of the frying pan and even turning the stuffed chops in the pan - to brown them before going into the oven - did not result in the loss of much stuffing. 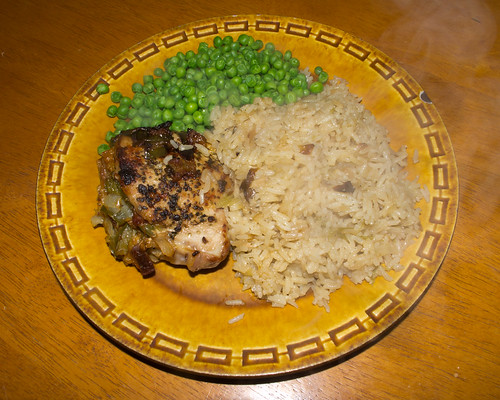 I think I overcooked these a little, they were a bit crispy, but delicious!