Lasagne is one of my favourite "entire meal" dishes to prepare, because it always generates lots of leftovers that are perfect for following-day (or following-week) lunches. In my experience, a frozen square of lasagne is about the most difficult thing to re-heat in the breakroom microwave, it's essentially an insulated brick of ice, which requires enormous amounts of heat to thaw and bring up to serving temperature.


In my previous opinion, it's not really lasagne if there's no spinach in it. This recipe lacks spinach, so I was prepared to mock it, but it's actually really good, except for the time requirement. I hadn't read the fine print, and while I had planned to prepare this on Sunday evening after my Drive, the minimum-2-hours in the 'fridge meant supper would be intolerably late; that's a big part of the reason I did Mashed Potatoes with leftover turkey, instead. So, I assembled this lasagne and put it in the 'fridge for the following day's supper. 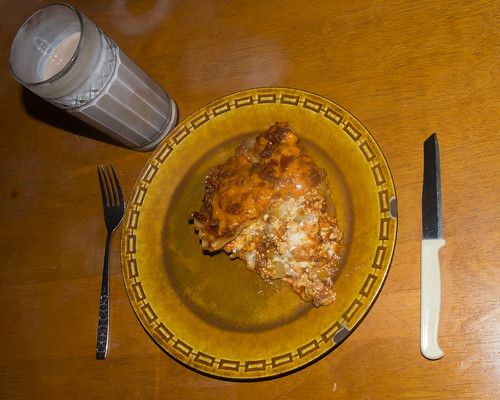 I scaled the recipe down by 1/3 (kinda, I used the full amounts of cheeses (roughly 1 kg of cheese goes into this), because another opinion of mine regarding lasagne is that it is a vehicle for cheese) but still ended up with enough for multiple days of lunches. This is a recipe that falls into the odd category of "Americans turning not-hamburgers into simulacra of hamburgers", a transformation largely resting on the bacon in this case. I also used a blob of parsely-goo from a tube rather than fresh parsely because the minimum purchase of parsely is enough for about a dozen copies of this recipe and I had no plans to make any other recipes that call for parsely. I think I can keep this tube in the 'fridge for a few weeks, which is better than the few days that the fresh stuff stays fresh for.
Posted by TheBrummell at 12:35 pm
Labels: Betty Crocker, Cooking, Food and Drink, Life, Opinion