Making Wine IV: Bottling, Bottles, and the Next Batch

Today I bottled my first batch of wine, the Rio Negro Cabernet blend that I've been working on since April. It's still not yet really drinkable, but I expect it to be so in about two weeks. The drips from the siphoning process today went into a glass, which I drank, and I can tell you that the first sip was pretty good, the second sip merely OK, and the last swallow pretty nasty. This is an effect of the settling of the heavier components, which seems to include some rather sour and unpleasant bits. I managed to avoid getting the sludge on the bottom of the carboy into any of the bottles except a little into the last bottle. The kit was supposed to make 30 bottles, but I filled 31 bottles, so only the bonus 31st bottle contains significant amounts of sludge or sediment. After I put the corks in (Fig. 1; Fig. 2), I put the bottles into my GORM rack (Fig. 3) to age. I am well pleased. 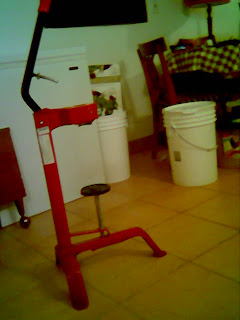 Fig. 1. My uncle's manual corker, without bottle or cork loaded. 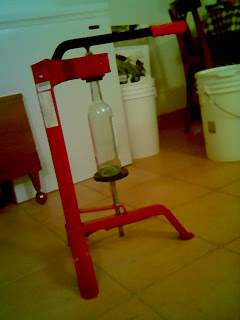 Fig. 2. The manual corker with an empty bottle and no cork loaded, for demonstration purposes. 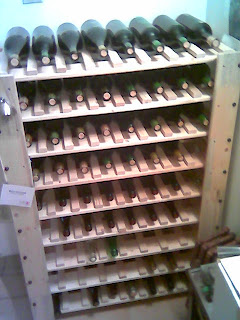 About half way through the bottling process my sister arrived, and took a couple of pictures on my crappy camera phone (Fig. 4; Fig. 5). 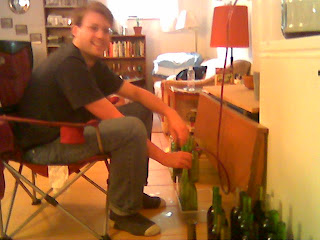 Fig. 4. Me bottling the Rio Negro, about half way through the process. The siphon is drawing from the primary fermenter / bucket just visible on the right edge of the photo. Filled bottles without corks appear in the bottom right. 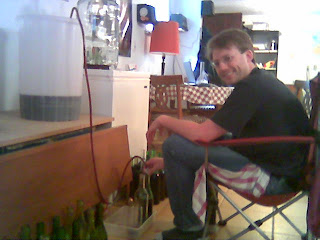 Fig. 5. A view of me bottling the Rio Negro from the other side. The primary fementer / bucket is on the left, the siphon is full of flowing wine, and my fingers are on the "bottling valve", a plastic tube-closer that helped prevent wastage as I moved the siphon between bottles. Empty bottles to be filled appear on the floor on the left, filled bottles on the right.

I have two types of bottles for my wine, I call one form "elegans" and the other "robustus" (Fig. 6). I think the elegans form is more appropriate for white wines, the robustus for reds - that's basically just my personal opinion, but in general, commercial wines follow that rule, with many exceptions, of course. I didn't have enough robustus bottles for my Rio Negro batch, so about 1/3 of the bottles are the elegans type. Both shapes hold 750 mL of wine, and I don't think the shape of the container will have any measureable effect on the taste of the wine, so this 1/3 represents only an aesthetic issue to me. I'm not actually particularly concerned, it's just something I thought about while washing my bottles. 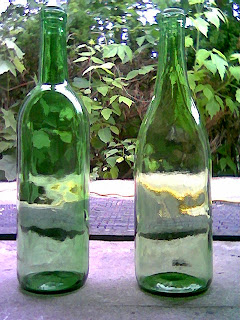 Fig. 6. Examples of the "robustus" (Left) and "elegans" bottle types. Each bottle has a capacity of approximately 750 mL. Note the difference in curvature where the body of the bottle grades into the neck - the robustus form has a much more abrupt transition.

I set up my next batch of wine as soon as I finished cleaning up the equipment after bottling. Since my first batch was a red wine, I thought it appropriate to choose a white wine for the second. It's another four-week kit, though of course that duration is only a suggestion. It's a gewuertztraminer* from CellarCraft, the same producer as my first; their "International" series of wine kits blended from grapes grown all over the world (Fig. 7). This "Global Cuvee Gewuertraminer" contains grape juice concentrate from California and from Washington state's Yakima Valley; oddly, the gewuertztraminer doesn't show up on the website. Perhaps it has been discontinued. The owner of the store where I bought this batch (he's worthy of his own post) is a big fan of gewuertztraminers, and told me I should let this kit sit in the carboy for at least two weeks after clearing, and lengthen the other intervals as well, pushing the total time required to make this wine to six weeks. Since I'll be going away for almost all of July, I think I'll just clear this batch near the end of June and bottle it in August when I return. I have been assured by several people that this will in no way harm the wine. 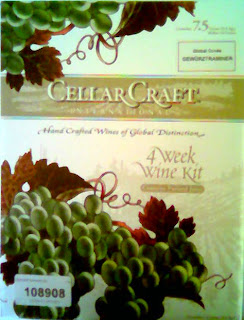 Fig. 7. The box of my second batch of wine, CellarCraft's Global Cuvee Gewuertztraminer. It's in the primary fermenter now, with the yeast and the bentonite, and I will rack it to the secondary fermenter in about a week.

* The name "Gewuertztraminer" is German, and is usually spelled without the second 'e' and with an umlaut over the u. Blogger does not make it easy to insert that symbol, so I use the mostly-accepted practice of spelling umlauts in this way, which is approximately how they're pronounced, anyway.
Posted by TheBrummell at 5:45 pm
Labels: Food and Drink, Stuff

Just thinking about label ideas;you could tie it in with your recent reading on quantum by calling it "Schrodinger's Vintage", having the bottles be opaque and only some actually containing wine. It probably wouldn't catch on, but I couldn't help but post the thought.

"Schrodinger's Vintage", having the bottles be opaque and only some actually containing wine.

I don't think I'll do that, but if I ever make a special, one-of-a-kind batch, that's a fun idea.

What should the not-wine bottles contain? Cat urine?

Man I'm so jealous. My dad's actually been hounding me to begin actually making wine as well (he's VERY into making wine, as was his father).

I also happen to love wine... I mean LOVE it. The very thought of all of that cheap wine is making my mouth water. Damn, it's my B-day in a week, I've gotta look into getting a lock downstairs so that I too can make some wine!

he's VERY into making wine, as was his father

"For I am a winemaker, like my father before me."

"Then, drink!"
*Lightning shoots from fingertips, wine glasses fly through the air and fill themselves through the power of The Force*

Sorry, I just finished watching the Trilogy a couple of nights ago.

My parents never made wine, but then there is no Polish wine tradition (it being too cold in north central Europe to grow the grapes). My uncle however did make a moonshine type vodka in his basement, in addition to cherry and plum 'wines'. Oh those were the days! Back in commie times you could be 'disappeared' for that kind of stuff!

I did try my hand at beer a couple of times. Clove/cinnamon stout anyone?

Yeah, it'll really come down to the feasibility of putting up with the smell in my apartment. I may be able to make it on my balcony, but give the crazy variance in Hamiltonian temperature, probably not... Moonshine though...

Examples of the "robustus" (Left) and "elegans" bottle types.

The one on the left is a Bordeaux bottle, the one on the right is a Burgundy bottle. These shapes are regional differences (in the same way that different regions produce different cheeses and wine varietals) and both are used for red and whites to this day.

These shapes are regional differences

Thanks for the info! But what about other countries / regions with long wine traditions - I've seen plenty of Italian and Swiss red wine sold in Bordeaux-type bottles. Are there subtle differences I'm missing that distinguish "Piedmont" or "Madrid" bottle styles? Or have the French just unilaterally taken over all things wine-bottle?

Or have the French just unilaterally taken over all things wine-bottle?

I think that may be the case. Like Mike Meyer's character from SNL, "If it's not Scottish, it's crap!" Except in this case, if it's not French.

Our super star exchnage student from France wasn't aware that other nations made cheese other than the French and Italians. Our local cheese monger (who has VERY good imported raw milk cheeses) mentioned this regarding a trip he had to France. Every cheese shop had decent Brie, Rocquefort and occasionally an asiago but you couldn't ever find a Stilton, Shropshire, county Cheddar, Premiere Cru Swiss or, heavens forfend, any of the Quebec artisan cheeses.

Glad to see that microbiology being put to really good use.