Book Club: The Man Who Mistook His Wife for a Hat 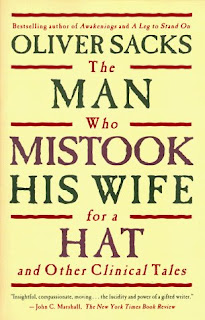 The Man Who Mistook His Wife for a Hat
and Other Clinical Tales
Oliver Sacks, 1985
Touchstone, New York

This was a fun, quick read. The book is laid out in several sections - "Losses", "Transports", and so on that broadly describe categories of neurological mishaps in case studies of patients of the author. I enjoyed it, and I only have two things to say about this book, both minor points. The first is that Dr. Sacks references other books by other neurologists in a sloppy and vague way, far too often. A particular patient, described by another doctor, is referenced at least five times in this book, and only once is it clear that the chapter on the "Mnemonist" does not actually appear in the book I'm currently reading!

The second point concerns the final chapter, about a young man with a strange mix of symptoms. He has very frequent, very variable seizures (up to 30 per day without treatment, ranging from Grand mal to other, qualitatively different forms) as well as many of the symptoms of autism. Dr. Sacks describes these symptoms, and notes the strange incongruencies as well as commonalities with other, more typical cases of autism. In any case, the great redeaming feature of this young man is his artistic ability. He is very talented at sketching and drawing, often strictly from memory, though he lacks the ability to form proper speech and has other apparent behavioural and developmental problems. He has a passion for nature, it seems, and is happiest and at his best when carefully drawing flowers, birds, and other such objects in the small garden at the hospital where he lives.

As I was reading these descriptions of this man's great joy in illustration, I day-dreamed about having such a talent with me in the field, as accurate, well-drawn illustrations of biological specimens are very valuable, both for aesthetic reasons (pretty pictures in addition to complicated graphs in one's publications) and for accurate, repeatable species identification and elucidation of phenotypic variation (among other things). About a page after I started thinking along those lines, Dr. Sacks himself starts speculating about finding productive employment for this young man, possibly as a person a researcher would send specimens to for illustration. Actually taking an autistic in to the field seems like a bad idea - I understand that autistics are generally big fans of order and routine, features not typically found as one trudges across the landscape scooping up flowers, insects, and mosquito bites. But I think it would be cool to be able to send back some field-collected specimens, for example suspected newly-discovered species, to some high-functioning autistic with great artistic talent. Just more of my daydreaming, perhaps.

"well-drawn illustrations of biological specimens are very valuable, both for aesthetic reasons (pretty pictures in addition to complicated graphs in one's publications) and for accurate, repeatable species identification and elucidation of phenotypic variation (among other things)"

I definitely agree. I've been reading Gerhard Heilmann's 1927 book The Origin of Birds for the past few days, and even though it's a bit outdated the book is chock-full of beautiful life reconstructions and labeled skeletal diagrams; I've learned more anatomy in an evening with this book than I have previously.