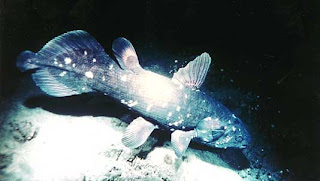 The white marks are not disease or specimen decay, they're pigment patches that researchers have used to identify individuals, in much the same way that other marine animals such as Orcas and Grey Whales are tracked. There are lots and lots of pictures of these guys on the web, so I'll put up another one. 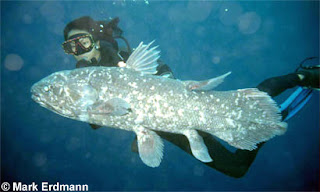 Fishbase refers to videos of interesting Latimeria behaviour, but I couldn't find any good videos on GoogleVideo or YouTube.
Posted by TheBrummell at 11:25 am
Labels: Organisms

Hooray for Latimera! I love these guys, and it irks me as well when people refer to them as "living fossils" (much in the same way people stating "sharks haven't changed in millions of years" is an easy way to set me off on a rant).

Obviously their genomes have diverged (if only neutrally) among other features, however, taken in this context, the term has potential application.

Obviously, a purist may argue that it would be preferable to make up some completely different term meaning the exact same thing in order to avoid confusion...

That's a definition I can live with. As long as it includes phrases like "visible morphology", I think it's OK.

Unfortunately, a large fraction of the global population is confused by anagenesis, as evidenced by the ridiculously stupid question: "if humans evolved from apes, why are there still apes?" and the like. So I don't think many people can grasp the subtle difference between "very few differences in morphology between then and now" and "frozen in time".

I'm glad you like my post, Brian. I didn't take these pictures myself (none of my Friday Fish pictures are by me). So your frequent, and excellent, big-cat pictures on your site are superior, in my mind.

I'm going to delete your duplicated comment, I hope nobody minds (two identical comments apparently posted at exactly the same time). Normally, my Friday Fish series gets no comments - the mean number of comments is probably around 0.05, with a mode definately of 0.

I love the Friday Fish! I just never have anything intelligent to contribute.

Thanks for the compliment Martin; I do actually take pictures of other animals, I swear, haha, so hopefully I'll have some pictures of the various other animals I've encountered in the last year other than big cats. And sorry about the duplicated comment; I left an "i" out of Latimeria and felt foolish so I tried to fix it and it doubled itself. Anyway, I love the Friday Fish so please keep it up