Last night I attended an excellent party. The host has collected a variety of edible wildlife over the past year, and held a party to expose some other people (e.g. me) to the culinary delights of the boreal forests.

The proprietor of the Roadkill Restaurant (RR) is in no way responsible for the contraction of zoonoses transmitted via wildlife such as beaver-fever (Giardia lamblia) or Tularemia which may be contracted via close contact with beavers. However, all free-range organic meats served at the aforementioned establishment are thoroughly cooked to eliminate the chances of contracting such ailments. Despite this establishment's name all food served at RR has been harvested according to local hunting regulations and the Agreement on International Humane Trapping standards.

The link was added by me.

It was a fun night. The eating-beaver jokes were just too obvious, but there were still some excellent quotes last night. Two that stand out in my memory:

"I have a new species in the bedroom!"

I'll leave it as an exercise for the reader to imagine context for those.

I also found a cheap bottle of red wine at the store earlier in the day, no varietal listed, simply labelled "Proprietor's Red", which I bought for $7. It was pretty good, actually, and I probably would have been willing to pay about $12 for it had I tasted it before purchase. It went well with the food, but wasn't quite up to the task of dealing with the moose-in-gravy, which had a VERY strong flavour. 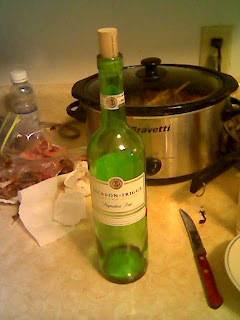 Here's a picture of the wine bottle I took with my camera phone. It's difficult to read the label, but trust me when I say it does not list "Merlot" or "Cabernet" or "Shiraz"; just "Red". The pot in the background was used to slow-cook the porcupine, with some carrots and a few spices. Those are porcupine bones you can see under the lid. I think the messy carcass on the left is from the grouse.

For the curious, moose tastes like beef with more flavour, the white-tailed deer was in the form of very smooth, lightly spicy sausages, porcupine tastes like a really good piece of roast beef, but with the appearance and texture of dark meat from turkey (Meleagris gallopavo). Snow-shoe hare has almost no flavour of its own, and was served cooked in a mayonaise-mandarin orange sauce; grouse tastes very good, like chicken should, and beaver tastes much like porcupine; i.e. a lot like roast beef (insert tasteless joke here). I was surprised by the relative uniformity of tastes among the mammals - pork and beef taste quite different from each other, but everything else I've tried tastes much more like beef than like pork or ham.

Sounds like a good time! I've eaten many non-standard mammals (Deer and Moose are usually available Chims fare at my grandma's). I agree, they all have taste and texture somewhere in between beef and lamb.

One experience I did thoroughly enjoy was eating Wild Boar. There's really nothing quite like the taste of a good Wild Boar sausage... mmm...

Cool. I've never had wild boar. I imagine they taste quite different from domestic pig.

When you said "non-standard mammals" my mind wandered down some rather strange paths.

As usual, uncyclopedia elaborated those paths for me.