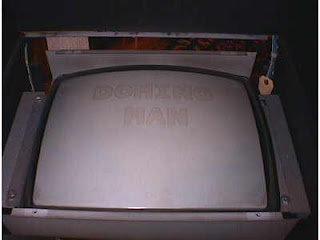 Modern computer screens are pretty close to immune to 'burn-in', the unfortunate effect in older monitors where continuously-displayed images become permanently 'etched' into a screen through complete saturation of phosphors or other image-producing chemicals. This phenomenon spawned the invention of the now universally-available program known as a 'screen-saver'. Presumably everyone reading this blog knows what I'm talking about.

Screen-savers were initially just programs that would blank out a monitor after a set period of inactivity, thereby preventing static images from burning into a screen. Moving images would be equally effective at preventing burn-in, so many more interesting screen savers were invented, based on the same underlying logic and algorithm. So now we have a zillion different screensavers available for computers, along with a host supplied as default settings on current computers.

As I said above, these are pretty much obsolete, rendered superflous to requirements by advances in monitor technology. Modern desktop CRTs (the old-school big-fat-TV things) can be left displaying a static image for days without suffering damage. Other types of monitors, like flat-panel-displays and laptop-type LCDs probably have shorter burn-in times, but these times are certainly on the order of tens of hours, at least.

My anger at screen-savers comes from the settings (particularly default settings) of screen-savers on computers, especially laptops. Why are the defaults, which so very few people bother to change, always set so short? I don't know how many scientific talks I've been to where the presentation computer (belonging either to the speaker or a presentation organiser, both of whom should know better), left to its own devices while the speaker describes a complicated figure or answers an audience question, kicks in the screen-saver and starts showing some useless fucking distracting animation shyte behind the (usually oblivious) speaker.

MacIntosh computers seem especially prone to this behaviour. I suspect that the particular combination of long battery capacity (4-5 hours, I think), stunningly-short activation times (3 minutes!), and widespread basic computer illiteracy among Mac-users chronically results in that superobnoxious multi-colour-floating-gauzy-point shitty display (apparently named "flurry") scrambling all over the monitor or screen (often very large) and pissing me off.

People, please! If you're going to be presenting, reset your computer's screen-saver timer to something half-way reasonable - I keep mine set to 120 minutes when on AC power, 30 minutes when on battery. Many screen-savers are so complicated they probably do nothing to preserve battery capacity compared to a static display. This 2-3 minutes bullshit has got to end. Or at least have the presence of mind to twitch the mouse while you answer audience questions, or when the bored-sleepy people suddenly perk up and look over your shoulder.

OK, wait a minute. If you're reading this, it's more than 99% likely* that you're reading this on a computer, most likely one that you personally have administrator-level access to, at least as far as screen settings go. RIGHT NOW, please check your screen-saver settings, and push that time-delay up into triple-digits of minutes. Yes, I know your screen-saver is pretty, and you like to watch the virtual fish swim, but you can click "test" for that whenever you want. Change those settings! RIGHT NOW!

This is the most annoying animated GIF I could find to illustrate my point with a flashy thing.

I completely agree with you in the case of presenters laptops, the Screen Saver's got to go. However, I'm not to sure about non-LCD monitors, a friend of mine's Dad worked at a company that replaced a significant portion of their screens each year to burn in. This wasn't 'long' ago (maybe 5 years) and the monitors were not hold-overs from the 80s.

In terms of screen-savers on my Desktop PC at home though, I must admit that they're growing on me. I'm not a big fan of that Windows 3.1 After Dark bullshit, but lately I've taken to filling directories with Wallpapers of video games I like or fantasy art, and letting the 'slide show' screen saver go in the background.

I generally leave my PC on while I'm at home, and don't always remember to turn the monitor off. It makes for nice background imagery while cooking-and-shit.

I agree that screen-savers do have some value in preserving monitors. It's really the ridiculously-short kick-in times that bug me the most.

No monitor will get burn-in after 30 minutes. That should be the absolute minimum setting for all screen-savers.