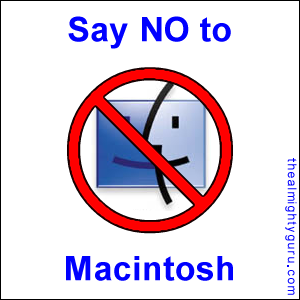 This morning, my supervisor moved the lab's aging iMac from a benchtop area to a recently-temporarily-vacated desk so an undergrad work-study could use it more comfortably. This innocuous event provides the start point for one of my more frequent rant: Macs suck.


Proponents of the Macintosh line of computers like to make statements about the supposed superiority of their machines relative to Windows-based PCs. This rant will not consider the relative merits of Unix or Linux-based computers, as I have zero experience of them.

Claim number 1: Macs are more intuitive and therefore easier to use.
No, this is incorrect. Modern Graphical User Interfaces (GUI) have obviously experienced a great deal of convergent evolution, so it's immediately apparent that there really are not many major differences between Windows XP and Mac OS 10.3. You use your mouse to point at an icon on the screen, and a double-click activates that program or opens that file. If there's something easier to use about how a Mac does this, I haven't seen it. There are some minor points, mostly relating to the esoterica of computer-human interface design, but nothing about the basic operation of a Macintosh seems different from that of a Windows computer.

Claim number 2: Macs are friendlier.
What does this even mean? Do you have some strange affinity for pretty coloured plastic backings? For single-button mice? For commercials featuring plain white backgrounds? I hardly think a sticker price 1.5x that of a similar PC counts as "friendlier". Maybe it's their customer service - but shouldn't a good computer never require a call to customer service?

Claim number 3: Multi-tasking on a Mac is easier
OK, now I get to make my outrageous (but true!) claim about Macs: THERE'S NO MAXIMIZE. Sure, you can arrange all the stuff you're working on on the screen at once, and see your word-processor at the same time as your spreadsheet. Woopdeedoo! You can do that on any GUI!!! What you CAN NOT do with a Mac is push one button and make your currrent task occupy the ENTIRE SCREEN. This small, apparently minor difference causes no end of grief for me when using a Mac - if I slide the mouse all the way to the right of the screen, and click on the slider there to move up or down on the thing I'm looking at, I expect the thing I'm looking at to move up or down. I don't expect to activate some other program, or accidentally click on the desktop (finder). AAaarrgh. I don't think I can accurately convey in words how much this lack-of-feature bugs me. Yes, the picture of a kitten on my desktop is lovely; that doesn't mean I need to see the edge of it at all times!

Claim number 4: Macs are inherently superior in available software for graphic design and other functions
So what? Do I look like an animator? Do you? Why do you need a computer capable of running $5000 professional graphic-design software if you never plan on buying such software. It's like claiming PCs are better because some nuclear power plant uses specialized PC-based software to monitor the cooling towers - why does this "feature" interest anyone?
Also, I've never actually heard this claim backed up with any kind of reasoned argument or reference. I expect there are artists out there who have recently switched to a Mac for their work because of superior available software. But superior available software changes constantly, and I expect the switch the opposite direction happens at about the same rate.

Claim number 5: Macs are safer because they're immune to viruses
Bullshit. This is just a straight-up lie. There are fewer viruses for Macs because there are fewer Macs. If you were to design a virus with the explicit goal of disrupting the lives of as many people as possible (because you are a wanna-be anarchist "haxxor"), you obviously would target the most common software around - which is usually Microsoft Outlook, itself an execrable piece of software specific to PCs. Something like 90% of home and business computers are Windows-based PCs. Macintosh computers account for something less than 5% of all computers sold. Why would a virus-designer bother attacking a Mac?
Actually, there are some viruses out there specifically designed to attack Macintosh computers. They just don't make the news because 90% of people with computers have PCs and don't give a damn about what happens to their art-fag arrrogant prick neighbour's Mac.

Claim number 6: Macs are faster
Based on what? Benchmark processor speeds have been shown to be pretty meaningless to the majority of computer users, because very few people run programs that suck up ALL of a computer's processing power. Other hardware and software factors, like available RAM or something called a "kernel" which I know nothing about, also have large impacts on how quickly your computer carries out a particular task. And for the cost of a top-end, fastest-available Macintosh, I can buy a barely-past-prototype PC that blows the Mac out of the water in most tasks, and have money left over to buy the software that actually does those tasks.

Finally, there are several "features" of Macs that piss me off.
1. No maximize. Seriously, this bugs the hell out of me
2. The Dock does not include infinity. What? I mean if you slide your pointer to infinity on the side of the screen where the dock is (ie, push your mouse past the edge of the screen), nothing in the dock is clickable. That's just bad interface design
3. Single-button mouse. Right clicking is good. Right clicking is valuable. So are scroll wheels, for that matter.
4. Cute colourful things. Not just the iMacs, but also the damn commercials. How vapid do you have to be to base a $2000 decision on orange-or-blue?
5. Background assumptions. Both the software and hardware engineering in a Macintosh shows obvious signs of rampant paternalism - you have no choice, you will do this thing in exactly the way we tell you, no you're not allowed to change the settings. PCs with Windows do this too, more so in recent versions of Windows, but not nearly to the same extent as the Macs.
6. No upgrades possible. Maybe I'd like to not have to buy a new computer to get a new video card?

OK, I'm done. Back to pretending to work.

Bravo!!! My thoughts exactly! Macs are shit. You know what else I don't get? I don't understand why there's such a significant observable corellation between being a Mac user and having crazy hair! Seriously, if you see a guy on the street with long gray hair sticking out in all directions AND he has a computer, there's probably a 75% chance that he uses a Mac to find 12 year-old boys on the net that he can molest... I love how all non-conformists suscribe to "alternate" ideas that come with their own baggage of conventions etc. You're not a non-conformist, you're just suscribing to ANOTHER CONFORMITY FOR THE SOLE PURPOSE OF BEING DIFFERENT. Way to frickin' go Mac users... way to frickin' go...

I've always heard about Macs being better at graphics. It was probably true in the early days. But I've worked with them in my various art classes. Here's something THEY apparently don't want you to know:

Aside from having to get used to doing CTRL, ALT, Shift instead of Control, Option, ... Loopy thing, it doesn't really make a difference what system I'm working on.

At least I can use my jumpdrives on a PC that actually features visible USB ports not reserved for the mouse.

No comment about 3D editors, since I haven't really looked at any Mac 3D software since some olden days on the B&W Mac of my youth. (The Digital Media lab used a PC for 3D stuff.)