On my move to Guelph, pretty much the first thing I did was buy a cell phone. I signed a three-year contract with Rogers, which I may or may not come to regret. In any case, the free* phone I got has a digital camera built into it. I didn't really want this feature, but in fact it's now difficult to get a new camera that doesn't have a camera function. I played around with it a little bit, but I only took a few pictures because I didn't know how to get images off of the camera and on to something useful, like my computer.

Today I downloaded Nokia's PC software for interfacing with Nokia phones. There's a data-transfer cable (USB) I could buy, and drivers for it on the Nokia website, but this laptop and my new phone can talk to each other (for free) using infared radiation. I have to position the phone in a mildly awkward spot to use this, but it seems to work, and now I can take pictures with my cell phone, move them to my computer, and post them here on my blog.

You didn't seriously think I was going to use this camera for something useful, did you?

Actually, I harbour hopes that I will be able to use my cell phone to take pictures relevant to my work - field sites, insect dissections, collecting techniques and gear, etc. It's quite crappy, taking VGA pictures at 480 x 640 pixels, so the pics are very small and grainy. Here's a self-portrait I took. 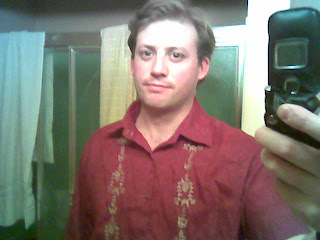 Wow, quality! Also, that's a sweet shirt I'm wearing. I took this picture in the bathroom mirror at my aunt's house, where I was staying for my first week in Ontario.

*It's not really 'free', per se, since I signed a three-year contract that includes an up-to $200 penalty for cancelling. Still, this thing retails no-strings-attached for about $250, which may or may not indicate a certain level of quality and / or sophistication.

That is a totally sweet shirt. And I don't mean that in an Eddie Haskell sort of way.

Can you email me so I know which address you are using? Nice.

In addition, I have to store my comments to your blog in my head because I can rarely get the comment page to load. What is up with that?

I don't know why the comments page isn't loading well for you - I'm not having many problems with it, on this or other Blogger blogs. But Blogger has its bugs, so maybe there's some weird interaction between your browser (and its settings) and the underlying code here.

Sometimes, Blogger just destroys my comments on other blogs. I've gotten into the habit of highlighting my entire comment, hitting CTRL-C, then trying the "Publish" button.

If your problem persists, and occurs elsewhere, perhaps you would want to write your comments in a text-editor (I like WordPad), then copy-paste them in on those occassions when the page loads correctly.

I'll fire off an email today.

I'm sorry, I have to say it... Somehow, the picture quality and lighting make it look like you're wearing blush and eye-shadow. Throw in the shirt and BAM! Metrosexual! And you told me my murse was bad...

Your murse is real; my metrosexual appearance is an illusion created by a shitty camera.

Next time, I'll run the picture through PhotoShop before uploading.

the human brain
for more information visit this site

Hesh, you are a moron. Please fuck off, and never return.