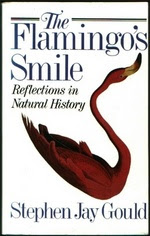 I've been sitting on this Book Club entry for too long. I actually finished reading this book before the new year, but I hadn't gotten around to writting about it until now, almost three weeks into 2007. Oh well. The good news is I discovered an accessible, unsecured wireless network I can use from my couch, so I'm posting this from home.

The Flamingo's Smile is the fourth book by S.J. Gould that consists entirely of essays originally written for Natural History Magazine. They've been collated and then edited a little for consistency and references. The basic layout is the same as Ever Since Darwin and The Panda's Thumb: several sections, each containing a few essays built around a topic theme. There are more essays describing weird and wonderful organisms and adaptations, a great deal of history-of-science, and two sections of essays focused on science and society, particularly regarding "scientific racism" and other perversions of reasoning.

Gould is perhaps the finest non-fiction writer I have read. I really like the way Jared Diamond, Richard Dawkins, Carl Sagan, and many other writers craft their works, but Gould pulls together such wonderfully diverse facts and opinions into every essay, then assembles all these disparate essays into a coherent book. He is a joy to read, and once again I am saddened by his death.

The essays work their way through scientific history since the mid-1800's, along the way stopping to sniff the flowers beside E.E. Just's grave, Lord Kelvin's radioactive decay, and Gould's own work with land snails in the Bahamas. The one essay devoted to his own work, titled "Opus 100", is the 100th essay Gould wrote for Natural History. He starts by stating the two rules he followed rigidly for the previous 99 essays: "I never lie to you, and I strive mightily not to bore you". Then he states he's going to risk the second by indulging in his favourite topic. It's actually a very interesting and entertaining essay.

Carlo pointed out that these Book Club entries are not meant to be reviews, they are meant to be starting points for discussions. So rather than ramble on through this book, pointing out Gouldian one-liners (they are abundant), I'll just wrap up by saying Gould's breadth of topics and ability to consistently write with excitement apparently were not damaged by writing more than 100 essays over more than a decade. Go read this book.

Stephen Jay Gould is awesome. I'm so glad that my supervisor gave me a bunch of his essays to read (for the class that I TA). I'd obviously heard of him before my Ph.D. but I'd never read any of his stuff.

What I really enjoy about his books (I just finished Ever Since Darwin but will refrain from having redundant 'Book Clubs') is that, on top of being interesting, they're directly applicable to my work and studies. I mean, Gould's got a way of thinking that, to me anyways, seems very logical and self-consistent.

I don't necessarily agree with every little thing Gould says. For instance, his treatment of the Selfish Gene is odd. I read both TSG and Gould's books recently, and it seems to me that Gould missed some of the points that Dawkins made about how Selfish Gene theory is fully compatible with apparent selection at the organismal level... Maybe the original version of TSG was different though...

Regardless, it seems to me that Gould's biggest critics (Like John Maynard-Smith) were the very dogmatists that Gould cautioned against. I've heard so many times that 'Punctuational Equilibrium' is dead, but here's a recent Science paper that would suggest otherwise...

I know that Gould spoke at either Guelph or Waterloo a few years before his death. It's too bad that such a great mind passed away when he was only 60. Were he still around, I'm sure he would have continued writing for years to come. We'll miss you Steve...

Sorry, that paper would be here.

You could write a Book Club post about Ever Since Darwin and it wouldn't necessarily be redundant, particularly in light of the idea that these are discussions rather than static reviews. Also, I might have missed something.

I didn't see any references to The Selfish Gene in either Ever Since Darwin or The Flamingo's Smile. Perhaps I just wasn't looking, given that you'd already described that interaction to me so as far as I'm concerned the issue of Gould vs. Dawkins is pretty settled.

Sorry, Gould briefly touches on TSG in Ever Since Darwin (but doesn't comment). In The Panda's Thumb, he's got specific essays about it.