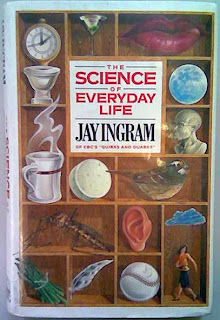 This is a quick read I picked up from a used-book store in Vancouver. Each chapter is a short description of some every-day type of phenomenon and some scientific studies related to that phenomenon. It's a popular-science book, written in a clear, if a little too 'popular' and not enough 'science' style.

I'm not going to talk too much about this book, because it's really not that exciting. The knowledge presented is interesting, but much of it is frustrating in its presentation. The back of the book says "Have you ever wondered..." followed by several topics of chapters as questions. The problem here is that most of these questions are not really answered in the book. Some are answered as "here's a pretty good explanatory hypothesis that's survived some testing", which is an honest account of how science answers such questions, at least. Others, however, are not really addressed in the book. For example, the question on the back cover "Have you ever wondered...why yawning is contagious?" is not at all answered. Yawns are described, some of the research of the previous century on yawns is discussed, but the question of contagious yawning is never actually addressed directly. Most of the chapters are simply descriptions of current problems in scientific research, without a good presentation of major findings, or why I should care about this research question beyond a general-curiosity-about-everyday-life kind of view.

I couldn't find a picture of this book on-line, so I whipped out the camera phone and snapped the above. I did find that you can buy this book for $0.01 through amazon.ca. I got it for $2.99; it was worth about that.

Ingram came to Mac last summer to hold a day-long workshop on 'How to communicate science to the public'. I wasn't particularly impressed.

I hate to bring up Gould again, but in The Mismeasure of Man, Gould states his firm conviction that it IS possible to communicate the wonders of science to the layperson without dumbing it down beyond all reason. Misunderstandings about science may actually come from popular science communication not presenting an adequate picture about what's actually happening.

I don't know about you, but I've seen enough articles on CNN.com that said we found the 'gene for something'; but when I then went back to the original article, they'd found a gene that explained 22% of the variance in phenotypes, blah, blah, blah... You know what I mean.

I do know exactly what you mean.

Having said some negative things about this book, I will say that Ingram didn't seem (to me) to be dumbing the science down very much. He was just burning through big, worthy-of-book-length topics in a few short pages. Plus the discordance between expectations set up by the back cover, and the actual content. To be fair, Ingram may have had very little influence on what appeared on the back cover of the book.