Melanie, my fantastic, fabulous, gorgeous, temporary girlfriend, owns a troublsome little '92 Hyundai Excel. This summer has been an epic of disasterous malfunctions and ill-luck for her car. Right now, it's back at the mechanic's.

The mechanic is an interesting fellow. He's very friendly, but talks very, very quietly, and seems unconcerned with such pedestrian thoughts as "billing". Anyways, because he's got Melanie's car back just after doing major work on it (dead engine, "new" engine now dead too), he's loaned Melanie a car to use for a while. 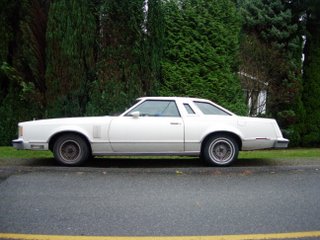 The Loaner Car of Doom, a 1978 Lincoln Town Car (Wikipedia's take on it here). Serious Awesomeness
I like this car a lot, it's hilariously fun to drive, and it's fully loaded. This is a 1978 vehicle with more power- and special-features than most luxury cars today. I could go on, but I have to go TA a lab.
Posted by TheBrummell at 3:21 pm
Labels: Procrastination, Stuff

I changed my mind. You should go to Guelph for PhD studies so you can steal that car and bring it with you. YES!

Do you parents know about Melanie yet? Or her convoluted title? Give us the goods.

Yes, apparently I now have one more reader - HI DAVE!

My parents know about Melanie, but I talk to my parents so infrequently that I don't know if they care, other than being happy that I'm not lonely.

The car has some significant downsides, besides the obvious things like late-70's fuel consumption and an unknown history. For one thing, Ford/Lincoln seem to have decided long ago that they don't need tall people as customers - there's insufficient leg room, even with the power seat pushed all the way back and rotated back/up. The back seat is miniscule - I'd be embarrassed to put any non-parapalegic/double-amputee friends in the back. The side mirrors are ridiculously small - they're about 5 cm per side, and the cable-and-rod adjustment system, while cool for 1978, leaves something to be desired when choosing the appropriate angle. There's no rear windshield-wiper, so rear visibility is basically nil in moderate rain.

Having said that, there are some highly cool features that lead me to fantasize about acquiring (for cheap) a big sedan of a similar vintage from another manufacturer - perhaps a Buick or an old Chrysler (eg, the enormous Chrysler Imperial). The ideal situation would be to get a chassis and body combination that's in very good shape (ie, no rust), and have the budget (say, $5000) to replace the engine with something much newer and more fuel-efficient (without losing power; modern engines are much, much better at extracting energy from gasoline) and upgrading the suspension/brakes, along with some accessories. Just fantasy, I know, but piloting that boat provokes me to wild dreamings.

I've got 10 minutes to kill before class here, so I'll list some of the amazing features of this beast.

Lights galore
The headlights are getting old, and I think a set of new bulbs would help. Likewise the console lights are dim - I suspect they're original equipment. The overhead light has spotlights that point at something useful - the console, so you can see where the windshield-wiper adjust is. The ignition key-hole is illuminated, as is the door lock (little blue and orange lights, respectively). The dome light stays on for about 5 seconds after you get in, and if you test the locked door, it comes on and stays on for about two minutes.

Front end
The headlights have solid covers that protect them when not in use. If you turn of the ignition, then turn off the headlights, you can faintly hear the motors ssshummpphhh-ing the covers down. If you happen to be pointed at a reflective object when you start the car and turn on the lights, the lights seem to gradually turn up in brightness as the covers retract. Also, bumper horns.

Back end
More bumper horns, and a trunk big enough for three corpses and a picnic lunch. The spare tire, full-sized, is almost lost in the vastness.

Interior
Yes, it's too small - but it's very, very wide - the passenger is far from the driver. The seats are covered with crushed red velvet, over very soft cushions that you sink way down into. It's clean, and smells vaguely of "old luxury car" the way all big old luxury cars do.

Driving Experience
The "nose" on this thing sticks so far out you're sitting behind other drivers, behind most back-seat passengers, when lined up at a red light. It's freakishly quiet - there's no detectable road noise below 90 KM/hr, when a faint whistle of wind over the car can be heard. The engine is almost silent. Speed bumps and curbs are felt as a sort of soft vertical squishing, rather than as hard bumps. The turning radius is amazingly tight, and the front bumper hangs so far in front of the wheels it feels like you're sweeping a vast volume clear when making tight turns. Fun.