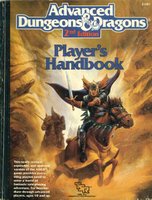 I know it's Monday, and I know I'm 2 rants behind. But I'm just not that angry right now. Maybe in a couple of hours.

Anyways, buried in my ideas file, I have a note to myself that I could blog a bit about the Role-Playing Games (RPGs) I have played. I've actually only ever played one game - Dungeons and Dragons. But I own several more.

OK, nobody can really claim to be a gamer without owning, for at least a brief period, a D&D rulebook. I have a bunch of AD&D second edition books - Player's Guide, Dungeon Master's Guide, Complete Fighter, etc. This is the game that got me into gaming, even before I met the vast variety of good board and card games out there - those will be the subject of another post. I never played AD&D long enough with one group of people to have a character really get anywhere - the highest-level PC I ever had was a 7th level thief named "Silth-not-Filth", after a Sorcerer I had in Bard's Tale. Character names are usually haphazardly generated, for me at least. 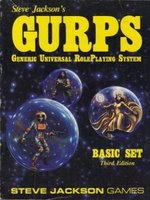 Another set of rulebooks I own, but have never actually played, is GURPS. The name is somewhat silly, but simply stands for "Generic Universal Role Playing System", and apparently started as the temporary name of the in-house development at Steve Jackson Games. More about GURPS here.
I own about 30 GURPS books, all 3rd edition. Fourth edition just came out, but is horribly expensive - I don't blame the company for this, I blame my own lack of disposable income. Happily, with the release of 4th Ed, SJG has dropped the price on almost all 3rd edition stuff they have kicking around their warehouse to $10 per book - and they used to sell for about $25-$40. They produced somewhat more than 200 3rd Ed books, so there's lots to choose from. Not everything 3rd is marked down, though - some of the semi-autonomous stuff, like Transhuman Space, is still more expensive. Oh well. 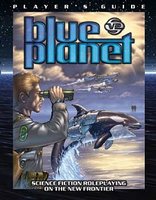 The last "serious" RPG I have is Blue Planet. I saw this on the shelf of my local game store in Victoria years ago, and instantly decided that, as a biologist, I needed to own this game. I had to special-order it through Gerry (owner of the shop and himself worthy of a post or series of posts), but definately worth it. Perhaps the most interesting thing about this game, besides the background and setting, is the damage system. Most RPGs have some variant of "hit points", in which your character takes damage in an arithmetic fashion until critical junctions - such as zero - are reached. In Blue Planet, each attack rolls 3 dice, and the level of damage to the target is based on how many of those 3 dice end up under some critical value. The critical value is based on the power of the attack (eg, machine guns have higher base values than pistols) and the cover or armour of the target. Zero dice under the value means no damage, one means "light wounds" and some removal of capabilities of the target (slower movement, reduced sensory abilities, etc), two means "serious wounds" with rather large effects on the target (can't move, stunned, can't use hands, can't see, etc), and three means "critical wounds", and the target will die rather soon without major medical attention (ie, hospital ER). This is to simulate the fact that even a .22 can kill, and a .45 can cause a trivial wound, in rare cases.

I also have a couple of non-serious RPGs. Kobolds Ate My Baby relies on the BEER engine, and is designed to be as simple (and lethal to PCs) as possible - almost everything is just make-it-up-as-you-go, and a handful of important numbers. All hail king TORG!
Ninja Burger is from the same people as KAMB, and also runs on the BEER engine. I have never actually played either game, but the rule books are great fun to read.

Strangely, SJG also lists another game I have, Tribes, as an RPG. Again, I've never played that one, but I consider it much more of a board game than RPG. Another purchase, that, as a biologist, I needed to own.

Hopefully some day I'll find people to play these games with. *sigh*, the lament of the loney gamer.
Posted by TheBrummell at 3:03 pm
Labels: Games, Procrastination, Stuff

One thing I've always been weary of however, are the role-playing systems that try to have different mechanics just so they can say that they're NOT like DND. Personally, I believe that DND probably does have the most robust, playable RPG system (though it is getting a bit too over-involved lately, i.e. extensive optional rules).

Take for example the Star Trek: The Next Generation RPG. I played this one briefly with a couple of friends. While fun, the game mechanics (which revolved around only using a 6-sided die) were a tad broken. For example, during character creation, the sourcebook told you that the GM had to intentionally arbitrarily adjucate skill point allocations, simply because the rules would allow, say a medical officer to be a kung-fu master. Such that my doctor kicked the shit out a Klingon security officer who was in my way...

Anyways, all these game systems that only use a D6 (Shadowrun, ST:TNG) or D10 (Vampire: The Maskarade) always say that they do this to save players money. The limiting cost in your stupid games are the books dumbasses!!!! A set of ALL 6 different RPG dice is what, 10 bucks?

Anyways, sorry for the mini-rant, maybe I'll start posting shite like this. Mind you my blog enjoys the readership of several people in my Dept. that need not know ALL of my geeky obssessions...

Alright, sorry. I was thinking about this, and I've just gotta rant a bit more. Palladium was the worst RPG system I ever played (Heroes Unlimited, RIFTS etc...) I was like 11 years-old and it seemed cool at the time, but looking back, it was RETARDED. Here are some examples of the broken mechanics:

b) The damage model in the game was completely BROKEN. I had a non-super secret agent (normal guy) who was well-trained in hand to hand combat. My handgun would do 5D6 damage, my machine gun 1D6 * 10 (but then I'd be out of ammo) or I could throw 5 punches for 1D6 + 15 a piece!!!

c) For that matter the entire combat system was broken as frequently the attack/parry/dodge/armour rolls were superfluous because of the fucktarded bonuses. I once had a legitimate character who would attack with his super-powers and have a + 32 to hit. Roll a D20, add 32, try to beat 17...

d) Also, the min/maxing/ balancing system was also retarded. For example, particle-beam weapons were the most powerful things normal people could use (3d8 * 10 damage). But, to balance this, you needed to roll above a 17 to hit, irrespective of the target's armour (with your ridiculous bonuses). But some superhero with thunderbolt shooting power could slam you multiple times a round for similar damage with no penalties restrictions!!!

e) Finally, the levelling system was downright laughable. For example, gaining a level would give you 1D6 extra HP. However, a first-level superhero with the Alter Physical Structure: Metal power received a one-time character creation bonus of 800 SDC (basically HP). So 1st level characters were, for all intents and purposes, only minorly weaker than HIGH LEVEL HEROES.

f) Fine, one last one. In the case of using alternate races (like elves or dwarves) unlike in DND, the stats DON'T BALANCE. So, for example, overall an Elf is numerically and statistically superior to being a human. I remember in the Palladium RPG, THE ENTIRE PARTY were these lizard people who got to roll 5D6 instead of 3D6 to 4 of there 8 stats and received only a 2D6 instead of the normal 3D6 to their physical attractiveness, because they're lizards of course! ARGH!!!!

Yes, that looks like sufficient material to form a rant all its own. Perhaps we've discovered a new concept - the Minimum Rantable Unit (MRU).

I played Rifts once, with an Ueber dork in HS (I didn't realize he would be there, I thought his less-fucktarded brother was running the show). I can't gain any info from that experience because of the confounding variable of the GM's extreme irritating-ness.

Like I said, I've never actually played Blue Planet, I just really really like the setting (and the art in the books, while always very secondary too me, is also quite good, IMHO). The examples of play and explanation of the rules seem OK, perhaps there is some major flaw I haven't seen.

Character creation, in both GURPS and Blue Planet, looks very balanced. Both are based on points systems, although to a slightly different degree. In GURPS, you get a big bucket of points to spend on EVERYTHING. In Blue Planet, you get a set of points for physical characteristics, then a separate set for social attributes (reputation, wealth, interesting backstory features, etc), then another separate set for skills, then... and so on. In both systems, racial characteristics are generally balanced, either by providing a mix of advantages and disadvantages, or by making highly-capable races (eg, Tolkein-esque Elves) very points-expensive.