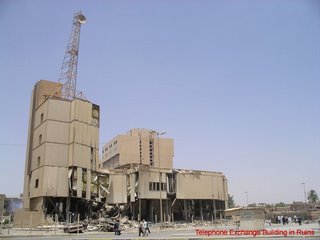 This is about 8 days late, so perhaps I'm getting better. As usual, apologies for lateness, none for content.

This week's rant is about the Telephone, that ubiquitous modern device.

Allow me to start by stating I have nothing against telephones or telephone use per se, I have a problem with a few of the practicalities of the machines and their use. I offer few or no solutions to this problem.

Why do people feel compelled to answer a ringing 'phone? Have you been trained since early childhood to respond to strident ringing noises by interrupting whatever you are currently doing and rushing to the offending object? I've worked retail, where it was part of my job description to answer the phone - after all, that's either a potential customer or my boss calling. But not at the expense of talking to a customer actually in the store! This is why answering machines were invented - so I don't have to stop talking to a person, or working, or wanking, or whatever to lunge for the 'phone!

A ringing telephone is equivalent to bursting into a room with one's eyes closed, and yelling "TALK TO ME!!!". Why do some people operate under the assumption that it's a courtesy to call someone? Send me a bloody email if you just want to pass on information. Urgent news, I suppose, can justify a 'phone call. "Urgent", in this context, refers mainly to impending or ongoing natural disasters or localized violence. It does not refer to a death in the family (why do I need to know this RIGHT NOW?), a birth (see previous comment), news of a promotion, or pleas for resources (eg Time, Money).

I do not currently own a cellular telephone. The next time I move house, I will abandon my land-line, and join the hordes with ringing pockets. But, do not expect this useful device to be turned on at all times - I will call you, not the other way around. For I am a hypocrite. Oh well, just don't bloody call me unless you know for sure it's either Urgent (see above) or you're calling me back. Especially if you're trying to sell me something.

Addendum: in searching Google Images for "destroyed telephone" to steal a picture for this post, most of the results were of destroyed telephone exchanges, primarily in Iraq. So I posted one.
Posted by TheBrummell at 4:15 pm
Labels: Rants

Ah, a true insane rant. My problem isn't so much with people answering their phones (though I don't understand why it's so important either). Rather, it's with people who have long-ass phone conversations in inappropriate places.

There is no need for you to talk with your friends in the lab at 11:30 in the morning for a half an hour. NONE. Your friend calls, you say, "Thanks, I'll call you when a) I'm alone or b) I'm at home."

Basically, for all intents and purposes, to everyone around you, a phone conversation is EXACTLY the same as talking to YOURSELF. It's PSYCHOTIC and ANNOYING. But remember, as a shrink once told me, "A psychosis or neurosis is only a problem if it negatively affects your life, or other people."

So shut the fuck up when you're talking on the phone...