Today is my 41st birthday, and I've been thinking about the last couple of years and how much has happened in my life. A year ago, I was in Québec (the city in the province), and a year before that I was in Waterloo, Ontario. Today, I am in Armidale, NSW, Australia. It's been quite a couple of years!

Being a post-doc is weird; this is something I say fairly often, probably a couple of times per week. I have been a PDF (post-doctoral fellow*) for about four years, and in that time I have done what seems like a pretty broad range of things at work. Besides the frequent moves - this is my fourth post-doc position, and more on that in a moment - I have taken turns working at particular skills that are typically important skills for university professors - and that is my career goal.

* Technically, I am a Fellow now, but my previous positions since my PhD have been "post-doctoral researcher"; the main difference is funding, in that a Fellow is supported by an award or funding from outside of the lab group or PI (primary investigator; a professor). Here at the University of New England, I have a contract and independent funding and my job title is officially a Post-Doctoral Fellow.


My first PDF, at the University of Waterloo, lasted about 2.5 years. In the final half year or so I started seriously looking for my next position, and I was contemplating relaxing my standards for advertised jobs I would apply for from strictly tenure-track to include interesting PDFs. The main busy period for such applications is the fall in Canada, but before I really got into a serious search - with a hard deadline for my position at U Waterloo of October 31, 2017 - I was offered a PDF with a professor I had met several times and already had the beginnings of a working relationship with. My U Waterloo PI was Dr. Maria Strack, and Dr. Line Rochefort at Université Laval had been one of Maria's PhD supervisors, about a decade earlier and they continue to work together.

I moved to Québec at the end of September 2017, and in the personal chaos I lost track of world events; my first day of work at Laval was the day after Catalan held a referendum to separate from Spain - an event closely watched by many in Québec. My contract at Laval was short-term because Line was at the end of her main Discovery grant and had not yet secured funding for the next five-year period. She was applying for two other major grants in addition to renewing her Discovery, and needed a person to divert attention from her so she could focus on grant-writing ahead of deadlines in October and November. My job was largely to work with Line's students and others as the English-speaker: I was the only native Anglophone in a lab dominated by Québecois but with plenty of other nationalities and languages as well. I learned that I quite enjoy helping ESL scientists with the intricacies of technical writing in English.

The grants Line was applying for included funding for a PDF, and the unwritten agreement was that should any or all of the grants be successful, that position would be mine if I wanted it. The dates we would learn about the success or lack thereof of these grants were in late March, and my 7-month contract at Laval was set to end at the end of April. In late January, as I was struggling to make plans beyond that end-April horizon, other professors I had worked with forwarded a job ad to me, at Laurentian University in Sudbury, Ontario.

Dr. Nathan Basiliko paid for me to visit Laurentian in late February - about a week after I first spoke with him and other professors at Laurentian - for a large meeting to bring together nearly everybody involved in a large collaborative grant they had been awarded. That was an interesting meeting, and at the end of the two days I agreed to move to Sudbury to work with Nathan. A big part of my decision was the 2-year contract on offer, as well as the opportunity to expand my expertise into different areas of Restoration Ecology.

Sudbury is a fantastic place, and I thoroughly enjoyed living and working there. After only a few months in Sudbury, I was made aware of an opportunity in Australia, to work with people I'd met when I visited Charlie in December, 2017. Dr. Romina Rader and Dr. Susan Wilson were willing to Nominate me for a UNE PDF, with the first application deadline in early July. There's a long story there, but the upshot is we were successful at the first stage, and I was invited to complete a full application with a 5-page proposal to replace the 1-page version in the first application, due in early September. We were successful again at this second stage, and a Skype interview was scheduled for mid-October; I was told I could expect to hear the decision in about a week.

Around 10 days after the interview, I was informed that UNE was offering me the position. This converted November and December into frantic preparations to move around the world. Charlie had joined me in Sudbury and we had to coordinate this massive undertaking while both of us continued to work - me at Laurentian, trying to wrap up what I could before leaving, and her with the lab work and data analysis stemming from her "summer" job in Sudbury.

Somehow, we accomplished everything, and moved out of our Sudbury home and drove to Calgary just before Christmas, 2018. That is another story of its own. We were granted our Australian visas and booked our flights somewhere between Winnipeg and Regina, and flew without further drama on January 8th, and over the International Date Line on January 9th, consigning that day to the Time Vortex and landing on the 10th.

Australia has been excellent and wonderful so far, and promises to continue to be so. I baked myself a Birthday Cake today and both Charlie and I have been relaxing and taking it pretty easy all day. On Charlie's suggestion, my Sunday Drives - restarted after a long hiatus in Ontario and Alberta - have become "Sunderday" Drives, a term coined by a good friend of Charlie's in Sudbury. The Sunday Drives were never tightly linked to any particular day of the week, but the move to Saturdays (three such drives have been completed so far) flips the feelings of the two weekend days. Previously, Saturdays often became unpleasant errands-and-chores days, with long hours spent shopping for non-exciting, necessary things and little time to maintain our home with such tasks as laundry or general tidying-up. Now, Saturday mornings are given to shopping for furniture and other necessary things (shops, especially thrift stores, are open limited hours on Saturdays, often closing shortly after noon, and are largely closed entirely on Sundays), with our departure for more fun driving and sight-seeing happening after lunch. This makes Sunday a wide-open day where we can each decide to accomplish as much or as little as we like. Today, for example, I hung an Art on the wall, and baked the afore-mentioned cake. I'll make supper and maybe wash some dishes, otherwise the day is filled with far less useful tasks.

I've been trying to get into a habit of photo-editing, with some success, so here is a recent photo. 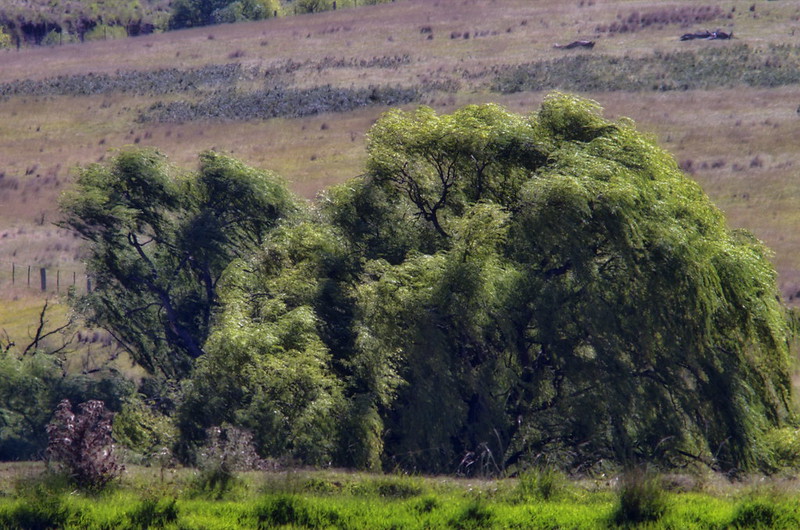 And don't forget about dear Toxo. She has been adopted by Martin's parent and living in Calgary. Hopefully the end of cross country travel for her.