Thursday afternoon I needed to get groceries, and because of this project I sat down with the cookbook and came up with a list of recipes to make that day and over the next few days. Supper, after a rather long time at the grocery store - some of the ingredients are not things I have purchased often, or in some cases at all, before - was a combo of three recipes, helping to keep me (close to) on-track on this project.

The meat course was from the "20 Minutes or Less" chapter, and indeed this recipe was completed quickly. I was interrupted by a phone call in the middle, so the actual elapsed time was a little longer, but it was still pretty fast.

No substitions this time, although perhaps an argument could be made about the "maple-flavored syrup"; I used real (home-made!) maple syrup, which certainly qualifies as maple-flavoured given I've seen the individual trees that my uncle taps for sap every year to produce the syrup I used. At the store I considered substituting boneless, skinless chicken thighs for the breasts called for in the recipe, but decided to embrace this project, damn the expenses. And boneless, skinless chicken breasts are eye-wateringly expensive. I halved the recipe (no success on the buy-a-freezer front, yet) but even two breasts* was a considerable fraction of the (high) total cost of that trip; I paid around $11.50 for them, at over $25 / kg.

* I'm not sure if the two breasts each represent one half of a chicken's pectoral muscles, or each is from a separate bird. Something I'll have to keep in mind and investigate the next time I cut up a whole chicken. 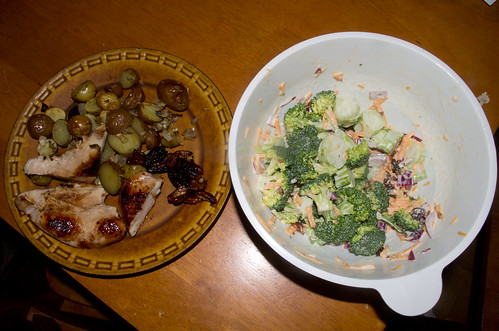 This was delicious, all things considered. I've included a photo showing the complete meal, rather than the individual recipe-components. Hopefully this project will improve my photography as well as my kitchen.