I bought enough basa fillets for about four meals (at least!) so I decided to make more room in my freezer, still lacking a stand-alone unit, and broiled up a trio. I don't yet have a broiling pan, an oversight I covered with my metal trivet balanced on a cookie sheet, but I'll need to get a proper one before I tackle any other broiling / roasting recipes. The variant for this recipe is fillets, and the instructions are nearly exactly the same as for fish steaks. 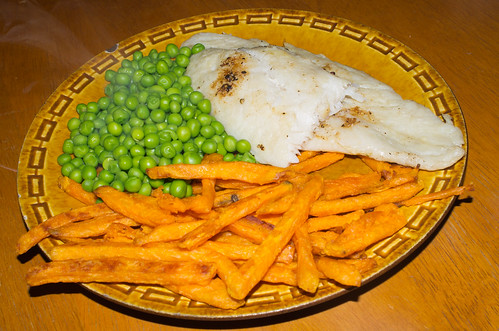 These were actually kind of bland, but that's not really surprising, they were seasoned only with butter, salt, and black pepper. Still, not bad and nearly as quick as advertised. I'd picked up some sweet-potato oven fries and broccoli at the grocery store, mainly because I had the realization in the frozen isle that I hadn't bought anything that could be described as "prepared food" since I began this project. Frozen pizzas were a prominent part of my diet last year, and I'll probably break down and buy one or two eventually but so far I'm not really missing them.