I played Pathfinder with my friends on Monday night, starting about an hour after I got home. I threw together this meal from the "20 Minutes or Less" chapter, and even though it actually took closer to 30 minutes (this is a pattern for me) it worked quite well. Fortunately, I can mute my microphone through roll20.org, the website that lets us play this "tabletop" role-playing game (RPG) online: nobody else had to listen to me chew.

I guess you can buy mushrooms in little jars in the USA, because this is the second recipe I've done from this book in which I've substituted a 10-oz can of mushrooms for the called-for 4.5-oz jar. I like mushrooms, so it was no problem. The basic idea is to cook up this tomato / ground beef / vegetables sauce and slather it on some toasted French bread with Parmesan cheese. The instruction "French bread" is a little vague, though, I think they must be using much larger loaves than what I bought. I used what amounts to a baguette, though at some local grocery stores I know I can sometimes buy "French bread" that's wider. 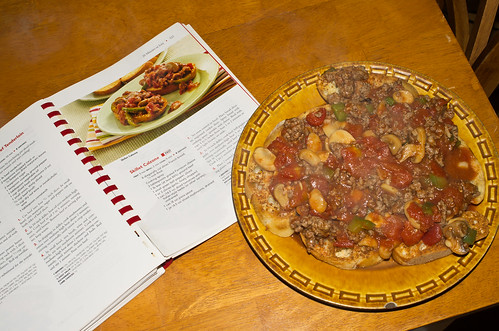 This handily made enough leftovers for a second meal. I'm not sure where the name comes from, as a calzone is a kind of stuffed pastry and this doesn't involve anything like that. Also, the use of a 10-inch skillet seems wildly inappropriate, the volume of sauce - even accounting for my excess mushrooms - is far larger than would comfortably fit in my 10-inch frying pan, and a quick Google Image Search suggests I'm not wrong in thinking "skillet" is a synonym for "frying pan".
Posted by TheBrummell at 8:49 pm
Labels: Betty Crocker, Cooking, Food and Drink, Games, Life, Musing