Highly unusually for me, I got up early on Saturday morning. I took a co-worker to the St. Jacob's farmer's market because she wanted to find a source of meat and eggs that she could trust - she would rather not eat factory-farm raised animals. Fair enough, and I'd been meaning to check out this locally-famous farmer's market anyway, for deals on large amounts of fruit to make into wine.


The market turned out to be a bit overhyped, I actually prefer Kitchener's farmer's market, it's less obviously trendy-and-bourgeoise. But I bought a chicken! From people wearing slightly-more-traditional-clothing! Plus some sausage, from a woman wearing a bonnet! When in Rome... 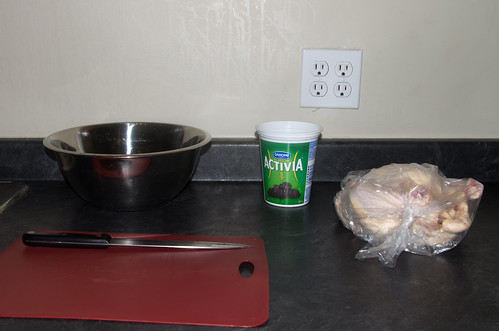 Preparing to cut up the chicken. The steel bowl is for good parts as they come off, the prune yogurt container for garbage (in this case, mostly skin and fat; the spine and ribs went directly into the garbage can. I have no need, and no space, for more broth at this time).

I was happy to go to the farmer's market and buy a whole chicken because I feel like I'll never gain skills like "cutting up a whole chicken" if I don't practice them often enough; too long an interval between such attempts and I'll have to start over.

I think the bird I bought was considerably heavier than the 3- to 3 1/2-lb chicken this recipe calls for. A long time ago, I read a kind of write-in trivia-answers thing that I remember mentioned trends in chickens. Apparently, many (American) cookbooks were originally written in the middle of the 20th century, when typical whole chickens at local butchers were under 4 pounds (about 2kg). By the end of the century, average whole chickens for sale had increased in weight, leading to a mismatch between recipes and real-world experience. I experienced that mismatch, this took a really long time to cook! 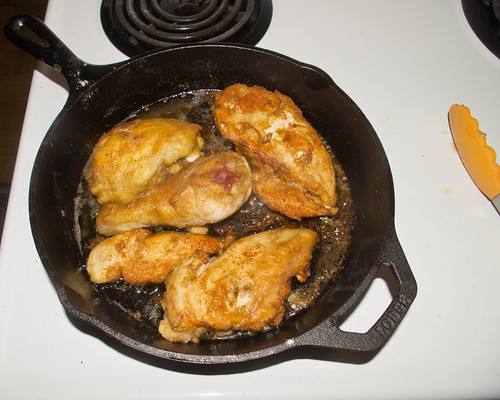 The basic idea is to "shallow-fry" (my own term; a continuous layer of oil boiling in a hot pan, insufficient to submerge the food) the cut-up chicken pieces, first for 10 minutes skin-side down, then 20 more minutes skin-side up. My chicken didn't fit in the pan, I only managed to get about 2/3 of it in for the first round. And that took around an hour to fully cook! The remaining 1/3 took less time, but still more than the 30 minutes the recipe suggests.