There are numerous other "Asian-inspired" recipes in this book, but I find it amusing, as well as telling of the background of this cookbook, that a single recipe stands in for the vast diversity of noodle-based dishes created and consumed by the billions of people living on that continent - to say nothing of the spectacular range of such cuisine available in the Chinatown of any major Western city. Also, the photo for this recipe includes a pair of forks, but no chopsticks.


This recipe is in the Pasta chapter (subchapter: Noodles), possibly as a reminder to the reader that there is a world of pasta beyond Italy. It could just as easily fit into the Vegetarian chapter, because it contains no meat at all, though I confess I am unsure of the ingredients of hoisin sauce. 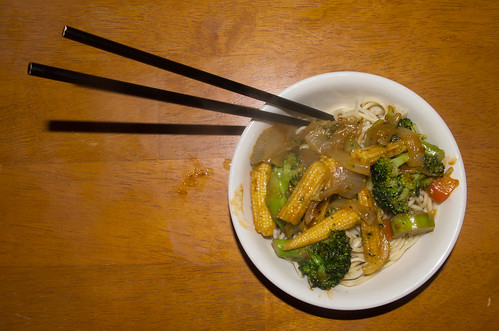 No substituions, though I did cut the recipe in half and I might have messed up a few of the relative proportions. In any case, this was very good. My chopstick skills need more practice; I gave up the painfully slow process about 1/2 way through my first bowl-full.