I have a new job: a post-doctoral position at the University of Waterloo, in Kitchener/Waterloo (K/W), Ontario. My first day on the job will be April Fool's day, so I will be departing Saskatoon on the morning of March 28. This will give me four full days to cover the approximately 3000 km to K/W, and as long as I don't slide off the road (again) I should be able to make that distance easily. 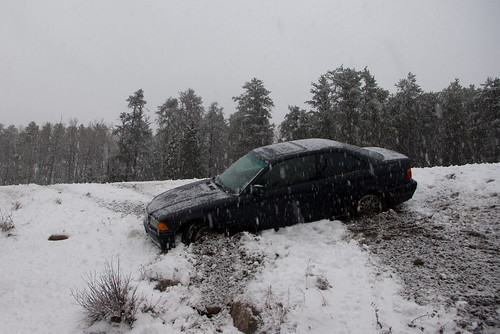 The last time I drove through northern Ontario in late winter / early spring, I had some traction difficulties.

I will be working in the Department of Geography and Environmental Management, with Dr. Maria Strack. Her work has included considerable research into the greenhouse gas exchanges of wetlands, particularly peatlands that have been harvested and restored. Most wetlands are nitrogen-limited; the abundant plants and other organisms living there have adapted to scarce nitrogen supplies and as a result most wetlands are not thought of as strong sources of N2O. N2O is a powerful greenhouse gas, and while wetlands are strong sinks for CO2 (because of vigorous photosynthesis) and sources of CH4 (because of anaerobic, organic-matter-rich conditions below the surface), their contributions to N2O emissions are not well known. My job will be to try to fill that knowledge gap by examining N-cycle processes such as nitrification and denitrification - both of which are potential sources of N2O - in some Canadian peatlands.

I plan to move to K/W with as little in the way of possessions as I can. If I take no furniture (the desk I am currently writing this on can be dissassembled, and I might bring it) I have no need to rent a truck, thus saving potentially $1000 or more - when I moved from Guelph (effectively next door to K/W) the rented truck cost several hundred dollars and burned several hundred dollars more in gasoline. My car - formerly my parents' Chrysler 300M - isn't the most fuel-efficient vehicle in the world, but it gets much better mileage than a truck. Once I arrive, I'll need to find a place to live (friends in Kitchener have graciously offered to let me stay in a spare bedroom while I conduct this search) and presumably then buy some furniture. My bed, the single largest item I own that isn't self-propelled, is a little more than six years old. It's in fine shape, but when I bought it (when I first moved to Saskatoon) the salesmen informed me it "should last" about 10 years. Nothing else big enough to need a truck to move it is worth anywhere near that much money, so I should be able to buy new and new-to-me furniture in K/W for less than the cost of moving the items currently in Saskatoon. 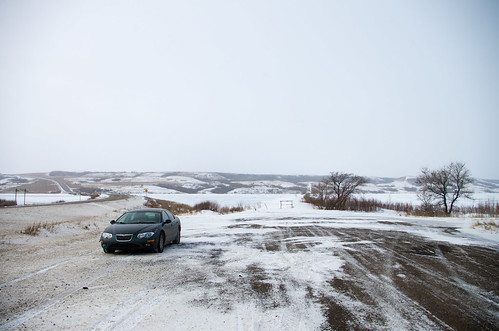 Charlie will be keeping the apartment in Saskatoon, so it makes sense to leave furniture here for her, anyway. We plan to live together again, after she completes a M.Sc. here* and we have a chance to look for new and exciting opportunities again.
My contract is for one year, with the possibility of extension for another two years; current (rough) plans are for a project that will last two years total. So, in early 2017, Charlie will be looking for a PhD position and I'll be applying for faculty positions - at least, such is the plan today.

* In Canadian university biology departments, M.Sc. degrees are expected to take about two years; mine took about three-and-a-half but I'm abnormally slow when it comes to higher education, apparently.

I'm looking forward to the new job, I'm happy to be moving on from the lab and work I've been doing here in Saskatoon, but I am sad to go, too, and I will miss living in the Paris of the Prairies. It will be strange to be back in southern Ontario, and so close to Guelph, but I have friends and family in the area and I fully expect to enjoy my time there.
Posted by TheBrummell at 9:51 pm
Labels: Canada, Car, Grad School, Life, Science, Travel