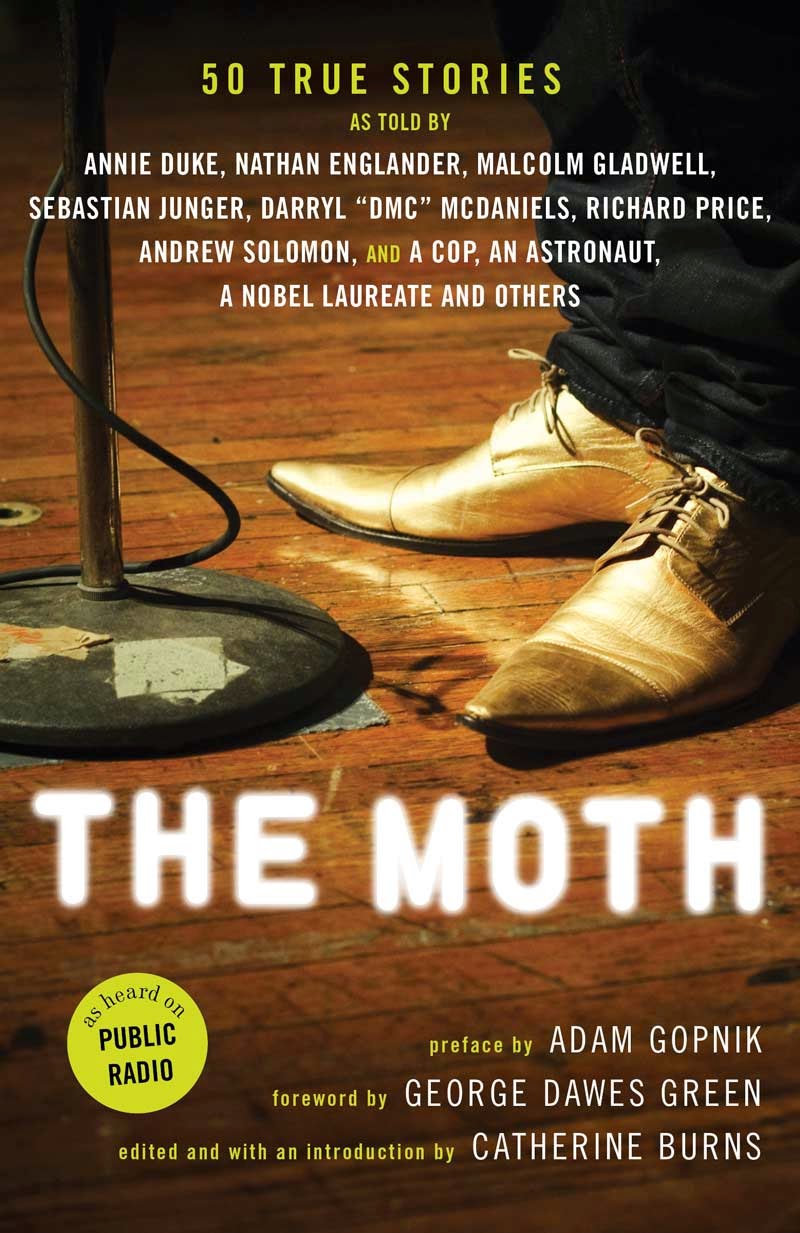 I first encountered The Moth, a kind of storytelling stand-up travelling event, when I clicked on a link to a youtube video (this one, if I remember correctly) from a forum thread about interesting videos. The story was well told, and the format had some polish to it that suggested production by skilled people. A little while later I saw another Moth video, and it’s stuck in my mind for a long time without me doing much with that knowledge there’s this interesting thing out there on-line.

While shopping for christmas presents together, Charlie picked up this book and told me she was going to give it to somebody in my family. I was mildly annoyed (in an amused kind of way), because I’d seen the book and wanted it for myself, but I was adamant that I was not to buy any books for myself at the bookstore, especially not from the ever-too-easy-to-rationalize bargain bin. At McNally Robinson, there are layers of bargain bins, different categories of price-reduced books that end with a cart near the Sci-Fi/Fantasy section filled with out-of-print, discontinued, and otherwise not-going-to-be-sold-no-more books. The Moth was on this cart, for some ridiculously low fraction of its cover price.

UPDATE: I failed to accurately describe the outcome of that shopping trip: Charlie was being sneaky and tricksy and lovely and wonderful, and gave The Moth to me!

Book Club has never been for book reviews, but for discussions spawned by the book in question. It’s hard not to start a larger discussion when talking about The Moth so I’ll break with tradition around here and tell you what I thought of this book: it’s pretty good! Out of 50 stories, told by 50 different people, I was unhappy with only two. Both stories I didn’t like were told by religious people about experiences that were directly tied to their religions.

The first was by a preacher who told a story I found rather unbelievable, involving a group of possibly-criminal bikers at a roadhouse in Texas who had no inkling of the easter story – I simply do not find it at all plausible that any English- or Spanish-speaking person in Texas in the 1960s would have been utterly unaware that a central tenet of Christianity is that Jesus was crucified, buried in a cave, and resurrected three days later. It’s basically the most important part of the overwhelmingly dominant religion in that part of the world, in that time and place. The story reeks of Tall-Tale, a cultural tradition of lying by exaggeration I find highly irritating.

The second was by a young Mormon woman describing her experiences living in New York city, and dating an Atheist. Her blinkered ignorance to anybody else’s beliefs or opinions combined with her complete refusal to confront any part of  her own belief system just pissed me off and made me very much not able to empathise nor sympathise with her played-for-laughs story. She just came across to me as an airhead religious fanatic that suckered attention and money out of fools fooled by her “Can you believe it!?!?” act.

OK, now I’ve devoted two paragraphs to bad stories. The other 48 ranged from “good” to “goddam amazing”. Some people are very talented storytellers. Some people have very interesting experiences to tell about. And some people, some of whom did not tell any of the stories here, are very, very good at putting those two things together in one person, and editing and producing their stories to a very high shine.

The Moth is an excellent book, and I highly recommend it for not only a good read but also as an entry-point to broader discussions about story-telling, the role of story-telling in modern entertainment, and how to tell a good story.
Posted by TheBrummell at 5:16 pm
Labels: Book Club, Life, Mildly Political, Opinion, Reviews