Musings on my Career


Yesterday I submitted a manuscript to a journal. The manuscript describes the work I did in the summer of 2010, and has been rejected from another journal and undergone massive revision, repeatedly, in the nearly three years since the raw data was collected. The journal is, in the minds of myself and my advisory committee (i.e. my co-authors) entirely the right fit for our manuscript, even though the publisher is one of the big, evil, for-profit companies that followers of a certain subset of the sciencey blogs will be familiar with (perhaps as an insulting word, spit out rather than merely spoken). My paper will not be open access – I couldn’t find my advisor to ask when that question came up during the submission process.

Oh, the submission process. I’m not going to rant about it now, I feel like yesterday was taken with that episode, with consequences – sometimes I feel the need (i.e. the complete lack of useful motivation) to take an evening and crumple it up into a ball and toss it into the corner (I played Civilization V, while drinking beer). The only noteworthy part for today, I think, was the weird cognitive convolutions I underwent when choosing from the list of topic areas (“Field plots; Greenhouse gases; Methane; Exchange with Atmosphere; etc.), due to the next paper that’s already in my mind – I had to stop myself from selecting all the keywords relating to the molecular biology that forms the core of my next paper.

The reason I went to Tasmania for four months (besides simply it being an awesome, excellent place to go) was to learn some laboratory techniques while applying them to my samples (my soil samples, and microbial DNA extracted from them) with the clear, explicit intention of creating a major manuscript for my PhD thesis – I think of it as “Chapter 3”, where my already-published paper (Brummell et al., 2012) is Chapter 1 and the manuscript I just sent in is Chapter 2. Those numbers might get pushed around a little, for example if I write “bookend” introductory and summary chapters in the actual thesis, but nobody reads an entire thesis anyway so it doesn’t really matter.

Besides “Evil Scientific Journal Publishers” posts, I’ve been reading many blog posts about academic careers, particularly of scientists (especially of biologists). Thus today’s musings. It’s kind of an odd time for me to be devoting time to this, given my departure for a 2-month field expedition in about 5 weeks and my need to scoop my Tasmanian data into a pile resembling something manuscript-like, but there’s a point that the blog posts I’ve read have not addressed but that I have discussed several times with my advisor; I think it’s also notable that he and I have never discussed Open Access publishing or opened the “Evil Publishers” can of worms (we’ve tossed that can back and forth a few times, and placed it on the counter and talked at it, to stretch the metaphor).

The point: Publish or Perish. It’s a cliché, and all most clichés are at least partly true. Rather than take it in the sense of a dire warning (“Thou Shalt Crank Out Pubs at Thine Fastest Rate!”), my advisor and I have several times discussed this point as a focus aid: Publishing is Always Useful. When considering career options, within, beside, or outside of academic science, no option includes “publishing papers is a waste of time if you go down this path.” Even completely non-science career paths will (theoretically) benefit from a CV with a list of publications on it; even to a non-scientist, there’s a certain prestige and value associated with demonstrably undertaking a complex project all the way from genesis to completion; it’s evidence of getting things done.

So, I am spending essentially all of this week working on my data from Tasmania, trying to turn it from an amorphous blob of numbers into a narrative describing my newly-acquired knowledge.

Instead of, you know, choosing which Rival Empire to antagonize based on the label I’m pulling off of the bottle of beer. 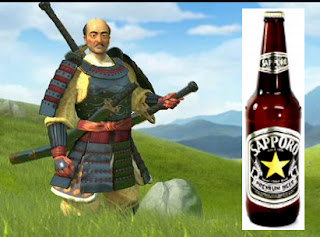 Japan is not actually one of the Rivals in the game of Civ V I started playing last night, but I was drinkin Sapporo beer and in the course of building this image I discovered the wonderful thing that is their website.