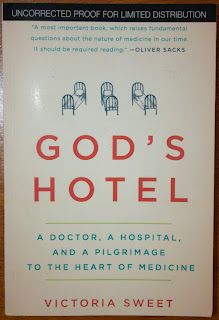 I was sent this book to read and review by an agent of the publisher. An email arrived unexpectedly in my inbox, and once I got over my "it's spam" suspicions (wholy unfounded), I contacted the publisher and agreed to the terms. The terms were, essentially, "you liked The Man Who Mistook His Wife for a Hat, we thought you'd like this, too. Do with it as you will!" How could I say no to that? The book arrived a few days later. I like free shipping, I like free stuff by free shipping even better!

Dr. Sweet describes her 20-year career (possibly ongoing) at a facility in the greater San Franciso area named Laguna Honda. It is a hospital, but it has several interesting differences from other American hospitals. Mainly, it is a long-term facility, with many or most of its patients not expected to be discharged at all. This is in contrast to how other American hospitals are described, which receive money for admitting patients but not for looking after them for days or weeks, so they have a strong incentive to discharge patients as rapidly as possible.

I was sent an uncorrected proof, which appears to be different from the final, published version in a few minor respects. For example, the endnotes are not indicated in the main text at all (presumably the final version includes numbers in either superscript or subscript), and in the endnote section there are no page numbers, just "Page 00." for every endnote. Also, the one diagram in the book, used to illustrate Hildegard's framework for premodern medicine, a system based on fours (four elements – Earth, Air, Water, Fire; four humors – blood, phlegm, bile, melancholia; four qualities – hot, cold, wet, dry; and so forth), is missing, with an empty rectangle on page 182. I was warned by the agent of the publisher that page numbers might change in the final published version, so I won't dwell on specific pages in this Book Club.

As far as a review of the book, in my opinion God's Hotel is very good, written in a spare but not minimalist style with effective use of metaphors; I found it an absorbing and well-paced read. Dr. Sweet has much to say about the state and practice of modern medicine, at least in the United States, and covers a broad spectrum including psychological and chronic illnesses as well as the many links between chronic disabling illness, mental illness, and poverty. She also incorporates the history of medicine well into her descriptions of both the how and the why of major trends and features of her hospital, using specific case studies. Her case studies show her caring for the individual patients, painting a picture of a dedicated doctor who must make difficult decisions and understands the difficult decisions made by others including her patients and the administrative staff at the hospital.

The unique feature of this book, besides the story of Laguna Honda, is Dr. Sweet's pursuit and acheivement of a PhD. in the History of Medicine, focusing on the writings of a single individual, a medieval nun named Hildegard of Bingen. So, Dr. Sweet is a PhD / MD but unlike most such massively educated individuals (I've met a handful of people with such certifications) her PhD is not in Biochemistry or Physiology or Radiography or other Natural and Applied Science fields, it is in History. This clearly informs her writing, and seems to inform her medical practice in useful ways, too.

The book includes many meditations on the utility of ancient knowledge in modern medicine. This is where I expected the book to dive into quackery and the utter nonsense of "Alternative Medicine", but other than a few missed opportunities to emphasize the harm done by practitioners of bullshit and a misattribution of Homeopathy as medieval (it's not – Homeopathy was invented by a raving madman, Samuel Hahnemann, in the late 18th century), Dr. Sweet clearly stays inside the bounds of reality. She makes a clear point about extracting those things that other perspectives on health and medicine can add to modern practice, and leaving behind those things that would subtract. Her overarching theme of "slow medicine", with the metaphor of the body as a garden to be tended rather than a machine to be fixed, is good, and I think it could be added to modern medical practice without need to replace anything that modern medicine is (spectacularly) good at. As I said above, her studies of the History of Medicine inform and improve her medical practice without interfering or inhibiting her use of modern diagnostic and treatment techniques when appropriate.

To summarize, God's Hotel is a very good book. It is full of information and ideas about a great many subjects, with very interesting anecdotes throughout. It's the kind of book I could pick up and read straight through, or nibble on over a few days. I ended up doing a bit of both as I read this book, initially reading a chapter at a time but spending about four hours just plowing through the middle sections one day, as well.
Posted by TheBrummell at 6:52 pm